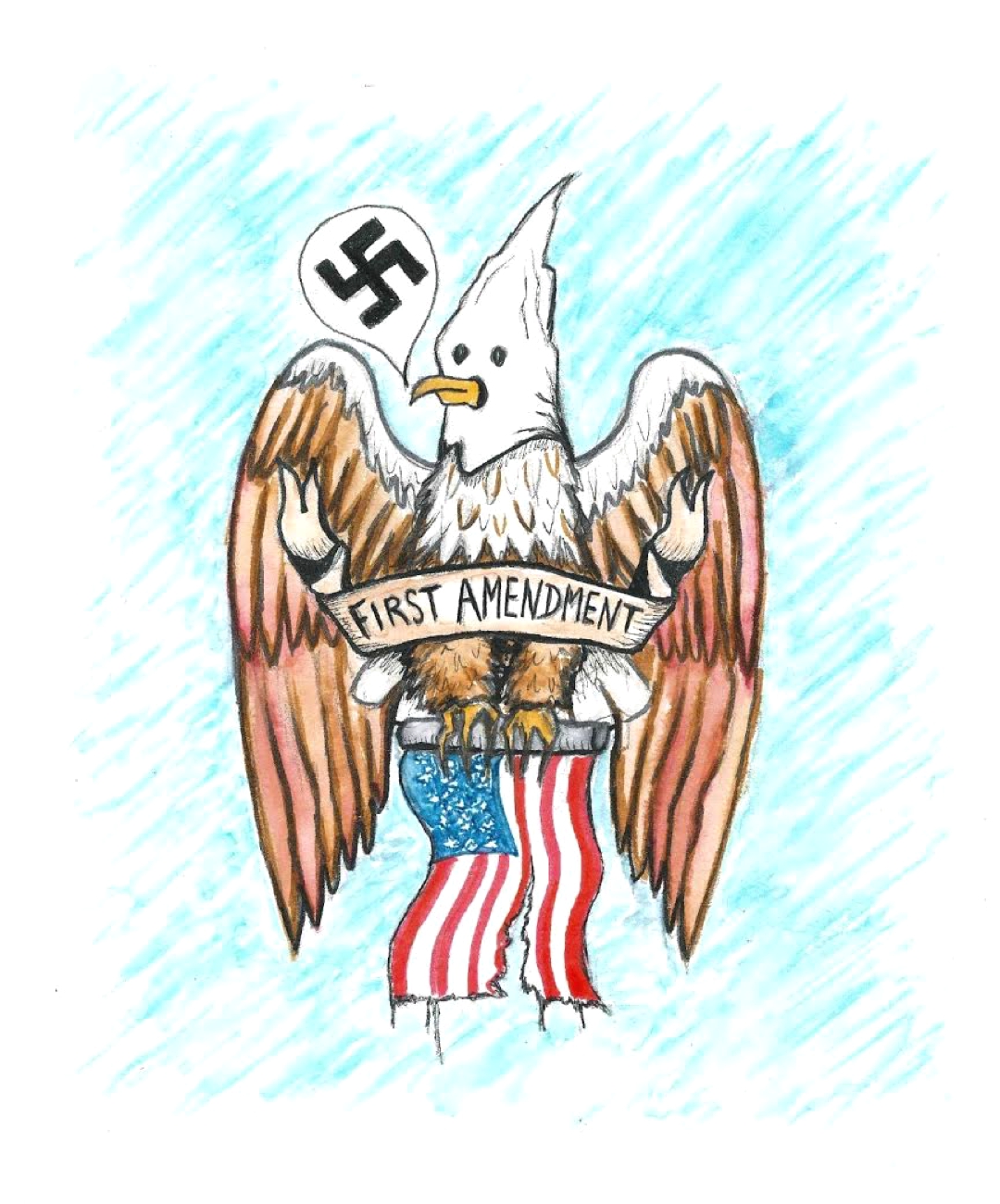 Let’s talk about Milo Yiannopoulos. Let’s not just talk about the fact that this weekend saw leaked footage of him defending sexual relationships between under-aged boys and older men. Let’s talk about why he had no business having any sort of platform in the first place.

Publisher Simon & Schuster dropped Milo’s book deal, the Conservative Political Action Conference canceled his speech and ultra-conservative website Breitbart — in a completely unprecedented twist in which they revealed to the world that they maybe do in fact have souls — put pressure on him to resign. These organizations proved that everyone has limitations on embracing freedom of expression. Which brings me back to the Milo and University of Berkeley, California incident last month, where protesters stopped him from speaking. Subsequently, many on the left and the right rushed to defend his right to free speech. These voices are now silent. So, essentially, I disapprove of what you say but will defend to my death your right to say it — unless you’re talking about molesting children? We need to start drawing the line way before pedophilia.

A couple of years ago, I would have defended Milo’s right to speak on college campuses. I may have even gone to listen to him out of anthropological intrigue. But the last year in U.S. politics has taught me that indulging shock value as free speech is a dangerously flawed argument that propelled Milo and the “alt-right” from the fringe to the mainstream and even assisted in getting Donald Trump elected. If we are to effectively resist white nationalism, we must stop equating free speech with a free platform.

The argument of unswervingly maintaining the moral high ground is becoming increasingly less applicable. It is an oversimplified, idealistic (and failing!) approach to fighting the public relation perfect populism of the “alt-right.” Milo and his cronies — such as Richard “Hail Trump” Spencer — have traded in the white hood for Armani suits, burning crosses for intellectualized bigotry. In response, we need to redefine our understanding of The First Amendment.

Banning hate speech on college campuses is not an assault on the Constitution. The First Amendment protects an individual’s right to say what they want without getting in trouble with the government. Milo should be allowed to spout his white supremacist spiel to friends, acquaintances, whomever, without fear of legal ramifications. But just because Milo can say whatever he wants does not mean he should be able to say it wherever he wants. The Founding Fathers added no fine print concerning institutions being obliged to provide anyone with an audience.

Journalists are beginning to realize that political rhetoric is just not worth humoring. The talk-show “Good Morning Joe” has banned Kellyanne Conway because, according to MSNBC’s Mika Brezenzski, her TV interviews are “askew, off or incorrect.” Rachel Maddow advised viewers to start treating the Trump administration like a “silent movie” because focusing on what they say could, “Send you down 40 rabbit holes a day.”

This sort of approach must also be applied to individuals like Milo — who work and thrive on alternative facts. He was a senior editor at Breitbart — a blog that earns its revenue through mainstreaming conspiracy theories, including Barack Obama’s alter-ego as a practicing Muslim born in Kenya. Milo himself even once tweeted that we are living in a “post-fact era” and “It’s wonderful.” Giving liars a platform legitimizes their lies. It is counterproductive and futile.

Higher education is — and must remain — a quest to pursue the truth. College is built on the foundations of forming logical, coherent and statistically sound arguments. Citing evidence from fake sources — or no sources — is in violation of every campus code of conduct in America.

Milo is also in breach of college ethical codes. Before he even stepped through the door at Berkeley, he had violated their Clause 102.09 that states that one must not commit “Sexual, Racial and Other Forms of Harassment” which are defined as “conduct that is so severe/and or pervasive, and objectively offensive.” When Milo spoke at the University of Wisconsin, Milwaukee, he singled out a transgender student, projecting a photo of her onto the screen, and uploading video footage of the entire incident to Breitbart. According to a Berkeley professor, he might have been planning on exposing undocumented students enrolled there through similar means. Milo must be held to the same standard as everyone else on campus.

Admittedly preventing Milo from speaking will reinforce Tomi Lahren’s depiction of the left as intolerant hypocrites. The Berkeley protesters added fuel to the fire — proverbially and literally. Twitter exploded with raging rants about free-speech hating snowflakes. But what is the alternative to proving the trolls right? Keep on humoring Milo and granting him bigger platforms? Thus, legitimizing his bigotry, providing him with free advertisement? Because the moral heart of the marketplace of ideas will ultimately prevail?

As grotesque as Milo’s comments concerning pedophilia were, they are not the only perspectives that are not worth humoring. As a general rule, we must stop granting these neo-Nazis the luxuries that come with the very same democratic system they want to run into the ground. Not all opinions are created equal.

Leah Gavron is a junior visiting student from London. She can be reached at lgavron@oxy.edu.