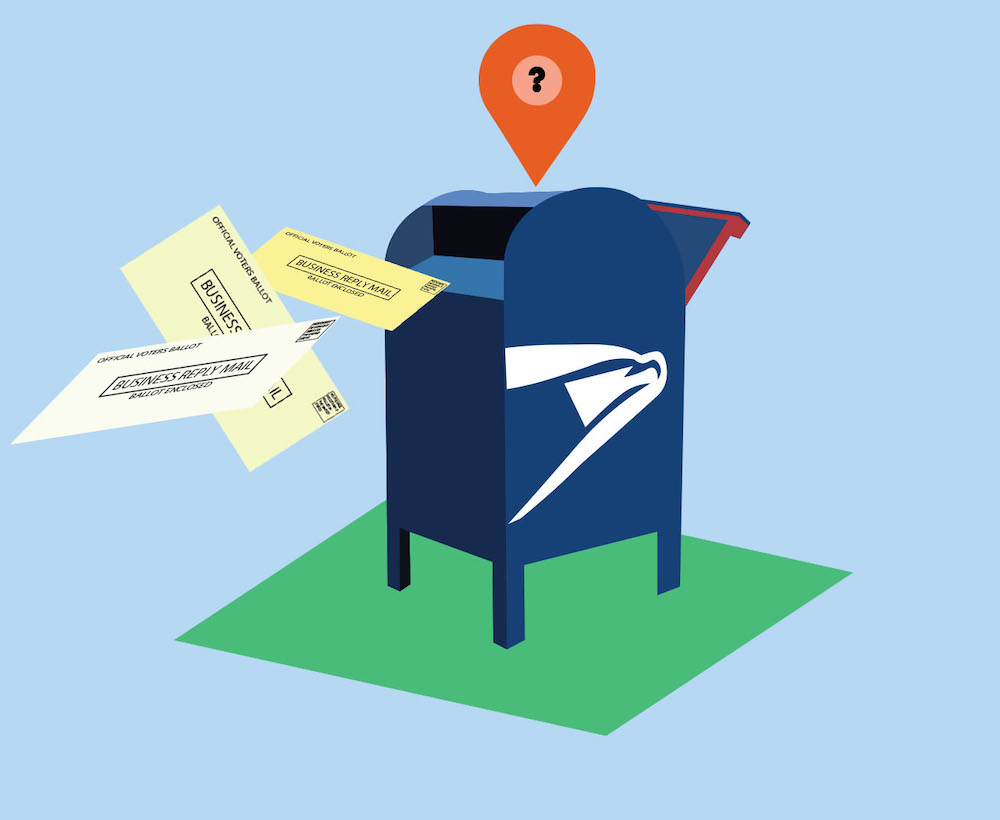 Around the state and in NELA, residents have been casting their ballots through the United States Post Office (USPS) and at official LA County ballot drop boxes since early voting opened Oct. 5 ahead of the official date of the 2020 general election Nov. 3. New ballot tracking resources available in California provide voters updates as the ballot goes through the process of being verified and counted.

This election coincides with the debut of the California Secretary of State’s ballot-tracking website, WheresMyBallot.sos.ca.gov. Using their name, date of birth and zip code, California voters in every county can sign up to receive text or email alerts when their respective county registrar receives and counts their ballot.

At Occidental, Leslie Butler, the 2020–2021 Billington Visiting Professor of United States History, said she voted by mail the week of Oct. 5 and by tracking her ballot, saw that it had not been received four days out. This fall Butler is teaching “The Contested Ballot in US History.”

“We’re really tracking voting in all sorts of ways: the right to vote, who determines the right to vote, how we voted over time,” Butler said. “It’s a crazy system that we have in our country because the constitution leaves, the quote from the Constitution is, ‘The times, places and manner of elections almost entirely up to the states.’”

In recent months, concern over the rollback of USPS operations created uncertainty over the readiness of the agency to handle an influx of mail-in ballots. In Eagle Rock, removal and replacement of a USPS collection box in August led to local speculation and protests over perceived political interference with the USPS.

Butler said absentee voting has a long history in the U.S., dating back to the Civil War to allow Union soldiers to vote. Since 1978, the state of California has allowed all registered voters to vote remotely with no excuse needed.

Monica Vasquez, a longtime Eagle Rock resident, said she has never voted by mail before and prefers to vote in-person.

“I’ve always voted in-person,” Vasquez said. “I always feel like when I get home at five o’clock and I see the news, I feel like my vote’s part of that.”

Vasquez said she usually arrives at her voting center when the polls open around 7:00 a.m. While voting may be an extended outing for others, Vasquez said she has never waited in a voting line for more than 10 minutes.

Vasquez said it was discouraging to hear talk of fraud surrounding the mail-in voting process.

“My parents are elderly. They do mail-in voting every year and they have been for the past 20 years,” Vasquez said. “I just feel it’s discouraging to people and might discourage them not to vote if they hear things like that.”

In North Carolina’s 9th congressional district, Republican congressional nominee Mark Harris won by a small margin that included ballots that had been tampered with and  falsely sent in by a Republican political operative. Prosecutors found the operative, Leslie McCrae Dowless Jr., guilty.

According to USPS spokesperson Evelina Ramirez, the USPS is putting forth extra measures to ensure mail-in ballots are counted and delivered on time for the election.

“The United States Postal Service’s number one priority between now and Election Day is the secure, on-time delivery of the nation’s Election Mail,” Ramirez said via email. “Beginning October 1st, the Postal Service authorized and instructed the use of additional resources, which include but are not limited to, expanded processing procedures, extra transportation, extra delivery and collection trips and overtime to ensure that Election Mail, including ballots, reaches its intended destination in a timely manner.”

This year, Vasquez said she will most likely drop off her mail-in ballot at a polling center, one of the options for California residents.

For this election, Butler emphasized the importance of having a voting plan amidst increasing voter suppression across the U.S. and what she described as a federal attack on the USPS.

Butler also recommends looking at resources such as Vote Save America and Rock the Vote, in addition to tracking ballots online. Butler said she is checking her state’s website frequently.

Ramirez said the USPS will specifically accelerate their efforts the week before the election.

“The Postal Service has also made clear that, as it has done in previous election cycles, the Postal Service will be taking additional extraordinary measures to accelerate the delivery of ballots starting the week before Election Day,” Ramirez said via email. “Voters are responsible for understanding their local jurisdiction’s rules and requirements for participating in an election.”

California’s voter registration deadline is Oct. 19. You can register to vote here.