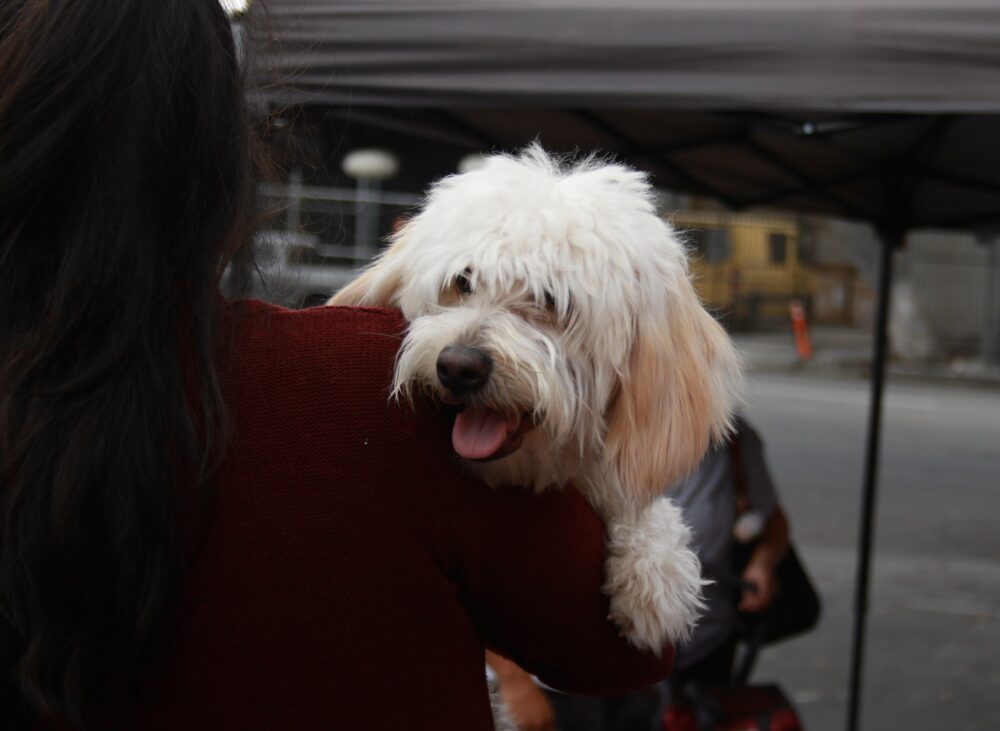 The drive itself was a collaboration between many different local organizations, according to Brian Fitzburgh, a local real estate agent and one of the event’s organizers. Spay-4-LA provided the mobile veterinary care vehicle and vets to perform the procedures, Urban Pet provided “swag bags” for people who participated in the drive and Super A Foods allowed the organizations to use their parking lot, as well as providing $200 in gift cards to give out.

Fitzburgh said that spay and neuter events are invaluable because they help solve the problem of overflowing animal shelters preemptively.

“When too many pets are born that don’t have a home, it floods the shelter,” Fitzburgh said. “Then the shelter has to find foster volunteers as the band-aid to the problem. So by having spay/neuter events, it’s really attacking ground zero.”

Los Angeles resident Javier Azarcoya brought his two dogs to the event and said the issue of overpopulation was personal for him.

“These are my first pets since I got married, so it was our decision to do the responsible things and get them fixed, because the way they came into our life is that their mom was a stray,” Azarcoya said. “Their mom came pregnant to my mom’s house, and my mom took her in and she had seven puppies. And we saw how hard it was to home so many puppies after they come into your life.”

Fitzburgh said offering spay and neutering services for free is important, since many people cannot afford to pay the fees associated with the procedure.

“By doing it as a mobile, you’re bringing it to the community, and trying to reach out to underserved communities,” Fitzburgh said.

According to Fitzburgh, hidden fees are often what can make the spay and neuter procedures inaccessible for pet owners.

“You’ll see where it’s often publicized, that you know, ‘low cost, spay neuter: $50,’ something like that, $75,” Fitzburgh said. “But at first, you’ve got to get a health check. And that’s $75. And then they’ve got to do a blood test. And that’s $40. And then they got to do this and that, and by the time you actually leave with your cat or your dog, it’s $300. And it’s also like an ambush, because you went there thinking it was advertised as $75. So, by being able to bring this into the community, it makes it more available to the people that need it the most.”

Glassell Park resident Vanessa Magaña said that since her vet stopped their mobile program, she had been waiting to spay her cat due to concerns about cost.

“It’s cool that this popped up, I’ve been holding out because I don’t have the money to pay for all those bills and stuff, so it worked out,” Magaña said.

She added that most people really want to spay or neuter their animals, but usually are unable to afford it, explaining the popularity of this free event.

Azarcoya said the low cost of the event will also allow pet owners to invest the money saved on this procedure elsewhere to help animals in need.

“What this allows us to do, we will be willing to maybe donate to a shelter, you know, it frees up a little bit of money to actually help,” Azarcoya said. “It’s really a great service to the community, and honestly it would be great if they expanded it countywide.”

While the event was the product of a coalition of many organizations according to Fitzburgh, the Glassell Park Neighborhood Council awarded a $3,000 grant to help fund the event, which was instrumental in bringing it to fruition.

“They gave a $3,000 grant to help pay for that spay/neuter mobile surgery [vehicle],” Fitzburgh said. “It’s about $4,500 to bring that truck out here, for the vets, the supplies, to pay for the truck. So this doesn’t happen for free. The community is receiving it for free, but that’s thanks to the Glassell Park Neighborhood Council.”

A real estate agent by trade, Fitzburgh said he took the first step in working to help animals in need, and hasn’t looked back since.

“I’m a real estate agent, and I’m an animal lover,” Fitzburgh said. “And I always wanted to try to do something and, like a lot of people, didn’t know what to do or didn’t think I had the time to do it. And at some point I just decided to do something. It always starts with something.”