After a year full of COVID-19 mandatory shutdowns, shifting safety guidelines and falling revenues, NELA’s small businesses have been significantly impacted, especially those along York and Colorado Boulevards.

We spoke to four NELA small businesses that have endured fluctuations that jeopardized their financial stability; a few have managed to hang on while one is closing for good.

National consulting firm McKinsey and Co. published a June 2020 report stating that the restaurant industry was the most impacted by the pandemic, with almost 50 percent of businesses experiencing negative effects. Minority-owned Eagle Rock Public House is one of those  businesses. 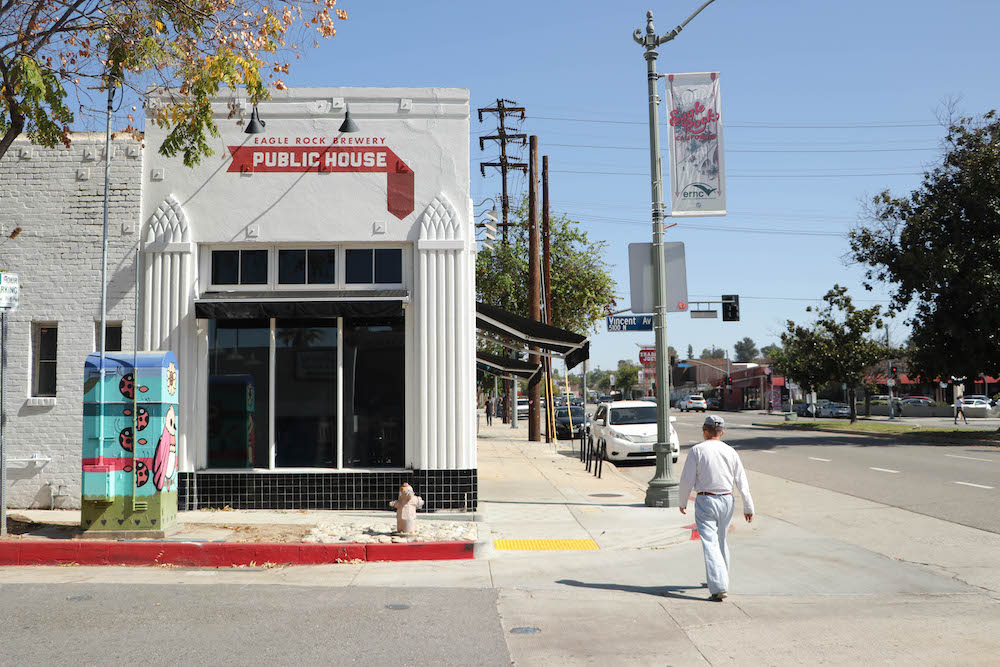 Married owners​ Ting Su and Jeremy Raub of the ​Eagle Rock Public House​ were proud of their bustling eatery they opened in 2014.

“We had a really rad restaurant that we were super proud of,” Su said. “We were really focused on giving people a stellar experience when they were there. Our service team was just all super friendly. You know, just like our regulars got to know them all by name.”

With the initial shutdown, Su said she understood why people hesitated to leave their homes, even to pick up a meal. With less revenue coming in, maintaining a full-time staff became increasingly difficult for Eagle Rock Public House.

“We kept [the staff] on the roster and were trying to offer them hours any chance we could,” Su said.​ ​“But it was a challenge for everybody because we couldn’t obviously offer them enough hours, so I was letting them know about any grant opportunities I saw for people in the restaurant industry and I was telling them to sign up for it.”

The restaurant partnered with local farmers and community members. When the pandemic began, Su and Raub made changes. They took out a federal Paycheck Protection Program loan to pay staff. Additionally, they sold produce boxes and changed their menu so that the food quality would stand up to the demands of delivery, Su said.

“We had to shift the entire menu first and foremost because a lot of our foods didn’t really travel well,” Su said.

Even so, the Eagle Rock Public House closed in November.

“The pandemic was a death blow,” Su said.

Su is not only concerned about her own business, but about what is lost when small businesses begin to close down.

“We’ve lived in Glassell Park nearly 20 years at this point. And so to us, it’s like this is home,” Su said. “It’s heartbreaking to me to see this many small businesses shutting down like within Northeast LA. And it’s a little terrifying because you don’t know what’s going to come in and its place. I’m really hoping it’s not a whole bunch of chains.”

Small businesses are an important part of LA’s economy. According to a 2018 report from the U.S.​ Small Business Administration​, 4.1 million small businesses make up 99.8 percent of LA’s business sector, while providing 7.2 million jobs.

Highland Park pub Johnny’s Bar had to close its doors for the first time in accordance with the mandated city-wide lockdown in March 2020, according to Johanna Cole, a manager at the bar. Since the initial lockdown, it has reopened five times during the pandemic while adjusting to new health guidelines.

The bar was forced to change its takeout menu options and operations to adhere to new state and local regulations, according to Cole.

Eventually bars were allowed to sell alcohol, but in a way that made it difficult to bring in new customers.

“When I sell to-go drinks, I don’t see anybody new. I don’t meet anybody. I don’t meet any of these people, it’s all my regulars,” Cole said. “The regulars are what has kept their business open during this time.”

Cole said the bar’s goal now is to hang on until the pandemic is over.

“We’d like to hold on to some of that like old school vibe, and that’s what we’re hoping to do with Johnny’s. You just hang on to it, keep the lights on,” Cole said.

Changes in regulations have also affected other service-based businesses, such as Stronghold Climbing Gym. Owners Kate Mullen and Peter Steadman said they shut down the gym in March 2020.

“It’s really hard to have been totally closed, we don’t really have any outdoor possibilities so our business has been closed since March last year, except for one month during the summer,” Mullen said.

While Mullen is frustrated about having to completely shut gym doors, she understands the importance of keeping community members safe during this time.

“I understand that we are doing this to prioritize the health of our community,” Mullen said.

The gym owners faced another obstacle. For various reasons, they were not able to get relief from several federal, local and state programs, Steadman said.

“We were forgotten in a couple of different ways. There have been some government programs that were supposed to help small businesses and all of them had just sort of missed us,” Steadman said.

According to Steadman, he is hoping to get relief from the recently passed American Rescue Act after enduring a year where their business generated almost no revenue.

“The transition back to business is going to take time, and the revenue lost will not immediately be made up, which is why loan programs are going to be vitally needed,” Mullen said.

The owners are concerned about clients feeling safe enough to return to any gym but Steadman is hoping that when they do return, they’ll return to small gyms like his own.

Also struggling to stay afloat during these times is the Bob Baker Marionette Theater which has maintained roots in​ ​LA since 1963. The organization moved to Highland Park​ in November 2019, but was only able to operate for four months before closing its doors in March 2020.

According to the Director of Communications, Molly Cox, the theater had always relied on in-person audiences.

“It’s a company that never existed as a digital one and never was meant to be experienced through a screen or in any way aside from going to a show, having a puppet sit on your lap, knock your hat off, and perform directly in front of you,” Cox said. “It was very much centered on the wonder of experiencing this place, walking through the doors and being transformed.”

The pandemic forced the small team to design creative solutions with their limited virtual and potential outdoor options to continue operating. Despite the pandemic pivots​ t​he theater implemented — including road shows, Zoom performances and opening an online store — continuing business operations was difficult, according to Cox.

“The business model dried up overnight for the safety of the community,” said Cox.

As the pandemic continued, the theater experienced drastic financial losses, according to Cox. The theater lost an average of $30,000 a month throughout the pandemic, which eventually made it difficult to cover operating expenses including rent and payroll.

In response, the theater started a fundraiser with a year-long goal of $365,000, according to Cox. Within a month, the organization reached its goal, raising over $400,000.

“It was a moment of reckoning within the organization of ‘can we survive?’, and then a moment of being affirmed by everyone who had been touched by the theater over the past 63 years,” Cox said.

The theater is currently hosting some in-person events, like the peek-a-boo stroll which allows for pods of up to six people to be guided by light and sound cues.

“The narrative behind it was that well, the people have been gone, the puppets have come out and sort of taken over and they’ve created all these new scenes of performing shows for each other and they’re hanging from the chandeliers. They’re sort of running amok in an empty theater,” Cox said.

According to a report in the ​UCLA Quarterly Economic Outlook​, after the pandemic, 2021 is expected to experience record levels of growth with even higher expected growth rates in 2022 and 2023.

In the report, Leo Feler, senior economist of the UCLA forecasting group, said jobs will continue to increase by 3.1 percent and 2.3 percent in the following years. Feler shared his optimistic thoughts on the future of businesses in LA, as a combination of vaccines and changes in regulations have offered new hope.

“We have finally turned the corner,” Feler wrote in the report.

Stronghold owner Mullen said that when the economic rebound happens, NELA residents will flock back to local businesses first.

“I would ask everyone in Northeast LA to really consider trying to give whatever money they’re able to spend to go to small businesses right now,” Mullen said.

NELA residents help each other through record heat wave