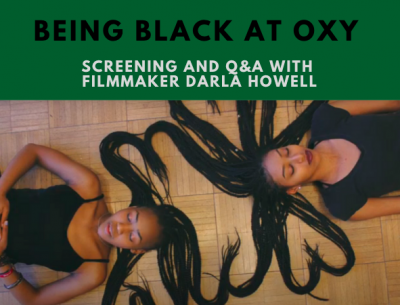 Darla Howell ‘20 celebrated her first film project, a documentary entitled “Being Black At Oxy,” Oct. 8 through a virtual screening at Oxy Arts. According to Howell, the film was made through Oxy Arts’ Initiate Fund and features the experiences of 25 Black students attending Occidental College in the 2019-2020 school year.

While the screening was intended to be in-person in the spring of last year, the event was postponed due to COVID-19. The film features interviews and footage of Black students on campus with sections of a poem written and performed by Howell.

Frankie Fleming, manager of education and community engagement at Oxy Arts, worked closely with Howell to screen the film and throughout her Initiate Grant and said she was amazed at the final product.

“It was a really, really exciting and celebratory moment for the entire team at Oxy Arts,” Fleming said. “We were just incredibly impressed by Darla’s film and what a beautiful job she did, bringing this project to life despite all of the obstacles.”

Howell uploaded the film online to YouTube Sept. 28 and said it gained support online before the Oxy Arts screening.

“A lot of people had seen it before the premiere, which is cool, because I got to send it to my family and my friends and people that couldn’t make it to the screening,” Howell said.

Howell has since begun the Black Arts Fund (BAF) at Occidental which is a grant program that supports the artistic and creative ventures of Black students. Fleming said the BAF has raised over $5,000, exceeding their previous goals. Oxy Arts committed $1,200 to the fund and will work with the Black Students Association (BSA) on the fund’s management and throughout the grant application process.

“Darla’s film and the Black Arts Fund have brought up a conversation about how Oxy as an institution can support Black artists,” Fleming said. “In my mind, I think the film was a really important kind of grounding and jumping off point for a lot of these conversations.”

Howell said she had the idea for her film in her sophomore year when she wanted to document her friends’ as well as her own academic experiences. When she heard about the Initiate Grant from Oxy Arts, she decided to pursue the project.

Howell partially attributed the online support for her film and the BAF to social media and the recent growth in online social activism and anti-racism efforts. Howell said students reposting her film on their Instagram story led to more schoolwide attention.

“When I started the documentary, there wasn’t so much activism surrounding Black Lives Matter. George Floyd was still alive,” Howell said. “This sort of recent increase in activism that we’re seeing on social media, I think definitely helped contribute to the Black Arts Fund and I think people are, I don’t know if it’s like a bad thing or not, because I think people try to prove how woke they are through social media activism.”

Howell said she received responses from Black people and people of color on college campuses who experienced similar feelings of isolation.

“In terms of the experiences that students face, I realize there’s not just one way to be Black. It was a difficult thing to even make the documentary because what does that even mean: being Black at Oxy? Like being a person?” Howell said.

The first shot of the film features the fact that in the 2019-2020 academic year, Black students made up 7.2 percent of the student population. In the film, Tyler Webb ‘20 said that diversity at Occidental was relative, but he still feels like there should be more students who look like him.

“It’s one of the most diverse small liberal arts colleges. That’s a separate category,” Webb said in the film. “There’s always a sense of ‘I’m not supposed to be here on this campus.’”

Satya Sheftel-Gomes (sophomore) was also featured in the film and said she wishes she saw honest representations of the Black community at Occidental, like those presented in Howell’s film, during the admissions process.

“I was very surprised at the lack of Black life there was on campus and it was something that I feel was really hidden and covered up during the application process,” Sheftel-Gomes said. “I feel like seeing these kinds of things, like Black representations of the school, honest representations of us holding the school accountable is really important for incoming students to know.”

Sheftel-Gomes also said in order for the college to support its Black students, it must provide more funding to BSA, echoing several points made in Howell’s film. Currently, Sheftel-Gomes attends BSA’s weekly meetings over Zoom.

“I think we just need more funding and more support from our administration,” Sheftel-Gomes said. “I just know that a lot of the board has really struggled to keep up with the events and to get the same fervor that it has had in past years.”

Isaiah Thomas, assistant dean of students and director of Residential Education & Housing Services, attended the virtual screening and said he empathized with the students’ thoughts.

“As a Black administrator, I felt like I wanted to give a hug to each and every Black student featured in the documentary and tell them that I want to make things better,” Thomas said via email.

Robin Craggs, executive director of International Programs, attended the screening as well and said she believes this documentary is a way in which the administration and faculty can listen to students to see what’s working and what is not in order to best support their needs.

“We have to ask ourselves these hard questions in the way we run our classrooms, organize our majors, recruit students for our programs and help students fulfill their goals and dreams at Oxy,” Craggs said.

“The Intercultural Community Center, together with other key offices within the Division of Student Affairs, are leading an effort to design and implement a Black Action Plan that actively focuses on our Black students and their welfare on our campus,” Elam wrote via email. “At the core of this plan is a concern for the health and wellness of our Black students, their sense of belonging at the College, and developing and forging connections with people and programs that provide support and empower our Black student community.”

Elam said the BAP follows the national Black Lives Matter movement as well as the passing of two Occidental students and members of the Black student community, Ilah Richardson and Jaden Burris. Howell’s film was dedicated to both Richardson and Burris and hopes there will be more mental health resources for Black students on campus.

“We lost two members of our community last semester, so it was very difficult for all of us at a school with, you know, 7.2 percent of the population being Black. How do we lose two students?” Howell said. “I think that’s something that we need to heal from, and we need to grapple with and we need to understand. There needs to be better resources in place for students that are struggling and dealing with really difficult things.”

Howell said someone at the documentary screening asked her if she thought Elam’s hiring was a performative action and if she believed he reflects real change at the college.

Howell said she is still giving Elam a chance to show his support for Black students and is hopeful for more Black representation in higher education. Thomas said he was excited about the BAP and believes it can help Occidental’s Black community.

“I am enthused about the Black Action Plan as a method to uplift the needs of the Black community and make their experience better,” Thomas said via email.

Howell said she is looking forward to the projects funded through the BAF after being inspired by her own circle of talented friends.

“I love the idea of helping Black students and make money to do art. Art has been such an important part of my time at Oxy. I’m really hoping to see some amazing things,” Howell said. “My goal is that the projects can be used to say something true about the human condition, or it can be used to help others in a sense. I like the idea of art being a tool for healing.”

Sheftel-Gomes said it is important that Black artists receive funding through the BAF, especially given the wide range of creativity and interests among Black students.

“I think art is such a great expression for everyone, specifically for the Black community,” Sheftel-Gomes said. “It’s particularly effective. They need to navigate and process the Black experience in places where it can sometimes feel like we’re detached from our identity.”

Black students can apply for the BAF online and applications are due Oct. 30. Five students’ creative projects will be accepted in the fall where they each will receive $1,000 in funding. Their work will be presented in Spring 2021.