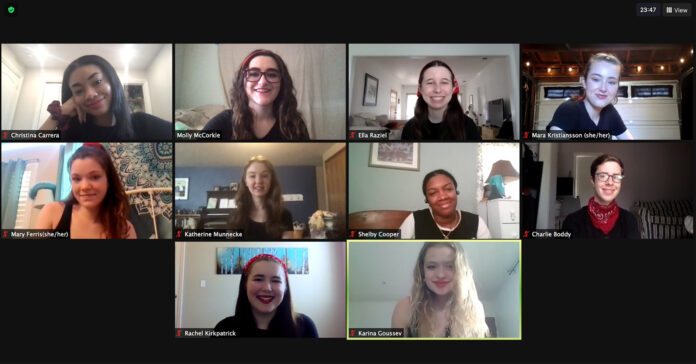 Occidental College’s Dance Production will host its annual performances 6 p.m. PDT April 16 and noon PDT April 17 via the streaming platform Promotix, according to co-president Jillian Kuo (senior). Kuo said performing and practicing virtually has created new challenges while also providing opportunities for innovation. She also said the tight-knit and supportive community that makes Dance Production both fun and popular has remained the same.

Dance Production is the largest student-led organization at Occidental and has been active for 73 years. With their strong legacy and popularity in recent years, co-secretary and choreographer Lucy Smith (junior) said it was important for the executive board to continue hosting practices virtually to provide a sense of normalcy to its club members.

According to Student Leadership, Involvement and Community Engagement director Marcus Rodriguez, Dance Production is one of the most active clubs on campus and has been resilient during the abnormal conditions of COVID-19.

“Dance Pro has been both creative and innovative in their recruitment efforts and member development,” Rodriguez said. “They have met the challenges of remote participation, choreography and arrangement and, most importantly, community and team building. It is truly incredible to see it all come together and I could not be more excited for their show.”

Almost 100 dancers performing in a total of 10 dances will participate in the hour and a half long show, according to Kuo. This is a smaller group than previous years, but Kuo said the club has been able to maintain the diversity of dance styles and engagement across class years.

The virtual performances will be pre-recorded, Kuo said, which means they are able to include more visual effects, backgrounds and sounds compared to the in-person performances. According to co-president Molly McCorkle (senior), the executive board hired video editors to help turn the choreographer’s visions into a reality.

“We have given the choreographers the liberty to do as many creative things as they want with their dances and how they want them to appear on the screen,” McCorkle said.

According to McCorkle, the virtual environment has benefited Dance Production in a unique way.

“Planning ahead for the different possible outcomes of being virtual, hybrid or even in-person I think allowed us to be innovative and creative,” McCorkle said. “It also has challenged us in a positive way to maintain the Dance Production atmosphere.”

Kuo said the dance styles for this year’s performance include hip hop, Argentinian folklore fusion, tap — which Smith is choreographing — and a Broadway dance. Senior Rachel Kirkpatrick said she has danced in the Broadway dance every year with the exception of studying abroad her junior year.

Kirkpatrick said she sometimes felt fatigued from the amount of time spent on Zoom and the inability to feed off other people’s energy while dancing in separate spaces, but the dedication of the choreographers and weekly check-ins before practice made the experience enjoyable. Smith said she was intentional about making practices not stressful and focused on building community with time reserved for conversation.

“Trying to keep it as a space where we can just kind of relax,” Smith said. “Relax but also exercise.”

According to Smith and Kirkpatrick, the logistics of demonstrating and following the dance steps were more difficult virtually, especially with the limitations of practicing at home. Smith said that leading practice sometimes required her to put her computer at her feet so her dancers could see the tap moves. She said this made it hard to watch the dancers and give them feedback.

“A lot of the time I will turn around so people can follow from behind us because it’s easier to see that way,” Smith said. “But then you can’t really see the [dancers], so you don’t really know what’s going on.”

“Most of my life I belonged to a studio that had a similar mentality to Dance Pro, which is dance is for everyone and it wasn’t competitive, so I was looking to replicate that experience in college,” Park-Pearson said. “The student choreographers for Dance Production and the executive board have been really great about trying to replicate the in-person experience.”

The inclusivity of Dance Production is especially important, according to Kuo, because similar types of carefree activities become harder to find as you grow up.

“As you get older, especially in America, things tend to get really competitive and you feel like you have to be the best of the best,” Kuo said. “Dance Production is kind of a really nice space where you can be at any point in your dance career, or not even have a dance career, but you can still join.”

Both Kirkpatrick and Kuo said as they have reflected on their time at Occidental as seniors, Dance Production stands out as a highlight of their college experience and they would recommend it to everyone.

Kuo said her favorite memory from her four years being involved in Dance Production is watching the performances from the wings of the stage.

“Watching people light up on stage and, I always say this, but you know it honestly doesn’t matter what is going on onstage in terms of movement, literally people could be out there just pumping their fists,” Kuo said. “The energy would still be there.”

Tickets can be ordered here. If you are a department that would like to order tickets in bulk, contact dancepro@oxy.edu.

The case for cassettes: ‘I like to be physically attached to my history’

The excitement of language learning and a ‘collective learning experience’