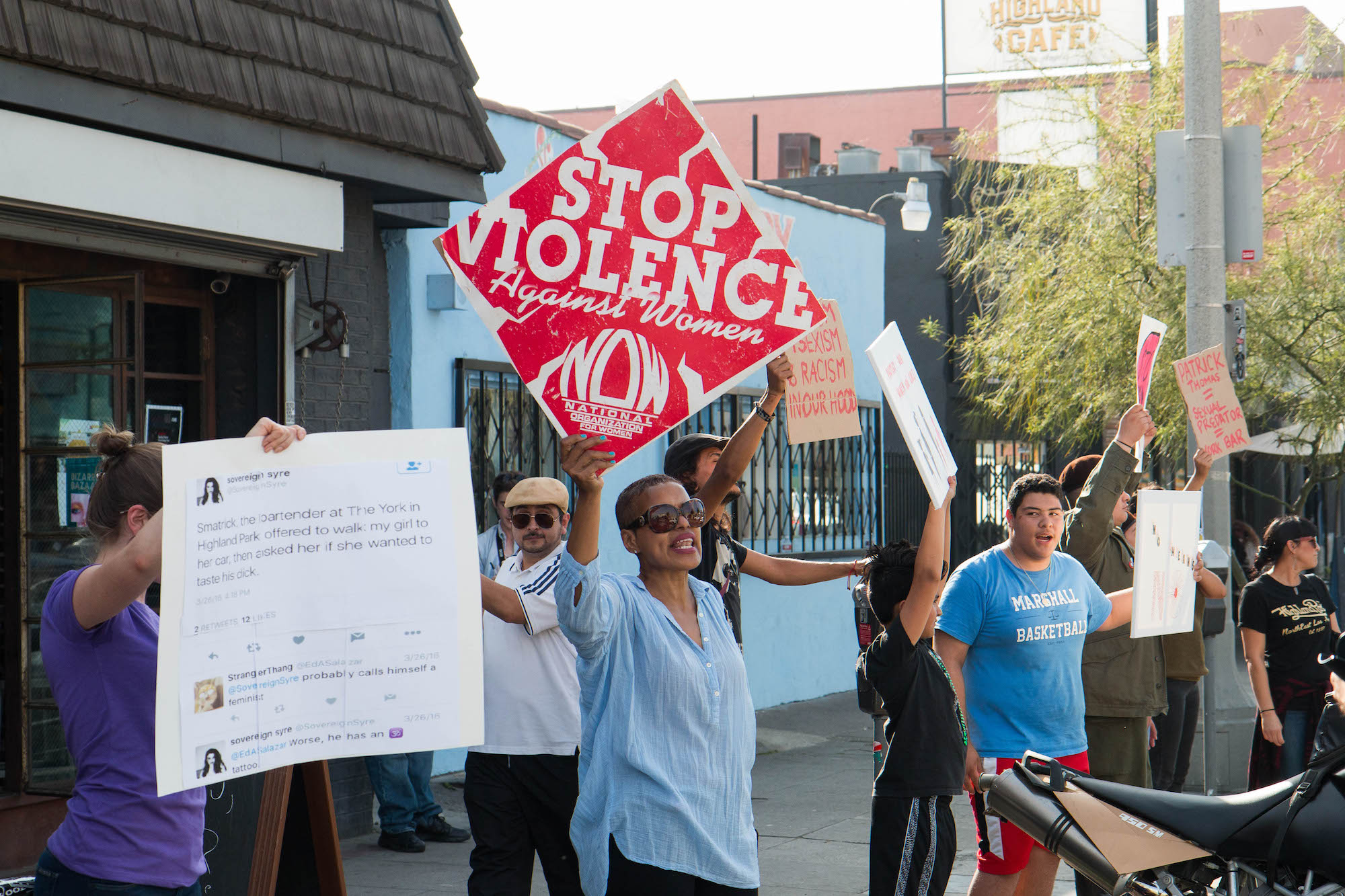 As a wave of new development began in Highland Park 10 years ago, a small business opened its doors — The York on York, a gastropub frequented by Occidental students. Founders Gabriel Byer and Ryan Ballinger designed The York to be a communal neighborhood space. The York’s place in the community has been put into question by Brenda Perez, a former bartender of nine years. Perez filed a civil lawsuit in late 2015 accusing the bar, among other things, of violating the California Fair Employment and Housing Act (FEHA) for sexual and racial harassment, wrongfully terminating her employment, violating California wage and hour regulations, sexual battery, and defamation. Case details can be found online using case number BC604740. Perez’s complaints of harassment and assault are directed specifically at the former bartender, Patrick Thomas, also known as Patrick Duniven. Thomas, who has worked at the York since its opening, recently resigned from the bar.

Brenda Perez (left), who has filed the lawsuit against the York, speaks to protesters.

Brenda Perez (left), who has filed the lawsuit against the York, speaks to protesters.

Perez led a protest against The York in front of the bar on Saturday, March 18. The trial date is currently set for May 2. Legal counsel for both the plaintiff and the defendants declined to comment.

Perez began working as a part-time bartender at The York when it opened in 2007. Before that, she worked as a bar manager at La Serenata De Garibaldi in Santa Monica for four years. She was looking for another job because of the long commute, and to prepare for graduate school. When she walked into The York, she was greeted by former co-owner Byer, who she said interviewed her on the spot. Perez said that as a Mexican-American born and raised in Highland Park, she was representative of the community.

“When [Byer] hired me, he specifically said, ‘I need you to be here, I need you to be in front,’” Perez said. “Gabriel told me, ‘I need people to understand that they’re welcome here, that you are from this community,’ to show the community his vision of inclusion.”

The York bar, located on York boulevard in Highland Park, just blocks away from Occidental College.

Byer died in a motorcycle crash in 2008, just 10 months after opening The York. Perez allegedly started to experience a more hostile work environment around the same time. She explained that Byer’s aspirations for The York — to create a community space — motivated her to continue working at the bar.

“[Byer] embraced our culture, our community,” Perez said. “His vision was to include everybody. That’s why I never left, because this is Gabriel’s baby.”

“When The York opened, it drew people from every walk of life,” Puglisi said. “It was very eclectic, and it worked. Gabriel’s vision was amazing.”

For Perez, the purpose of going to court is to protect future female patrons and employees of The York from sexual harassment. Perez said she has suffered long-term physical and psychological stress-related ailments and does not want to see other women in her position.

“More than money, more than winning, it’s about not letting this happen to other women,” Perez said. “We have to be the voice for women who don’t have a voice.”

Members of the Highland Park community stand in protest of The York on York Blvd on March 18th, 2017.

Members of the Highland Park community stand in protest of The York on York Blvd on March 18th, 2017.

Thomas denies all of Perez’s allegations. In the past few weeks, he reported that customers frequently asked him about the lawsuit while he worked, but he cannot comment without his attorney present. He said he has become a distraction to customers and to the business — which is why he resigned.

“I’ve had to resign from a job that I worked for 10 years, that I basically grew up at,” Thomas said. “The York is a place that I love … I care about that place too much, and the people that work there.”

Thomas was 21 years old when he began working at The York. He started as a barback the year the bar opened. He rose to a management position before resigning.

Ballinger, The current owner of The York, also denies Perez’s allegations. He spoke on behalf of the management staff and said that they look forward to going to trial because they expect to prove that the accusations are false. Ballinger would not comment on Perez’s 2015 termination.

One protester holds up a sign directed at bartender and defendant Patrick Thomas.

Bartending and managing bars in Massachusetts after graduate school, Ballinger has a long history in the restaurant industry. His friend Byer pitched the idea of replacing the establishment known as The Wild Hare with The York, originally planning for just a beer and wine bar.

“The Great Good Place” by Ray Oldenburg, a book kept in The York’s back office, wass a main source of inspiration for The York. Ballinger spoke on the book’s guidance in creating spaces where people can relax, see friends and neighbors and enjoy themselves.

“I think of British pubs, German beer halls, Parisian cafes, whatever place has people come together, and that was big for us,” Ballinger said.

In order to integrate with the Highland Park community, the bar has donated to local schools and organizations throughout its existence. Ballinger said they have donated to a Youth Literacy program at Buchanan Elementary and subsidized music teachers’ salaries at Yorkdale Elementary. Perez confirmed that she helped organize a fundraiser for AIDS Project LA at the bar, in 2012.

Ballinger said that the expensive legal fees required for managing Perez’s lawsuit significantly reduced the amount of charitable donations the bar made in the past year.

Ballinger also said that the pending lawsuit restricts his ability to comment extensively on Perez’s allegations and the details of her employment at The York. His official statement denies all of her accusations.

Major elements of Perez’s complaint revolve around what she refers to as “Oxy Night,” which she said has taken place most Thursday nights since 2013. According to Perez, Thomas created “Oxy Night” in order to attract female students to the bar.

Perez questioned the intentions behind “Oxy Night” because The York rarely hosted themed nights, and that the bartenders generally complained aboutOccidental students because they don’t tip well, if at all. She also said that Thomas forced her to clock out earlier than scheduled, usually at 8:30 p.m., even if the bar was busy.

The Weekly was unable to confirm these allegations with other female bartenders who worked the same shift. One former Occidental student who worked at The York reported having an overall positive experience working at the bar.

Ballinger and Thomas both said that there were never drink specials for Occidental students at the bar or any form of “Oxy Night.” According to both, the trend of students flocking to Highland Park hotspots Thursday nights evolved independently.

“We love that Oxy students come here,” Thomas said. “Everyone at the bar tries to make a safe environment for them.”

One Occidental senior no longer goes to The York, but when she did, she said she usually received free drinks from Thomas, including Thursday nights. She described Thomas as consistent and flirtatious, saying that he asked for her phone number on most of her visits and that some of her friends had similar experiences. Two other Occidental students interviewed said they have had personal interactions with Thomas outside of the bar.

Ryan Ballinger, co-founder and manager of the York bar, looks on as people protest outside.

This lawsuit is not Perez’s first experience with sexual harassment. Perez said she was sexually assaulted for the first time in her senior year at California State University, Northridge. She only spoke about the event to one friend, and eventually started seeing a therapist.

“It was extremely difficult for me because I didn’t tell anybody,” Perez said. “You feel like you’re half dead.”

Years later, she said she settled a sexual harassment case with a employer of nine years.

While studying at Pepperdine University for her master’s degree in clinical psychology, Perez heard her professor speak publicly about her own sexual assault. This inspired Perez to speak about her experiences for the first time.

“The minute that I said it, it lifted out of me,” Perez said. “Once you liberate it, the shame and the guilt is gone, which makes it a lot easier to talk about.”

The experience changed her professional aspirations. She began working in the Trauma and Culture Research Lab at Pepperdine, speaking about her assault and training psychology professionals about the intersection of Latinas and trauma. Perez’s employment at The York ended three weeks before she intended to begin studying for her PhD in clinical psychology at Pepperdine.

In 2015, Perez hired workplace specialist attorney, Nancy Abrolat. A year later, in late 2016, Perez hired Jan Tucker, a private investigator and sexual assault expert witness to help bolster her case. He is the co-president of the San Fernando Valley/Northeast LA Chapter of the National Organization for Women. This week Perez changed attorneys, employing J.J. Little and Associates, another firm specializing in employment law. This may delay the trial date.

Tucker hopes to expand this lawsuit into a class-action case that would incorporate sexual misconduct claims by other women. So far, one woman has expressed interest, but she has not submitted a formal statement.

Until both parties meet in court, Ballinger encourages members of the community to make their own decisions about The York and to pay attention to the outcome of the May 2 jury trial. He acknowledged that The York cannot publically defend itself until after the trial, but that if people want to boycott the bar until then, they should be free to do so.

“I don’t purport to tell people where to spend their money,” Ballinger said. “Come in. Look at us. Let us serve you, that’s what we’re here for. I don’t know if there’s a better way to prove ourselves than just by being open.”

Former York patrons, Puglisi and Cornejo, the friends Perez made while working at The York, have no intention of returning to the bar.

“[Perez] was the reason we went,” Puglisi said. “She is an amazing bartender, she exceeded everyone’s expectations. Before my glass ever got empty, she was on it.”

Cornejo has lived in Highland Park since she was 5, and Puglisi moved from the San Fernando Valley 12 years ago. They regularly patronize their favorite establishments in the area, such as Villa Sombrero, as often as once a week.

For Occidental students, the issue might be slightly more convoluted. Controversy concerning claims of queerphobia at The York perpetuated by the bar’s bouncers initiated important discussions about party culture and queer inclusion on campus. According to Ballinger, patronage has for the most part, remained unchanged.