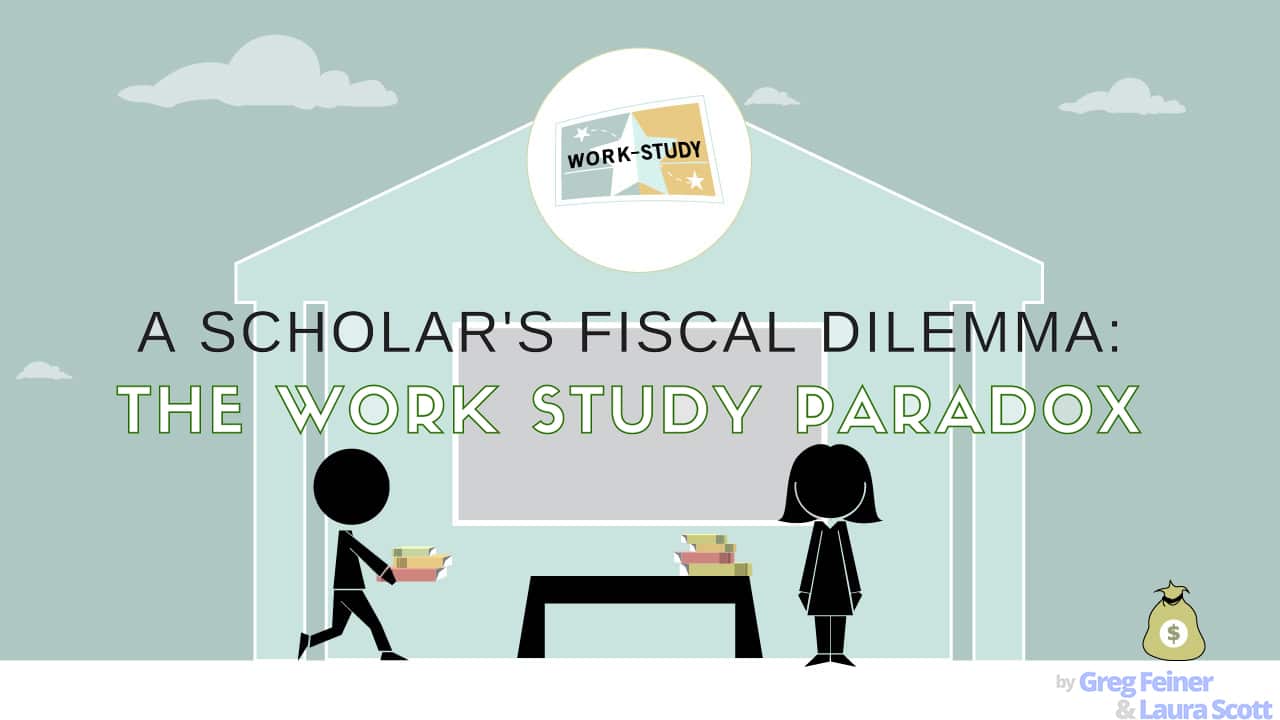 In the traditional sense, Federal Work Study (FWS) is the most American form of financial aid. The idea behind the program, started in 1964, was to reward the principle of hard work, and exemplifies a “pull yourself up by your bootstraps” mentality. FWS, which allows students to work in close proximity to their academic environment or even directly within their academic interests, aspires to benefit both the institution and the student. It has more flexibility than other forms of financial aid as well since it does not directly imply that a secured amount will be deducted from student account bills.

“You get paid, and then at that point, we don’t track how you spend the money,” Emily Valk, the financial aid counselor at Occidental College, said. “You can spend [your paycheck] however you want.”

According to Talent Acquisition Manager Ida Buffone, finding a job on campus is the responsibility of students, but if a student wants to work, then there are plenty of job opportunities available.

“There are some students who bypass the work award the first semester just because they want to get acclimated to the college,” Human Resources Staffing Specialist Linda Escobar said. “So, it is there, but it’s not required for that student to take advantage of it. And on the other side of the coin, there is an effort by the student that must be shown.”

Work study is not entirely an aid program. The maximum work study award is $3,100 per year. However, if a student worker begins their job in early September and works the maximum of 15 hours a week for 12 weeks until finals, then they will make only $2,100 of their award that semester. This leaves the student and/or their family on the hook for that remaining $1,000.

“I know that most students don’t earn their maximum,” Gina Becerril, director of financial aid, said. “There are a good chunk of students that do, but the majority don’t.”

The Free Application for Federal Student Aid (FAFSA) determines eligibility for work study. As it is a federally sponsored program, FWS is not funded entirely by the federal government. The Department of Education’s website states that institutions must pay up to 50 percent share of students’ wages.

Becerril said that the federal government funds only 8.5 percent of Occidental students’ work study wages. The college funds the remaining 91.5 percent from its operating budget.

“There was a review about the work study program and for the size of Occidental college, we were one of the top colleges and universities in the U.S. to provide jobs to Occidental students,” Becerril said.

Becerril said via email that there are currently 1,200 student workers on campus. All 1,200 — whether or not they receive work study — can earn a maximum of $3,100 per year. According to Becerril, this earnings cap applies to all students. There are no financial incentives for employers to hire non-work-study students over those on work study.

The Occidental College Human Resources Department lists departments that do not require a work award for student employment on their website: Academic Mastery Program (AMP), Admissions, all teaching assistants (TAs) and Research Assistants, Associated Students of Occidental College (ASOC), Disability Services, Information Technology Services, Language Lab, Media Services, Neighborhood Partnership Program, Telefund, the Tiger Cooler, Coffee Cart and The Green Bean. However, some of these departments, like the Tiger Cooler, do give priority to work study students when hiring workers.

One might say that if students want to earn their maximum work award, they should work the maximum number of hours they can but since student-workers are just that, students, finding the time can be a challenge. More time spent working their jobs is less time spent studying, putting student workers at a further academic disadvantage than their non-work study peers.

“They say the maximum to work is 15 hours per week and with that I would be able to fulfill [the maximum award], but I’m taking 22 units including this job and two other jobs,” Juliah Lee (junior) said. “Those two jobs only work because they’re outside of the office [hours of] 9 a.m. to 5 p.m. With the seven to eight hours I can fit in, it’s only going to get me $2,000 out of $3,100.”

Lee works in the Corporate and Foundation Relations Department writing contact letters and grant proposals. She also works as a debate coach in La Crescenta and as a babysitter off-campus.

Though $3,100 a year might not make much of a dent in the $67,806 it costs for a year’s tuition, housing and meal plan, it can go a long way toward covering everyday expenses. These might include groceries for students who don’t have a meal plan or basic toiletries.

“It’s just kind of a struggle, you know,” Ariadne Makridakis (sophomore) said. “I’m pretty financially independent. I don’t really depend on my family to pay for stuff. My financial aid is good, but I still have to pay for off-campus food or personal necessities.”

Makridakis worked on campus from October of last year through the summer, but she was not able to return to her work study job this year due to cost constraints. In addition to her full course load, Makridakis currently works as an editor for the Critical Theory and Social Justice (CTSJ) Journal of Undergraduate research, where she makes about $40 a week. She also works an off-campus job at Marshalls in Glendale, upon which she now relies for her personal expenses.

While she says she harbors no ill will about her situation, Makridakis said that she does miss having an on-campus job, partly for its flexibility.

“When I had my on-campus job, I could pretty much decide my schedule,” she said. “If I needed time off and asked them, ‘Hey, I have a lot of work this week, can I lessen my hours this week?’ they’d be pretty lenient with that.”

She also said that though her bosses at Marshalls try to accommodate her student schedule, they still are not as accommodating as an on-campus job would be.

Another benefit of on-campus jobs is that they can provide students with relevant work experience for jobs after college. Asher Tessier (sophomore), for example, is a Media Arts and Culture (MAC) major who works at the library’s Critical Making Studio (CMS) as a member of the video team; he can use all the work that he does for work study in a portfolio when he applies for film-related jobs after college. In addition to his job at the CMS, he also works around three hours a week at the Cooler.

“The CMS is very integrated into Oxy culture,” Tessier said. “I’m doing events that Oxy’s putting on, and I get to go to talks … Plus, I get to help students one-on-one, so interacting with them on that level is a lot nicer than, like, handing them ice cream when they’re high.”

In addition to his personal expenses, Tessier said a lot of his earnings from the CMS and the Cooler go toward student loans.

Tessier pays for his Occidental tuition all by himself and even though he values the experience, Tessier said it can be difficult to make enough money from his job on campus. He said that, due to unpredictable scheduling, it is often difficult to work the hours he needs.

“The hours definitely vary, so sometimes I don’t make what I need to make to live as a person, which is hard,” Tessier said. “But, sometimes I do. So I’ve gotten really good at budgeting.”

Although every department budgets differently, the recent increase in L.A.’s minimum wage has had an effect on students’ hours and a department’s willingness to hire.

Even though the wage for student workers is increasing, the maximum work award will remain the same. This is because work study is a federal program, and so it does not follow L.A.’s minimum wage; it follows the federal minimum wage, which has been $7.25 per hour since 2009.

This has increased the rate at which students exhaust their allotted work study earnings, which means that employers have to hire more employees to work the same number of hours.

“Even though the minimum wage has increased, the earnings limit has not increased,” Robert Starec, associate director of Campus Dining, said. “That means that, after we factor in the number of weeks per semester and that pay rate, it’s a smaller number of hours that each student can work and not risk using up their work award … So even though Human Resources will say that students can work up to a maximum of 15 hours per week, the earnings limit doesn’t support that because of the change in the minimum wage. If we allow somebody to work up to 15 hours a week, they would only make it to about Fall Break.”

Starec oversees operations at the Tiger Cooler and the Coffee Cart. He is also in charge of front-of-house Marketplace staff, which includes cashiers and dishwashers. Starec said that the increase in the minimum wage has made it harder to keep more experienced staff.

“While we’re giving more students the opportunity to work, it’s more of a burden on us to get through the hiring process and train, and they might not necessarily return,” Starec said. “It was much less of a burden to keep trained staff [before the increase].”

For other employers, such as the college bookstore, the minimum wage increase has lead to similar scheduling difficulties. However, bookstore manager Donna Huebner said that this is because she has had to hire fewer workers to stay within budget, creating more vacant shifts to fill.

Because the bookstore is so particularly busy at the beginning of the year, it is particularly difficult to make a schedule that prevents its employees from exhausting their work-study too quickly.