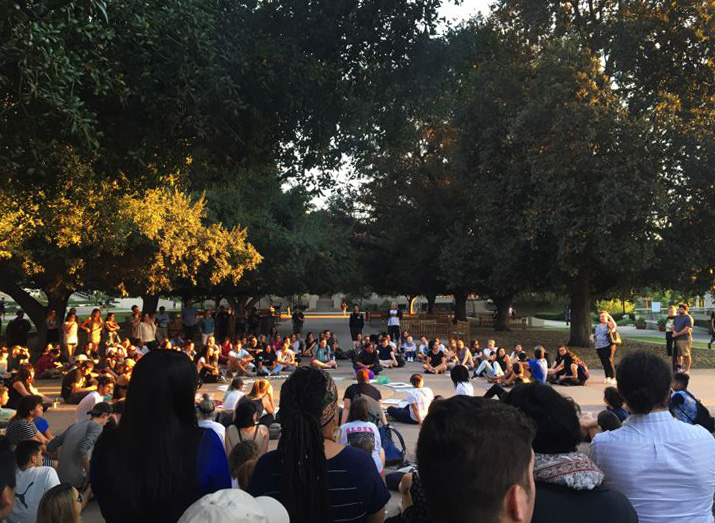 Administration and student gatherings merge to discuss the range of reactions post-election day.

In response to the Nov. 8 election of Donald Trump as President of the United States, President Jonathan Veitch sent an email to the Occidental Community at 3:02 p.m., Nov. 9, encouraging students, faculty and staff to meet in the quad to address their full range of emotions. Before receiving Veitch’s email, two separate groups of students had also previously planned to meet in the quad to address the results of the election. When they joined up, the conversation in the quad quickly turned from the election to students’ concerns with the administration, many of which were brought up last year during the occupation of the Arthur G. Coons administrative building. Veitch was not present at the meeting, as he was out of town.

Krystel Beltran (first year) and Rodina Mohamed (first year) sent out a Facebook event invite to approximately 50 students earlier that day, inviting them to attend a protest in Downtown Los Angeles. Initially, they had planned to meet in the center of the quad at 1:45 p.m. so that they could organize rides but then decided to meet at 4 p.m. after receiving Veitch’s email, according to Raihana Haynes-Venerable (senior).

Another group of students, comprised of mainly first years and sophomores, had also planned on meeting in the quad with signs of protest against the election results before receiving Veitch’s email, according to Isa Kibira (junior). They began sitting in the quad at around 3 p.m., discussing concerns about a Trump presidency among themselves.

When Chief Diversity Officer Rhonda Brown arrived at the quad accompanied by other members of faculty and staff at around 4 p.m., she felt that they may have been encroaching on students’ space. Brown wanted to be mindful of the students’ ability to organize separately so she asked Isa Kibira (junior) for clarification.

Kibira — with Interim Vice President for Academic Affairs and Dean of the College Kerry Thompson by his side — asked the crowd if the students wanted to make two separate circles or join together as students, faculty, staff and administration.

After receiving the green light, Thompson walked over to the center of the quad and knelt down among the students, providing words of consolation.

The crowd grew to a few hundred people, spanning the quad. The conversation rapidly turned to students’ concerns with the administration. One student proposed that the Marketplace offer more cultural foods, such as more Mexican food instead of just organic foods. Another student — standing up and raising her voice — said that it is not enough for the administration to say they are committed to ensuring that students feel supported, citing her own difficulty concentrating in classes when she is worried her mother will be deported. Another student brought up the lack of attention the Haines vandalism of gender-neutral bathrooms received in comparison to the excessive attention the 9/11 memorial incident garnered.

“Where were these conversations when the Haines vandalism occurred?” Ginny Wyatt (sophomore) said.

According to Brown, there had been extensive conversations surrounding the vandalism of Haines as well as a formal investigation.

Thompson assured students that the administration was addressing their concerns. Despite Thompson’s attempts to quell the escalating tension, some students did not think his responses were adequate.

“We were actually here a year ago doing exactly the same thing. And nothing has changed because you weren’t there for us. So don’t give me that,” Haynes-Venerable said, referring to last year’s protests.

Other faculty began to speak up. Studio Art and Art History Professor Linda Lyke, who teaches printmaking, said she had spent that afternoon helping students create art in protest. Associate Director of Student Wellness Services and Director of Psychological Services Matthew Calkins encouraged students to reach out. Rev. Dr. Susan Young from the Office of Religious and Spiritual Life offered her services as a confidential resource. Assistant Director of the Office of Student Life and New Student Programs and Leadership Development Amy Hill tearfully vocalized her commitment to students’ needs.

“I’m so wrecked by what happened yesterday. I don’t have any meetings tomorrow and I have a dog that’s asleep on my purse,” Hill said. “Come find me, come talk to me … I’m sorry you feel failed by this college and by this country.”

Tony Romero (sophomore) responded by demanding increased proactivity from the administration before moments of crisis. Romero explained that Occidental is a microcosm for the nation.

“This is where community matters,” Romero said.

Still kneeling, Thompson closed out his contributions by extending his support to students that feel angry.

“If you don’t know me, get to know me because I’m not bullshit,” Thompson said. “Let’s not tear each other apart like they want us to.”

Haynes-Venerable responded to Thompson directly, saying she found the space and conversation unproductive.

“I’m just getting a lot of platitudes from you right now,” Haynes-Venerable said. “I’m going to City Hall tonight. Fill your cars.”