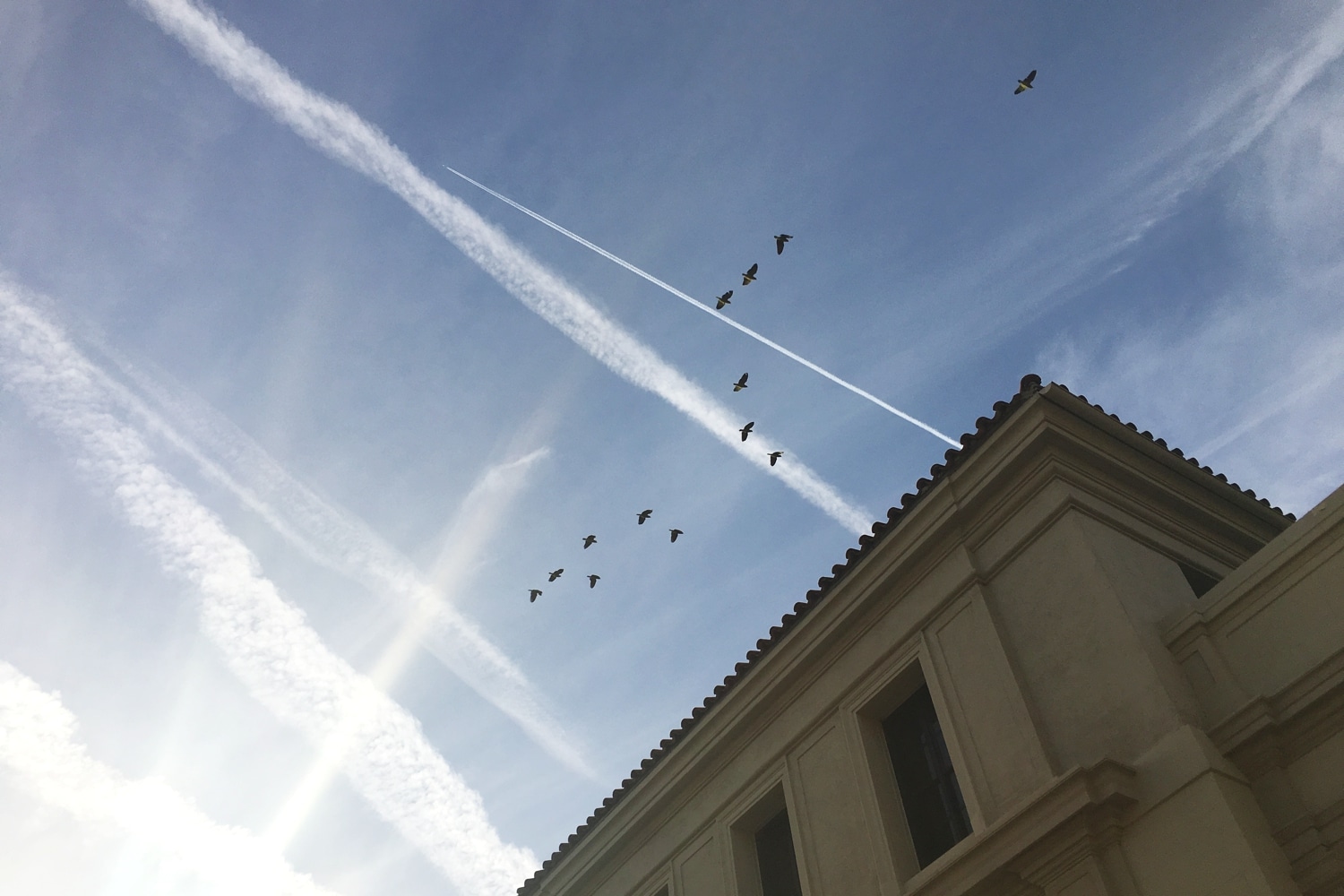 As sunset nears, the sound of screeching green parrots flying over campus frequently halts students in their tracks, leaving many to wonder why this daily phenomenon occurs. According to professor of biology John McCormack of the Moore Lab of Zoology, the parrots screech and circle because they are beginning to settle in for the night ahead.

“They are congregating in a big group and looking for and settling down in a roosting site for the night,” McCormack said. “So what they’re trying to find is like a big nice tree that they can all group together in and then go to bed.”

Professor James Maley, who also researches biology in the Moore Lab, said that one common roosting site is situated in a large tree in Altadena, just over four miles away from campus.

“The closest roost is [on] the corner of Washington and Fair Oaks in Altadena, or North Pasadena, and they congregate there in the thousands,” Maley said. “In the morning, they break up and travel all over Los Angeles and feed in small groups, and as it starts to get to late afternoon, they start gathering up in bigger flocks with each other and fly to their roost.”

“They’re actually both endangered species in Mexico,” McCormack said. “But they have become established here just because people have released them as pets.”

According to a paper published in 1973 by former Moore Lab Curator John William Hardy, observers consistently spotted only one pair of parrots in the area throughout a bird documentation process. The paper states that two red-crowned parrot adults were observed in North Pasadena in 1963.

According to McCormack, although there were many theories on how the birds came to Los Angeles, including myths about a pet store burning down and a bird smuggler getting caught and releasing them in the valley, there were likely a number of factors that contributed to the significant bird population.

“You know, some of these things might be true, but probably wasn’t completely responsible for the parrots we have now,” McCormack said. “Small groups of them started banding together, and then if one got released it would sort of join the flock and eventually they managed to breed successfully, and now they’ve got a self-sustaining flock.”

According to McCormack, the impact of the introduction of these two birds on the local environment is difficult to measure, as there is no documented evidence of the parrots taking away food resources from native birds. The urban environment also makes this impact challenging to assess, according to Rowdy Freeland (junior), one of the students working alongside McCormack and Maley in the Moore Lab.

“Something that I think is really interesting is how they have adapted to living in the city,” Freeland said. “They feed on the numerous fruit trees that people plant in yards, medians, parks and gardens. Since these trees are not native, parrots aren’t really competing with native species for food resources which also makes them low-impact as far as non-native species go.”

For the past couple years, McCormack and Maley have started working alongside students such as Freeland on a project to determine whether or not hybridization between the two species has taken place. They are conducting this research in order to determine the possibility of sending some of the abundance of parrots in Los Angeles to Mexico to replenish the dwindling populations there. Since the red-crowned parrot is native to Eastern Mexico and the lilac-crowned parrot is native to Western Mexico, they must be cautious not to introduce a new species of birds to those environments, according to Maley.

“There’s more red-crowned parrots in Los Angeles than there are left in the wild, and so the idea is maybe we can use these birds to like replenish their native range, but we don’t want to bring hybrids, that would be really bad to release hybrids into their native range because it’s introducing bad genetic effects on them,” Maley said.

According to McCormack, one of the benefits of studying the parrots at Occidental is that the Moore Lab of Zoology has a vast variety of bird specimens, including parrots of both species from before and after they came to Los Angeles. This resource will prove to be very useful in comparing the DNA genomes between the species. According to Maley, while DNA results are necessary in confirming whether hybridization has taken place, they have already observed visual signs of it.

“Based on the photographing of the birds that are on campus combined with the specimens we’ve got, it does seem that there is quite a bit of hybridization going on,” Maley said. “It’s not clear to what degree yet, because there’s a lot of variability within species and so it’s hard to know what’s just a variable like weird red-crowned or what’s like a red-crowned lilac-crowned hybrid. That’s where we’re going to get the DNA for.”

According to Margaret Schedl (senior), another student involved in the parrot hybridization project, the interactions between the two species on campus is one of the most interesting aspects of the research.

“It would be interesting to find out if these parrots are potentially hybridizing because they’re different species whether they’re lilac-crowned or red-crowned, they all fly in flocks together,” Schedl said. “That’s just super interesting to me, we see them all the time but sometimes we don’t stop and appreciate them.”

One of the aspects that makes working on this particular project enjoyable is the students’ general interest in the parrots, according to McCormack.

“We get lots of inquiries, lots of people are curious about the parrots and it’s incredible,” McCormack said. “It’s cool because you know to work on a project of an organism that people are really focused on is kind of interesting. I think people will be interested in the results that we find.”