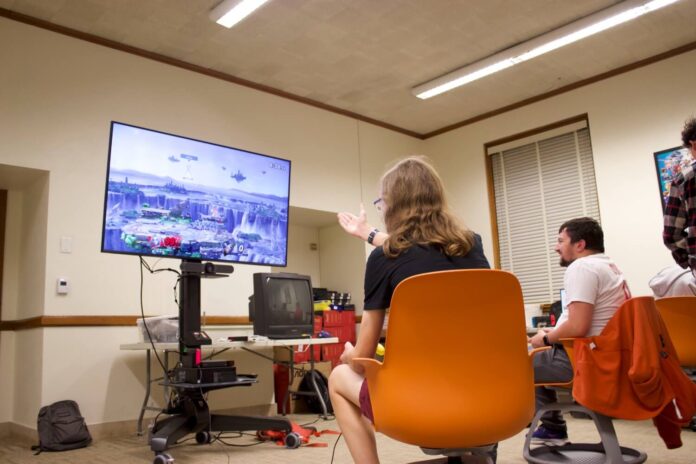 Amidst the endless clacking away at keyboards and nonstop studying that take place in the Academic Commons, lie hidden numerous fantasy worlds, bloody battlefields and elaborate racetracks. Trek up four short flights of stairs, and students can find all this and more in room 364 of the library: Occidental’s gaming room. What once was a space to store special archives is now host to computers, monitors, headsets, keyboards, Nintendo Switches and over 500 video games.

Sevrin Weed (junior), president of Oxy Gaming, said that the resources and equipment in the gaming room are available to any student on campus — club member or not — who just wants to come in and play video games. Weed said that Oxy Gaming was originally named Oxy Gaming Guild, but dropped “Guild” from its name to emphasize that their club is open to all skill levels and experiences — from competitive gamers to casual players to those who have never touched a game console in their life.

“Everybody likes to compete in some way in gaming, but I don’t want to really restrict what that looks like. Maybe they’re competing against themselves, maybe they’re competing against their own ambitions and achievements. Maybe they don’t want to compete, and they want to just be able to relax or escape,” Weed said. “Whatever it is, I really don’t want to be the person to decide that. I want [the gaming room] to be a place where people can go and just have a good time and enjoy games.”

Oxy Gaming was first formed in the fall of 2019, with an email from Tzu Kit Chan (senior) to the student body polling for interest in a Choi Auditorium watch party of The International 2019 (TI9), a worldwide championship tournament of Dota 2. The following year, Oxy Gaming found a boost in attention and membership during the pandemic, according to Weed. In a time when many clubs had a hard time meeting and staying active, Oxy Gaming received an increase in interest, just like the gaming industry at large. Weed said the club now has 154 members in their Discord and eight active e-board members. 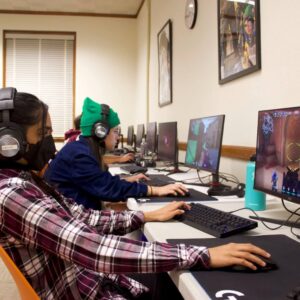 Although Oxy Gaming is capable of holding online activities, as they did during the pandemic, Lee Chico (senior), social media manager of Oxy Gaming, said that one of the things he values most in the club is the connections fostered from in-person interactions, despite the online essence of gaming. Chico compares gaming together in person to team bonding in a sport. According to Chico, video games can also influence communication skills — understanding the video game in his head and verbalizing it to another person has helped him connect with others, Chico said.

“We don’t need to be next to each other [to play video games], but we are, and it creates more of an intimate feeling between teammates to understand what’s happening or where we’re coming from,” Chico said. “Video games also allow me to connect with a newer player or an apprenticeship kind of thing. I genuinely really do enjoy helping other people, whether it be video games, or everything else in general.”

According to Weed, Oxy Gaming aims to maintain and build a welcoming community for students who want to meet others who play video games. Chico said the gaming room brings a comforting atmosphere to the Academic Commons.

“I’m hoping that a lot more people do come out and realize that ‘Oh, this isn’t just a roomful of sweaty gamers that are taking the game seriously — you can come by just to chill or talk and whatnot,'” Chico said. “Funnily enough, I feel less inclined to do homework here in the library than I am to go into [the gaming room]. Personally, I’d feel more comfortable hearing people talk, or the computer clicking or the joysticks, or Smash Ultimate. I find it a lot more comfortable.”

Oxy Gaming’s ambitions aren’t confined to campus, or the four-year period most students spend at Occidental. Weed and other e-board members aim to guide students to opportunities in the surrounding area and even to careers in the gaming industry.

“There’s a lot of people who really badly want to work in gaming. It’s very hard to get your foot in the door, it’s very hard to get that opportunity to meet the right people to get a chance,” Weed said. “I think that Occidental College as a college has an enormous opportunity because of its proximity to some of the biggest game developers in the world. Developing and creating a bigger interaction between Oxy and those places has been really important.”

One nearby video game developer based in LA is Riot Games, with its headquarters about a half an hour drive from Occidental’s campus. They have developed video games such as League of Legends and Valorant, games for which Oxy Gaming has formed competitive teams. In Nov. 2021, Riot Games invited the club’s e-board to the Netflix premiere of Arcane, which was held at Riot Games’ headquarters.

Gaming has been proven to be more than just a hobby. The industry provides numerous career opportunities not just for playing video games, but also behind-the-scenes roles such as coding specialists, programmers, graphic designers, sound engineers and many others. For Oxy Gaming’s Discord manager Joshua Pulido (senior), video games provided a path to education, sparking his interest in computer science, his current major.

“Most of the reason I’m in college is because of playing games. I started learning how to program through a very famous game called Minecraft. And so [it is] very interesting that I kind of came to college from playing video games,” Pulido said. “It’s pretty much been not only my passion, but also really propelled [me] to want to pursue that as a career.”

Weed said he also has intentions of pursuing a career in the gaming industry, and already has experienced educational opportunities thanks to gaming. Weed deferred from Occidental for the 2018-19 school year to attend Vefsn Folkehøgskole TOPPEN, a high school in Norway. There, he was able to choose a line — a subject that is studied in depth — and decided to study Esports. Weed said he was also able to try new courses and activities, such as playing in a band, ice climbing, and creating a diss track. The following school year, Weed was invited to work at the school, and returned as a teaching assistant for the Esports class.

Chico said he hopes Oxy Gaming can help shed more light onto other opportunities and careers in the gaming industry.

“Being a player is only one side of the gaming industry,” Chico said. “We can venture further off into other jobs like event planning, or other positions that I don’t even know of. I went to the Riot Games’ League of Legend live match. And it wasn’t only just the players. Rather, there’s analysts, camera people — there’s a lot that you can do in the video game industry but isn’t in the forefront. We don’t necessarily have to always focus on competitive gameplay.”

Despite skill level, experience or interest, Weed hopes more students can give Oxy Gaming a try.

“I like gaming, and I just want to see it grow. I’m very aware that people might feel intimidated and not want to show up. And I’m trying to curb that and just say that if you’ve never played a game in your life, please show up. Because you’re gonna get a chance to just try it out,” Weed said.