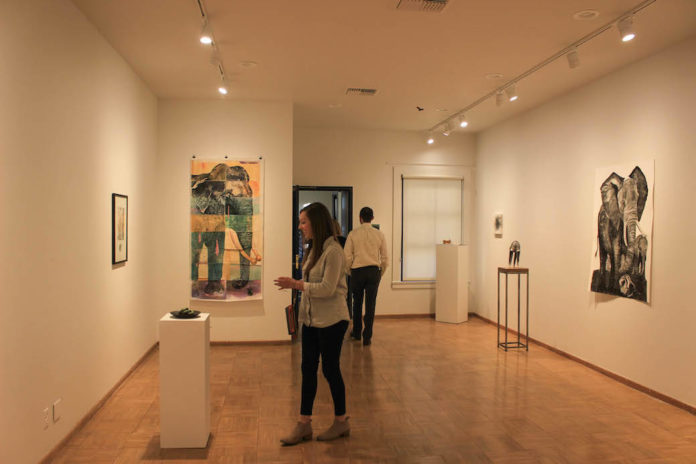 A stoic paper cheetah with gleaming eyes stares out from the Weingart marble fireplace as a neighboring hyena looks on, its usual smile replaced by an emotionless stare. Inside the hearth, screen-printed words including “HUNTED,” “LOST FAUNA” and “RHINO” glow in warm tones of reddish-browns and dirty oranges.

This is only one powerful display among numerous majestic prints, paintings, multi-media artwork and sculptures of Africa’s creatures at the opening reception for “MEGAFAUNA: Endangered in Africa” on April 21. The display, which runs until May 12, features art from selected artists and students from Southern California. It explores the diversity of animal life, particularly the endangered species of East Africa.

“We’re working with students in a way where they can see that they’re professional artists,” Lyke said. “Having professors from other schools come in to show them tricks helps them learn from each other. There’s only three studio art professors at Oxy, so they can see different perspectives.”

Lyke was inspired to put on the show after learning about the Big Life Foundation. Co-founded by photographer Nick Brandt and conservationist Richard Bonham in September 2010, the Big Life Foundation promotes the cause of conservation in East Africa and works with regional communities to save elephants and rhinos. Lyke first conceived of the event two years ago and has been planning the details since her printmaking classes last year.

“Last year in my classes, I was working on the idea. Printmaking has a lot to do with political activity, which is where its roots come from.” Lyke said. “It was serendipity that we had this space to showcase.”

Having been granted access to a gallery, she discussed her plans with professors from other institutions. Lyke encouraged them to approach their students with the idea, who gladly took up the opportunity. In the end, there were two college classes entirely devoted to the show with a few more making smaller contributions to the show.

Members of the local community as well as many Occidental students and faculty came out to enjoy the dynamic showcase and music and free food offered on the patio. Friends and families mingled and sifted through the prints and shirts on sale. These prints ranged from animal and human forms to inked abstractions. Current and former printmaking students hand-printed shirts featuring endangered East African animals that were also on sale. Along with contributions to the Big Life Foundation, some of the proceeds were donated to the LEWA Wildlife Conservancy, which promotes community conservation of wildlife in Kenya specifically.

Among the noise of budding and buzzing conversation between groups of students, faculty and family members and the noise of clicking camera shutters, the art exhibit also attracted the attention of President Jonathan Veitch, who emphasized the value of hosting more art exhibits and related events on campus.

“It’s nice to see student work mingled with artist work,” Veitch said. “We have to beat [these schools] all the time on the athletic field so we might as well do something collaborative with them.”