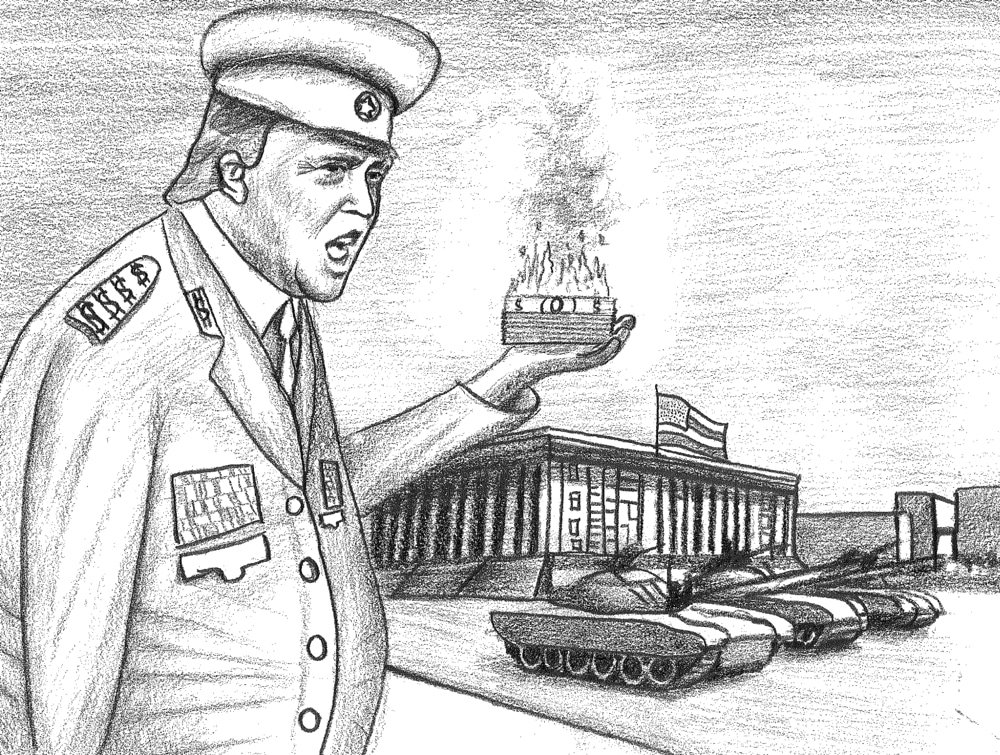 Donald Trump wants a parade. With an approval rating of 40 percent, a special prosecutor reaching deeper and deeper into the White House and the stock market dipping, it’s no surprise that President Trump wants to distract us. However, with budget reports estimating the cost of this presidential boondoggle between 10 and 30 million dollars, it’s a high price for vanity. Typical of our president, the idea for a military parade is both crass and ill-informed. But it’s not just silly, it’s dangerous. Trump is flirting with jingoism, the kind of extreme nationalism that got him elected, using the American military to distract from his many mistakes.

While 30 million dollars is not a lot of money compared to the 4 trillion dollar federal budget Congress is debating right now, it could buy quite a few textbooks for public schools. Instead of putting together a several-hour-long parade, we could be using the money for more worthwhile endeavors.

Our president, however, is not known for devoting his time to worthwhile endeavors. Trump, who railed against the cost of Obama’s vacations, is shameless about his own flagrant expenditures. And while this is scarcely Trump’s biggest waste of money — the planned border wall has that dubious honor — it’s a particularly frivolous one. The French parade that gave Trump the idea is an annual tradition of Bastille Day, celebrating the citizens that rose up against autocracy and fought for their natural rights. It wasn’t a military parade for its own sake, as Trump is proposing.

As we all learned in high school, if we’re especially reductionist, Teddy Roosevelt’s foreign policy can be boiled down to “speak softly and carry a big stick.” Considering how paranoid Trump is about the size of his hands, it’s no surprise that he wants to show off his stick. And, to be fair, it is a big stick. The American military is peerless. It is not only the most powerful in terms of ships, aircraft, training and technology but also by far the most experienced. The American military complex has had the time to learn from its mistakes and to develop improvements in its armaments. And everybody knows it. Paradoxically, a military parade makes America look weak. It makes us seem like we need to be reassured that we’re still the best, like a bully flexing in the schoolyard. If Trump wants the world to think he has a big stick, he first needs to learn how to speak softly.

The types of nations that hold military parades like this are authoritarian regimes, desperate to appeal to nationalism and to appear too strong to challenge. North Korea, for example, just had a parade last week. Between his childish Twitter antics and the recent announcement of the military parade, Trump seems desperate to stoop to Kim Jong-un’s level. He’s too busy destroying the tradition of the presidency to understand that a more soft-spoken approach would give him more legitimacy that no amount of marching troops or aircraft can match.

One of the traditions that Trump is ignoring is that America doesn’t have military parades without reason. The only other American military parades have taken place at presidential inaugurations or to celebrate soldiers returning from war. They’re not usually held at the president’s whim — and for good reason. America is a republic, founded on the rule of law and civil liberties. The military is a necessary component of the state, but shouldn’t be needlessly glorified. In Federalist 26, Alexander Hamilton defends the principle of a standing army, arguing that military overreach was an “evil infinitely less likely to attend us in a united than in a disunited state.” Unfortunately, America today is a “disunited state.” Driven apart by partisanship and politics, we’re allowing the principles of our republic to falter.

But even in our disunited state, the armed forces are popular everywhere from New York to Phoenix. While 79 percent of Americans have confidence in their military, only 27 percent are confident in their elected officials. Generally, the armed forces have managed to stay above the petty partisan conflict that has plagued Washington. The spectacular failures of Iraq and Afghanistan have been (probably correctly) blamed on political administrators rather than the military itself. Even those who want to cut military spending and reduce the size of our military agree that they are doing a good job. It’s something we can all agree on.

Unfortunately, more and more Americans are also agreeing that democracy is a luxury. A recent poll found that a third of Americans would support a military coup in some circumstances. Of course, this doesn’t mean there is going to be an armed takeover of D.C. tomorrow. Our tradition of democracy is the strongest in the world, solidified over nearly 250 years. No matter how many military parades Trump throws, it’s unlikely that he’ll be able to topple it. However, the misuse of the American military for political cover is dangerous. Not only is it dangerous, it’s shameful. Our armed forces should not be reduced to expensive toys for the commander-in-chief to show off when he’s bored — or unpopular.

Milo Goodell is a sophomore Politics major. He can be reached at mgoodell@oxy.edu.