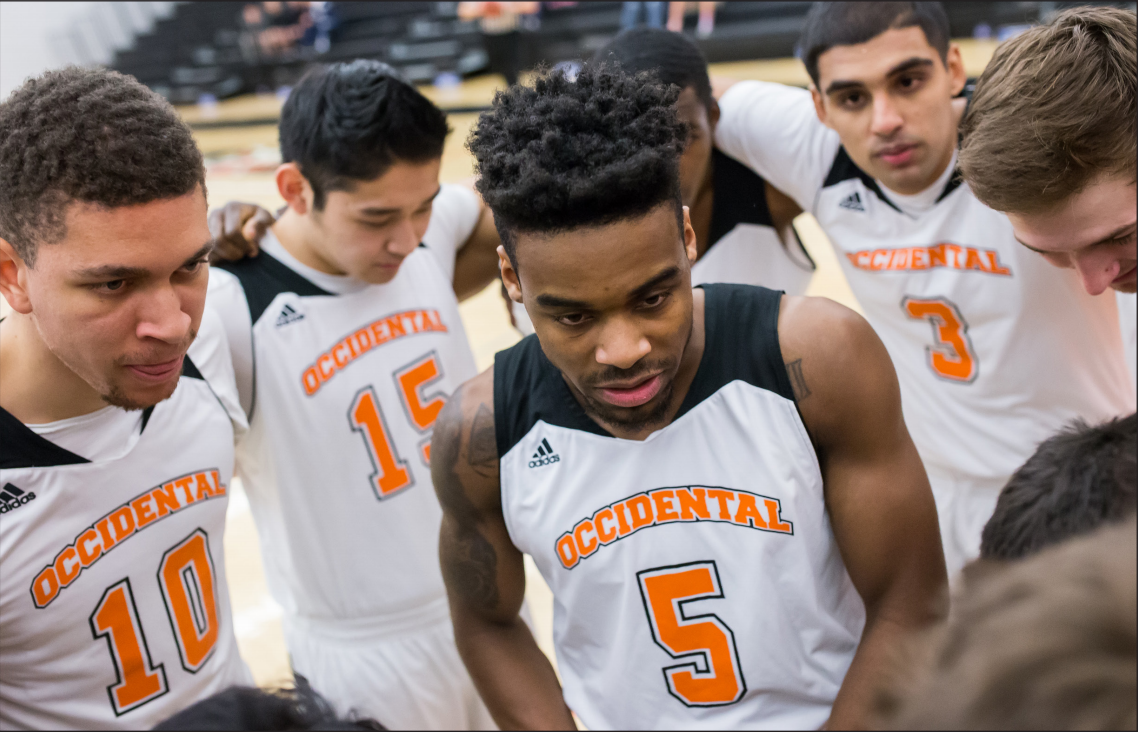 Andrew Johnson (senior) and Jay Miller (senior) are great friends, both in life and on the basketball court. Johnson and Miller have been members of the men’s basketball team at Occidental for four years, and friends since they became first year roommates. Johnson, a center/power forward, and Miller, a point guard, contend that their friendship has helped improve each other’s skills and team dynamic on the court.

“We have a lot of chemistry now, I know what he’s gonna do, he knows what I’m gonna do, you can see it in our game film we just have a great feel for how each other play and what each other’s tendencies are,” Miller said.

“I know that last year was probably our best year playing together because it was Jay’s first year back after a long time being injured and we were both very successful and were able to play off each other and have outstanding seasons,” Johnson said.

Even with their current season numbers, the senior stars will not be leading the Tigers (13-11) to playoffs. They have not let that faze them in their preparation for their final collegiate games.

“The way I look at it now, I’m just trying to have fun in my last few games. I’m hoping we can go out and just give a great effort, have fun and give everybody our best shot. As long as we do that, I’m fine at the end of the day, as long as we don’t lay down and give up, as long as we keep fighting … [Leaving] momentum for next year’s guys is what I wanna do,” Miller said.

Longtime Tigers’ Head Coach Brian Newhall was able to provide an outside perspective on the friendship of Johnson and Miller. Newhall has been happy to coach both players and has noted the way Johnson and Miller carry themselves with the team.

“Jay and AJ are rock solid people on and off of the court. Jay has fought through multiple injuries during his career, finishing with two quality seasons. Andrew has been an outstanding offensive threat all four years and will finish his career as the second highest scorer in school history, and both have worked hard to be leaders for the team outside of the gym as well as inside,” Newhall said.

Newhall also said he has been lucky to watch the players grow in their time as Tigers, helping them become more complete players, saying Miller has improved his decision making, ball handling and three-point shooting, while Johnson has improved his mid-range game and rebounding.

The duo is popular with younger players on the basketball team as well.

“I feel very lucky to have been able to play with Jay and Andrew these past two years,” forward Austin Dewitz (sophomore) said. “You couldn’t ask for better role models on and off the court. They have shown me what it means to be a student-athlete here at Oxy. Both Jay and Andrew have some [big] commitments outside of basketball, yet they show up every day ready to work hard. This forces me and the rest of our team to play up to their level.”

Off the court, Miller and Johnson seem like siblings, according to Dewitz. He said that they are always arguing, and that Miller loves to give Johnson a hard time.

Both players hope to head overseas after graduation to pursue a masters degree and to play basketball. Miller plans to get his degree in economics, while Johnson is more interested in biochemistry. Johnson hopes to attend medical school, while Miller will be more focused on succeeding in an overseas professional basketball league. But before that, both have confirmed they are going to enjoy their last two games here at Occidental.

In his final game at Rush Gymnasium, Johnson passed Finn Rebasso ’03 to move into second place on the Occidental all-time scoring list. He sits behind only Blair Slattery ’94.