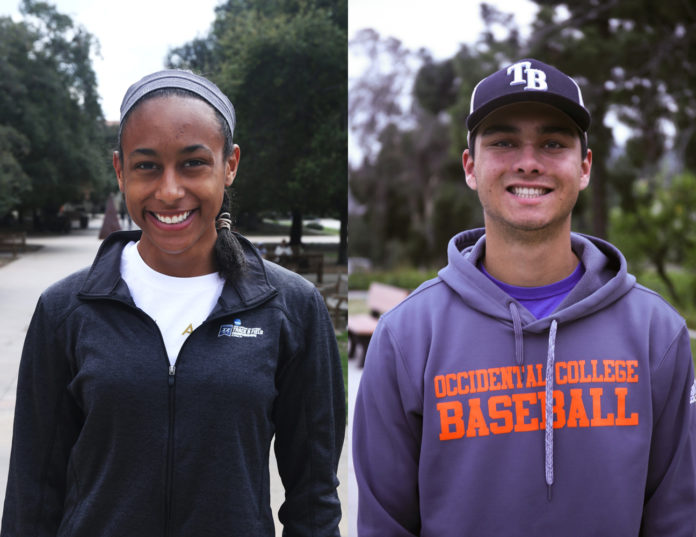 Despite stormy conditions March 2 at Pomona-Pitzer, Occidental’s women’s track team was able to come out on top of both Whittier and California Institute of Technology (Caltech) thanks, in part, to two wins by Jada Newkirk (sophomore). At the Southern California Intercollegiate Athletic Conference (SCIAC) opening meet, Jada placed first in both the women’s 200-meter and long jump. These achievements are especially impressive considering her injuries which include a sprained toe, pulled hamstring, and strained lower back.

Newkirk said these setbacks will not stop her from pushing on with the season and achieving her goals.

“This season, I’m looking forward to hopefully breaking the school’s record with my 4×1 team because last year we were .01 away from doing that,” Newkirk said. “I’m also looking forward to the performance of the women’s team, which has definitely grown and has a chance to either win or place really well in the SCIAC championships this year.”

Fellow teammate Mimi Miyamoto (sophomore) is feeling similarly enthusiastic about the ongoing season and believes Newkirk’s contributions to the team on and off the track are commendable.

“Jada is really hardworking. She’s got a lot of natural talent, and a lot of the people on the team really look up to her,” Miyamoto said. “She also always performs best when it’s warm outside, and the fact that she was still able to perform really well when it was cold this past weekend was impressive.”

“Jada’s season has gone very well thus far. She’s way ahead of where she was this time last year,” Yamaguchi said. “She worked hard over the break, and she’s done incredibly well up to this point and this past weekend shows that.”

Newkirk is a psychology major, and in addition to being a runner, she is a trained circus arts unicyclist, juggler and stilt walker.

Being new to the team did not stop Diego Ramirez (first year) from dominating the field March 2 during the baseball team’s second game that day against Centenary. Throughout the game, Ramirez pitched six innings with three strikeouts and no walks.

“We were able to get in an early lead,” Ramirez said. “Our offense was good, and we kept scoring a lot of runs which was really helpful in letting me relax. So I just had to go out there and make sure that I kept that lead.”

Despite this being his first season pitching for the team and playing college baseball, Ramirez was able to keep the lead the team got from the first game.

“It’s different than in high school. The game moves a little faster and everyone’s obviously a little better than high school,” Ramirez said. “It’s been a little bit of an adjustment, but I just treat it like baseball, you know? It’s just a game, just try and keep it simple.”

JP Flores (sophomore) also said he felt confident about Ramirez’s performance this past Saturday and is looking forward to continuing with Ramirez on the team.

“Diego is going to be a key contributor to this team for the next four years,” Flores said. “He is a quiet leader with an amazing work ethic. His performance wasn’t surprising to me; he comes to practice day in and day out knowing what he needs to do, and he gets it done.”

“Diego is a remarkable and talented member of the team who has only brought positivity to the field,” Kim said. “His performance on Saturday was nothing but great.”

With such a strong start, Ramirez is looking forward to the rest of the season.

“I’m looking forward to our conference games. They start next weekend so that’s really exciting. We think we will be pretty good this year.”

Ramirez is an intended kinesiology major, and when he isn’t throwing strikes, he can be found playing the piano.