Many Los Angeles residents have dusted off their bikes in their garages and began biking as a new form of exercise, transportation and stress relief during the COVID-19 pandemic. According to a May 2020 PeopleForBikes survey, nine percent of American adults said they rode a bike for the first time in a year. And as of September 2020, the NPD Group, an American market research company, reported a 203 percent increase in adult bike sales and a 107 percent increase in children’s bike sales priced around $200.

Matt Rolletta, the lead designer and co-owner of Swrve, a bike apparel and accessory shop in Glassell Park, said the demand for bikes has skyrocketed since the pandemic hit March 2020. According to Rolletta, the price of new bikes and secondhand bikes on platforms, such as eBay, spiked because of the increased demand.

Kjeld Clark, co-owner of à bloc, a cycling-inspired coffee, apparel and repair shop in Highland Park, said he observed many people digging up their old bikes to bring them to their mechanic to get tune-ups and parts.

“There were lots of spiders and pieces of greenery, because the bikes were left in people’s gardens,” Clark said.

Simultaneously, supply chain issues due to China’s COVID-19 lockdown made the materials to build and fix bikes increasingly harder to find, according to Rolletta. As raw materials, such as aluminum and steel, were in short supply, they went to the automobile industry instead of the cycling industry once China increased production after the lockdown.

“I was riding with a friend, and he has a couple of kids, and he said for the life of him that he can’t find inner tubes for his kid’s bike,” Rolletta said. “He said he patched his kid’s tube like 12 times because he couldn’t find a new tube, so it’s little things like that became more noticeable for us.”

According to the manager of Occidental’s Bike Share, Anaiah Little-Diop (junior), the increased interest in cycling throughout the U.S. has made its way to Occidental’s campus as well. Little-Diop said the number of emails of people inquiring about Bike Share has increased this past semester, and the service has been busy with new people eager to ride. She also said people have been dropping by Bike Share more often to get their bikes repaired.

“The first day we came back, we didn’t even advertise that much, but four people took bikes immediately,” Little-Diop said.

As cycling has increased in popularity, LA has rolled out new strategies to protect cyclists. Mayor Eric Garcetti announced Slow Streets LA, an initiative to curb traffic and create a safer space for recreational activity May 2020, benefitting new and old cyclists alike. The city has approved multiple Slow Streets in Eagle Rock within the last 10 months. 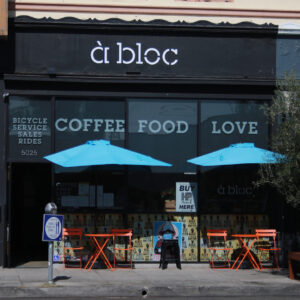 Originally from Gloucester, England, Clarke said he admired how his home country transformed old railway lines into bike lanes. His partner and co-owner of à bloc, Jenny Johnson, said Los Angeles County did the same with the Chandler Bikeway in Burbank, CA.

“We’re starting to see cities realize the importance of bike culture and making sure that people are safe on their bicycles,” Johnson said. “It’s slowly but surely happening — but slowly. It’s an uphill battle.”

Alternatively, Rolletta said no city is responding very well to the increase in bikers because of the prevalence of the automotive industry, except for New York City because its Department of Transportation invested in bike infrastructure last fall.

Little-Diop said one of her goals for Bike Share is to make biking more accessible to students. For her, finding ways for students to still rent out bikes after they graduate, especially low-income students, would be incredibly rewarding. She also said she wants to build more of a subculture on campus around moving and getting around by wheels, with activities such as roller skating and skateboarding.

“Bike Share provides agency that students wouldn’t have before, like if they didn’t have a car,” Little-Diop said. “I think Oxy before COVID was very much a bubble and was really hard to get off campus and explore. I think it’s a way for someone to have things in their own hands and move around if they want.”

Joel Saarinen (senior) said he thinks more people should ride bikes because it is a cheap form of transportation and can be a workout at the same time.

“I’m definitely a big proponent of bikes in just trying to reduce your carbon footprint, making streets and roads safer potentially and increasing infrastructure for biking, such as adding new bike lanes and places to park your bikes,” Saarinen said.

Saarinen said one of his favorite places to bike is to the Trader Joes on Eagle Rock Boulevard because it is the perfect biking distance from him. He also said he likes to go on more scenic bike rides with his friends that involve hills, including a trail from West of the Rose Bowl to the Flintridge Sacred Hearts Academy that has an amazing view.

Rolletta, who is also an avid biker, said he tries to bike a few times per week. One of his default loops is the Cherry Canyon trail in Glendale. For him, biking is a way to enjoy his surroundings and understand a new neighborhood.

“With so much unknown, it’s a nice solo activity you can do to keep your brain sane. I think that’s probably the base of it,” Rolletta said. “Especially when there are so many other things that we can’t do, this gets you out and, you know, clears the head.”