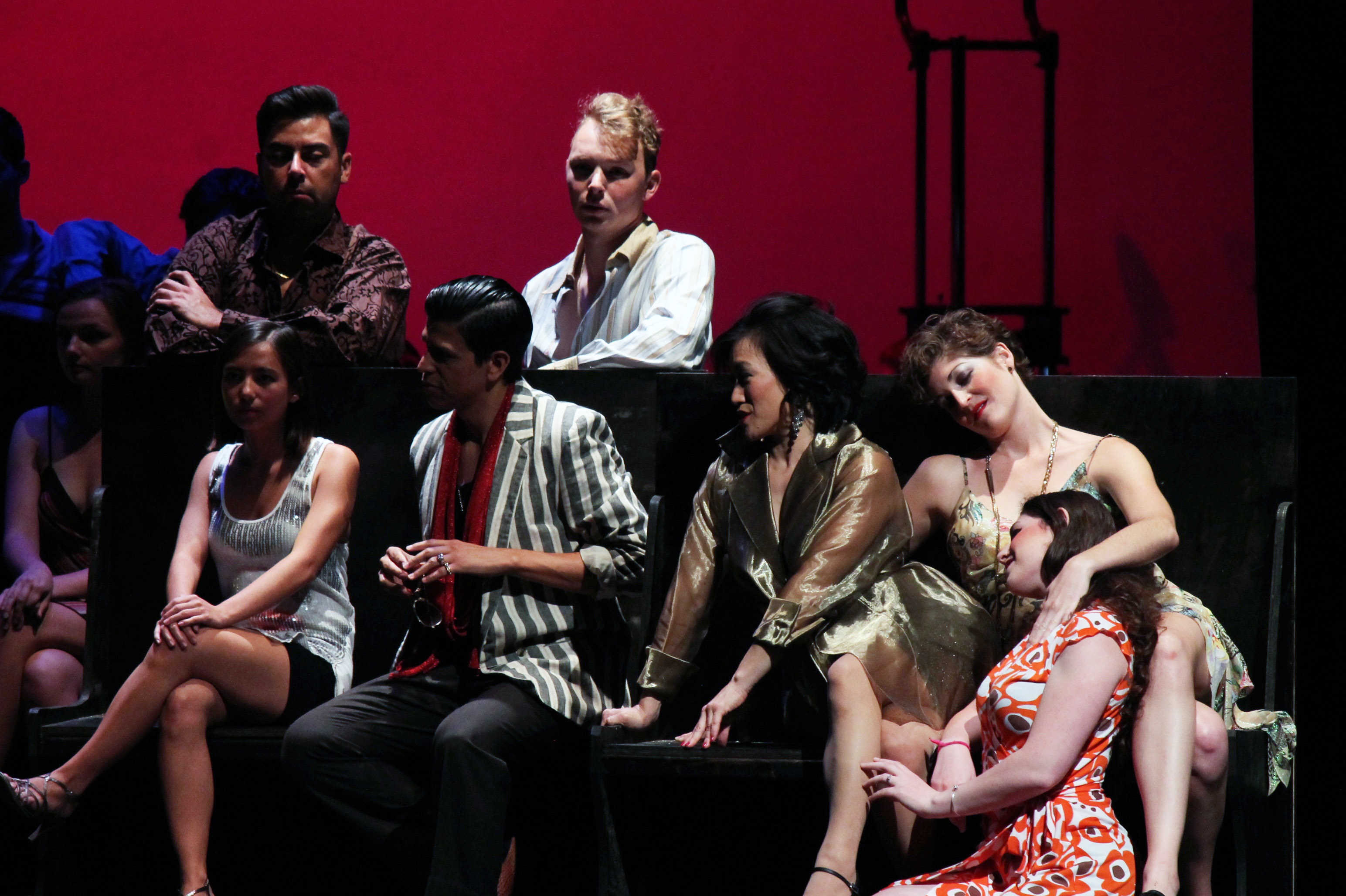 The Occidental College Glee Club dove headfirst into this semester by putting on a full operatic production in conjunction with the local company, the Pacific Opera Project (POP) based in Highland Park. The two performances of the Igor Stravinsky opera, “The Rake’s Progress” took place the evening of Saturday, Sept. 17 and the afternoon of Sunday, Sept. 18.

Occidental’s music department has partnered with POP since the Spring of 2015, according to its engineer, Professor David Kasunic. POP was founded in 2011. According to the POP website, the mission of the company is to provide entertaining and financially accessible opera productions to audiences across Los Angeles. They put on a wide stylistic range of operas, from Mozart to Stravinsky to Sondheim, and their ticket prices always from range $20 to $50, often less than half of those at major opera companies.

Glee Club conductor Desiree LaVertu explained that the partnership reflects the college-wide mission to engage with the community, and that collaborative efforts, like “The Rake’s Progress,” display how community partnerships can enrich the undergraduate experience.

“We are a small college, and small colleges don’t put on huge opera productions … So bringing the Glee Club into it was a chance for our students to experience being in a full operatic production,” LaVertu said.

The production was an especially unique opportunity for many Glee Club members who are not music majors and may not have another chance to participate in a professional opera, according to LaVertu.

Glee Club member Jenny Dally (senior) noted, the opportunity was as unexpected as it was exciting, and while the experience was unique and beneficial, the short time span was not without challenge.

“It was kind of daunting,” Dally said. “Especially since Stravinsky is so difficult musically to learn.”

Sophie Gabel-Scheinbaum (senior), Glee Club member and co-director of “The Accidentals,” Occidental’s women’s a cappella ensemble, spoke to how rewarding the experience ultimately was.

“Although we had about a week turnaround between receiving the music and performing, it was a fantastic opportunity to work with very talented professionals and perform music so contrasting to your more conventional choral or contemporary style,” Gabel-Scheinbaum said.

Stravinsky is famous for the difficulty of his musical works. “The Rake’s Progress,” first performed in 1951, is a hallmark of his neoclassical period of composition, where he drew inspiration from music of the 18th century. But Stravinsky is most well-known for pushing the boundaries of music with respect to rhythm, harmony and tone. “The Rake’s Progress” is demanding in this way, with its unexpected rhythms of speech and unusual harmonies.

“The students got the music on Wednesday [Sept. 7], and we just had to learn everything and then go into the rehearsals … and then it was a long week,” LaVertu said.

The Glee Club’s rehearsals with POP began Sunday, Sept. 11, just four days after they first received the music. The club then rehearsed for five nights straight, culminating in a dress rehearsal Thursday night (which was free and open to the public).

“It was a bit overwhelming time-wise, and if we were to do this kind of thing again, we would probably have to look at that really carefully,” LaVertu said.

In addition to singing with POP’s official ensemble, the club members also joined the company onstage at various points in the production to play characters ranging from hooligans and prostitutes to rich collectors to asylum inmates.

“It was nice because I could kind of follow the chorus around,” Dally said. “They were really helpful … while we were just starting to get off the score, we could kind of lean on them a little bit.”

Dally and LaVertu both remarked upon how helpful and grateful the POP members were to the students, especially the principal cast members and the art and music directors.

“[The directors] were very pleased to have them there,” LaVertu said. “The principals were all very warm and generous and kind to the students, which I really appreciated.”

While the difficulty of the music and the condensed rehearsal time were challenging, Dally said the production was a great bonding experience for the Glee Club, as well as an opportunity for them to push themselves.

“I was very impressed … in how quickly they learned such a difficult score,” LaVertu said. “I was very proud of them … and proud of their good spirits throughout the production.”