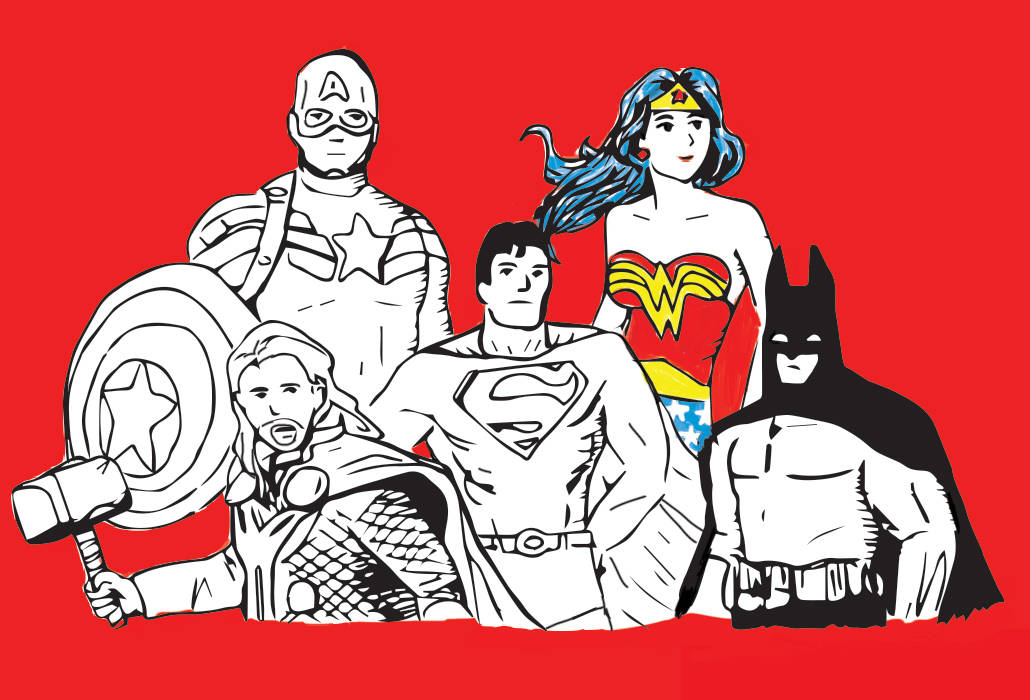 With a string of new smash-hit blockbuster superhero films coming out every summer, it’s easy to forget that not all action-packed, special effects-filled movies are the same. The nuanced differences between major publishers like Marvel and DC are easily lost on viewers that are less well-versed in comics and their cinematic universes. From Batman to Superman to Captain America and Thor, superhero movies can easily blend together into one spandex clad package. But even to someone who isn’t trained in geek culture, there is a clear discrepancy in these titles. Female representation in superhero movies is severely lacking.

Five actors have played the character Batman in nine Batman films and four actors have played Superman in six Superman films. The first ever Wonder Woman film will be released June 2, 2017. Besides the awesome 1970’s “Wonder Woman” TV series starring Lynda Carter, Wonder Woman-centered media has been mysteriously missing through the rise of superhero media.

In 2016 Wonder Woman turns 75 and as one of DC’s biggest and oldest characters, it’s hard to imagine why it’s taken until now for there to be a full-length film about her. The trailer for the long awaited Patty Jenkins directed film was released July 23, 2016, at San Diego Comic Con. Currently it has more than 25 million views and influential fans like Forbes magazine have given it high praise.

Wonder Woman has been a successful and popular character. So again we wonder, why has it taken so long for a Wonder Woman film? In July 2016 the comic Wonder Woman Issue 2 by Nicola Scott and Greg Rucka sold 103,759 copies. This issue’s sales topped the likes of Superman, Spider Man, Captain America and Deadpool (who absolutely killed the box office back in February). Wonder Woman is popular and profitable. Pam Lifford, the president of Warner Bros. Consumer Products stated the franchise has “amazing potential” in the May 2016 issue of “License Global.” Critics loved Gal Gadot’s portrayal of the heroine in the train wreck that was Zack Snyder’s “Batman v. Superman.” With all the positive reception of the role and still such a lack in female-fronted hero films, femme-identifying comic fans are left feeling ignored, excluded and unrepresented in the world of comics.

Unfortunately the problem of female representation doesn’t just apply to the DC cinematic universe. Marvel, known within geekdom as a beacon of heroic cinematic perfection, has had its fair share of problems. In the six years of the current Marvel Cinematic Universe since 2008’s “Iron Man,” not a single female hero-led movie has been realized. Sure, there is Scarlett Johansson’s Black Widow in the “Avengers” franchise. But it’s important to consider that writer/director Joss Whedon’s presentation of this character gained criticism for oversexualizing her and establishing Black Widow as a romantic counterpart to The Hulk. Specifically, after 2015’s “Avengers’ Age of Ultron,” Indiewire called Whedon’s directorial decision a “disappointing treatment” of the heroine.

Marvel and DC alike, have been attempting to address the lack of female-led superhero films. Just this summer Academy Award Winning Actress Brie Larson signed on as Captain Marvel a.k.a. Carol Danvers for the upcoming “Captain Marvel” film, which will be Marvel Studio’s first female-led film. Though the film won’t hit theaters until 2019, Larson is likely to make a cameo or two in upcoming Marvels before then.

Perhaps what’s most troubling about of the lack of women starring in their own superhero films is the limited spectrum and lack role models presented to femme geeks. Despite loving the movies and frequently going to midnight showings, it can be difficult for a female fan to connect with the overly male-centered and hyper-masculine themes consistently found in super hero movies. There’s only so much you can identify with a muscle man in tights.

For now, Wonder Woman’s revival is exciting. But hopefully this well-deserved move towards gender equity is indicative of the growing role of women in comics, and not just a one time hit.

Have a favorite femme superhero? Email weekly@oxy.edu or tween us @OxyWeekly.