The Galapagos are an archipelago of volcanic rock 600 miles off the coast of Ecuador and have a special place in scientific history as the location where Charles Darwin tested and developed his theory of evolution. This semester I will be studying evolutionary biology and ecology in the Galapagos Islands through Universidad San Francisco de Quito.

As so famously supported in The Origin of Species, things change. Even though the Galapagos are famous for their particular set of biodiversity (giant tortoises, finches, etc.), issues related to globalization have threatened the islands since Darwin’s time. In this blog I will discuss conservation and ecology issues that I encounter in the Galapagos in order to reflect on contemporary wildlife conservation epistemologies and practices.

Instead of the standard syllabus week, my first week of class took place in one of the most remote sections of the Amazon basin, the Tiputini Biodiversity Station in Yasuni National Park. Yasuni National Park is one of the most bio-diverse sites in the world and in 1989 was named a UNESCO Biosphere Reserve. Because of Yasuni’s renowned reputation for biodiversity, I expected that I would be spending the week in pristine jungle. In reality, what I encountered was a situation that can only be described as a political mess with no answer (the cynic in me sees no answer, but I implore you to try to think of one).

Currently Yasuni has three identities: a national park of Ecuador, the ancestral home of the indigenous Waorani community and the site of Repsol Oil’s Amazon drilling operation. These three groups have entirely disparate motives and thus exist in conflict.

Last year Yasuni was in the news because Ecuador’s ITT initiative failed and drilling began in the park. The ITT (Ishpingo-Tambococha-Tiputini Oil field) initiative was essentially ecological blackmail. The Ecuadorian government opened the ITT fund in 2010, asking the international community for 3.6 billion dollars over a 13 year period to indefinitely refrain from drilling the ITT oil field in Yasuni National Park. In late 2011, after raising more than $100 million (more than the fundraising goal for 2011), Ecuador’s president Rafael Correa scrapped the plan, and drilling began summer of 2013.

In order to enter Yasuni, your name must be on a list at Repsol’s checkpoint. The checkpoint is essentially the same as going through airport security, but instead of facing TSA, travelers are screened by the oil company. Even though the checkpoint is good because it controls the land inside the park, it also instills the overwhelming feeling that Yasuni is Repsol land first and Waorani land second. After going through tight security, visitors enter the road built through Waorani land by Maxus Oil (US) in 1992 to transport oil out of the park. The road has forever changed the culture and way of life for the indigenous community and now poses an ecological problem for the national park.

Before the oil companies came, the Waorani were semi-nomadic. Once the road was built the communities erected permanent settlements lining the road. Part of the agreement that Repsol has with the Waorani says that all Repsol vehicles must stop to transport Waorani on the side of the road. This transportation allows the community to hunt in greater numbers and has been shown to facilitate the transport of wild meat outside of the park to be sold by the Waorani on the black market. Hunting in greater numbers in a concentrated area is also detrimental to the ecology of the area, which is contrary to the aims of the national park.

While walking along trails at the Tiputini Research Station, our guide would stop to tell us legends about children lost in the jungle who were saved by Amazonian spirits. Each of our guide’s stories ended with “es verdad,” it’s the truth. These stories are products of the fantastical nature of the jungle and are part of the culture of the region. When asked if these kinds of mystical occurrences happen today, our guide responded that these stories are all from the past, that the magic of the jungle is gone and its disappearance coincided with the appearance of the oil companies in Yasuni.

Yasuni’s identity is multifaceted and the answer isn’t as simple as saying that the oil company is entirely to blame for the park’s problems. The oil companies have already changed the Waorani way of life. Now it’s a question of how to improve the relationship between the indigenous community and Repsol so that Yasuni’s identities as a National Park, Oil reserve and Waorani home can be more balanced. Reconciling these identities is the only hope for the magic to return to Yasuni.

Photos from my week in Yasuni National Park: 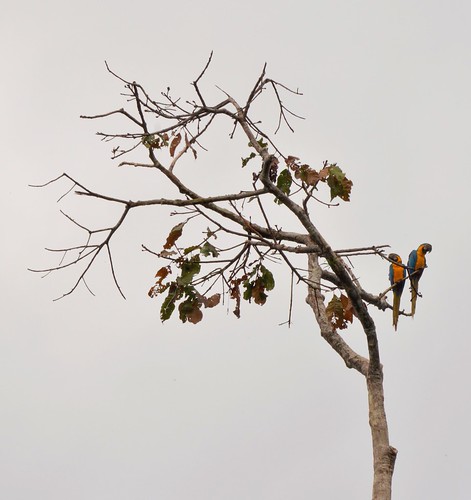