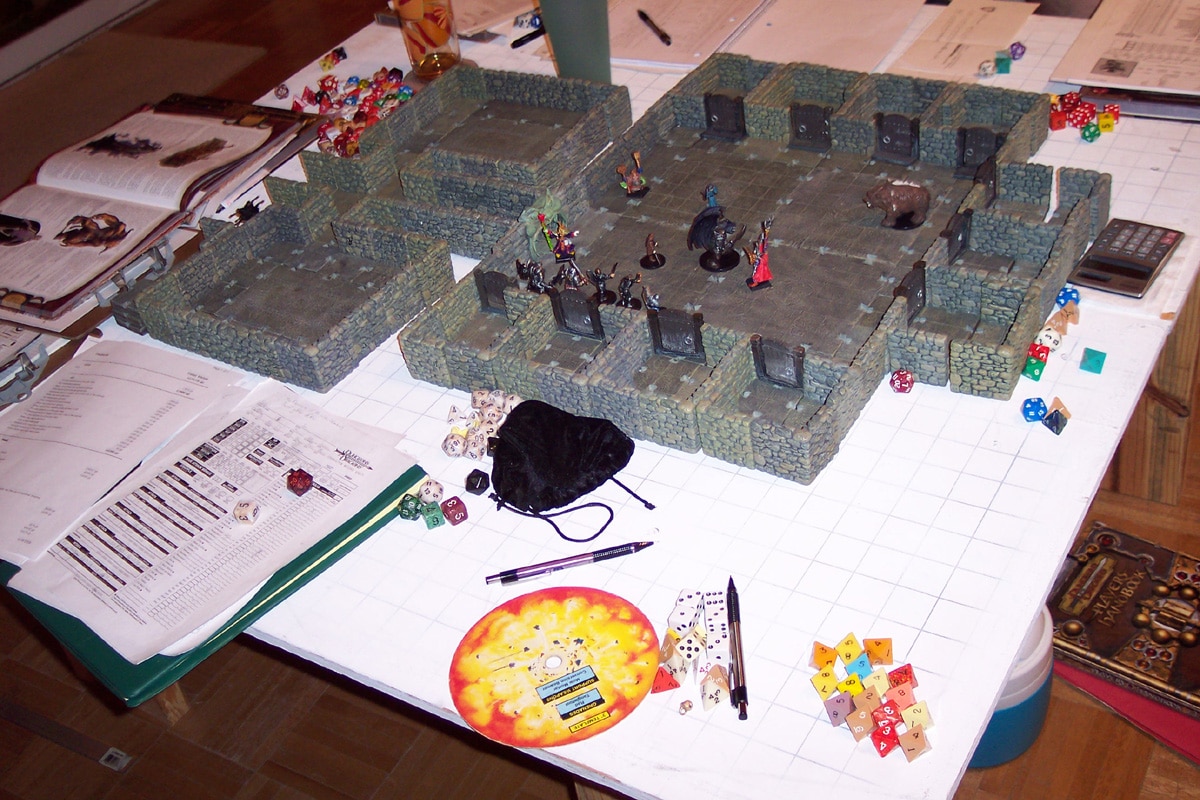 A crowd of students clustered around a small table top in the Haines common room, their chairs pushed as close as possible to the action. Instead of revision notes or study guides, numerous multi-colored dice covered the table’s surface. The group watched two players as they approached an unsuspecting Orc camp ready for battle. This is the scene from the first Dungeons and Dragons (D and D) Program organized by resident advisor Harper Hayes* (senior), which took place Oct. 26 from 5–7 p.m. In an email sent to students, the event was described as a fun game for people of all backgrounds, ages and skill levels.

Since its inception in 1974 by American game designers, Gary Gygax and Dave Arneson, Dungeons and Dragons has held its place in the gaming world despite the advent of large online role-playing games like World of Warcraft. By 2004, consumers had spent more than $1 billion dollars on Dungeons and Dragons related products according to an interview with Gygax, Arneson and the BBC.

Before a game begins, each player must create their character and record the details on a character sheet. First, a player determines their character’s ability scores, which consist of strength, constitution, dexterity, intelligence, wisdom and charisma. Strength, for example, affects the character’s ability to lift and carry weights, melee attack rolls and defines several combat actions, whereas dexterity encompasses a number of physical attributes including agility, reflexes and balance. The player then chooses a race such as Human or Elf, a character class or occupation such as fighter or wizard, an alignment (a moral and ethical outlook) and other features to round out the character’s abilities and backstory.


Sara Packer (senior) helped demo a small trial game for the event in Haines and helped dispatch one of the Orcs. For those unfamiliar with fantasy races, an Orc is a stupid, brutish monster who often live in caves or villages according to Alvaro Martín Fernández, teaching assistant in the Spanish department, who was also present at the RA event. Packer, or rather, her character, turned an Orc into a cat after temporarily imprisoning it in a force field. Packer explained that her boyfriend encouraged her to explore the world of D and D, though she was reluctant at first.

“My boyfriend plays pretty regularly [but is] terrible at teaching people how to play something so I’ve never played with him. But this semester, Harper and Tristan [Boblet] were starting a campaign and [invited me to join],” Packer said.

Tristan Boblet (senior) joined Packer during the demonstration. Boblet has seen D and D grow in popularity throughout the years he has played.

“I’ve been playing for six or seven years now. It’s probably more popular than it was then. The community I come from is very conservative, a backwoods community, so that sort of thing was very frowned upon, it was seen as Satan’s game. It’s still pretty frowned upon,” Boblet said.

During the course of the game, each player directs the actions of their character and their interactions with other characters in the game. This activity is performed through the verbal impersonation of the characters by the players, while employing a variety of social and other useful cognitive skills, such as logic, basic mathematics and imagination. A game of D and D often continues over a series of meetings to complete a single adventure and sometimes even longer into a series of related gaming adventures, called a “campaign.”

“It’s so complicated to learn,” Packer said. “But I just have to know what I want to do. Also, I think there’s a touch of ridiculousness which is really fun, with the campaign we are doing there is four of us and we are interacting at a level you wouldn’t get with a video game.”

Martín Fernández is also an avid D and D fan and has played D and D for a total of nine years — four as a player and five as both a player and a dungeon master (DM), or game organizer.

“An old friend of mine invited me to my first game,” Martín Fernández said. “I had nothing better to do that particular weekend, and since I liked reading fantasy and science fiction and was mildly curious about it, I ended up going with him. It was weird, mainly because I was suddenly introduced to so many people I didn’t know, but looking back I did have fun. Sometime later he invited me again. And again. Before I knew it, I didn’t feel weird anymore.”

Those present at the RA event kept their eyes on each other and on the multi-colored dice they were rolling. As a result, there was a distinct lack of cell phones in Haines common room. According to Martín Fernández, this may stem from the atmosphere at a D and D game.

“I think that’d be because I truly enjoy the friendly atmosphere of a game of D and D between good players who know and respect each other,” Martin Fernandez said.” You get together to explore and build awesome worlds and adventures together, and that just doesn’t happen often in your everyday life.”

*Harper Hayes is a staff writer for The Occidental Weekly.