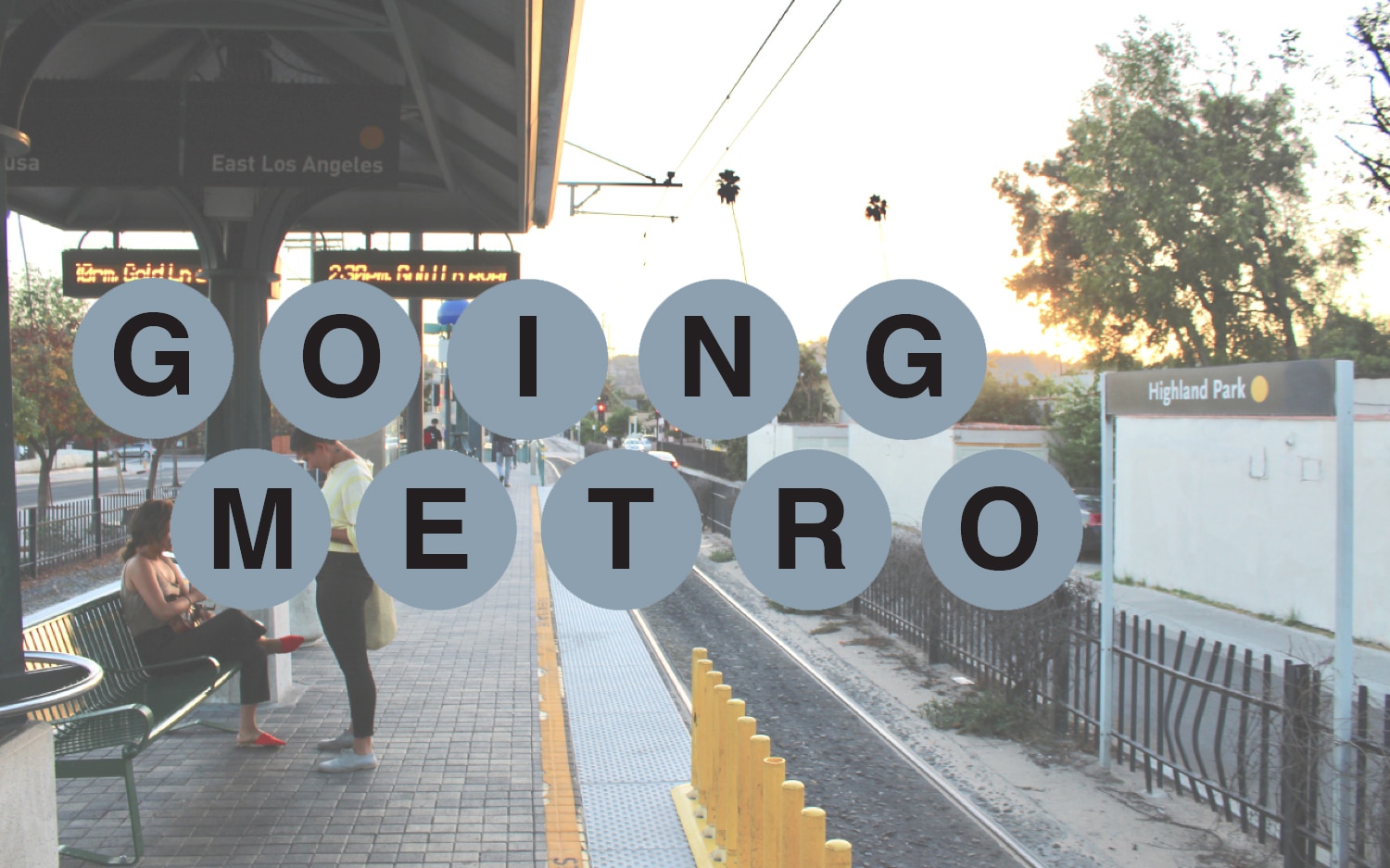 It is a Saturday night, your wallet is light and you are aching for a night out on the town. Or maybe it is a dull day, things are not going your way and an escape to someplace new sounds delightful. Thankfully, you can head to several places in the city, chomp down on a good meal or visit a museum and get back to campus all for $10 or less. Traveling through the city is cheap and easy with Metro, the public transportation system of Los Angeles. The rail services are made up of four light-rail lines and two subway lines that together run a combined total 105 miles, according to Metro.

Eli Chavez (senior), an LA native, said that the rail system has improved considerably since his childhood. Chavez said there were no connections to the beach when he was growing up, but that they have since added stations all over town. Although the Metro continues to expand its range, Chavez said that many students he has come across on campus have no clue just what they can do with the rail system.

“Many people don’t even know where the nearest Metro stop is. People are learning, but it is not very popular,” Chavez said.

The Highland Park station is the closest metro stop to campus, 2.2 miles away, according to Google Maps. Highland Park sits in the middle of the Gold Line, which goes as from Azusa and to Atlantic station in East Los Angeles. TAP cards are available for a one time purchase of $1 at any rail station. The card must be tapped to a ticket-reading machine every time you ride the train. For each subsequent trip, you can reload the TAP card for $1.75 for a one-way trip. TAP cards can also be bought and reloaded on campus at the Student Activities Center.

To reach the Highland Park station using public transportation, catch a 20-minute ride on Metro’s Bus 83 (destination Monte Vista) from the intersection of York Boulevard and Armadale Avenue. Get off at the Monte Vista and Avenue 59 stop and turn left onto Avenue 59. Continue on Avenue 59 until Marmion Way, and the station is on the right. The bus ride costs $1.75 in cash or TAP card and the Bus 83 schedule can be found on the timetable on Metro.net.

The Bengal Bus, Occidental’s free ride service, can get you to the station and back for free during their service hours. The Bengal Bus picks up students at any location within a 5-mile radius through their app, TapRide, and from the front of campus. The service runs from 6-9 p.m. on Monday, Tuesday and Wednesday, 6-10 p.m. on Thursday and Friday and 7-10 p.m. on Saturday.

Through Bike Share, Occidental’s free bike rental service, one can also cycle their way to the station in about 15 minutes. To rent a bike, visit the Bengal Room between Tuesday and Friday from 12-6 p.m. Bike Share bikes come with a basket and lock as well as helmets by request. Gabe Watson (senior), Bike Share manager, says the trains are very bike-friendly.

“Train cars come with sections in which you can store your bike,” Watson said.

Each station also has a rack to lock bikes.

South Pasadena, only four minutes away from the Highland Park station, is the closest destination from Occidental. Once you get to Highland Park, take the Gold Line toward Azusa and get off at the South Pasadena station.

For the movie lovers out there, the independent movie store Vidéothèque on Mission Street is the place to be. The store is similar to the special collections of Clapp Library, with books covering each decade in every direction. They offer a wide variety of foreign films, which can be found throughout the store sorted in sections by their respective languages. To get to Vidéothèque from South Pasadena station, turn left from the arrival platform and head north until Mission Street. Vidéothèque is a five-minute walk down the street on the left.

Venture into the lively atmosphere of downtown Pasadena by staying on the Gold Line toward Azusa and getting off at the Memorial Park station.

In Old Town Pasadena, dining options are plentiful. From Intelligentsia Coffee to Umami Burger or the Dog Haus Biergarten, any hungry Metro rider will be sure to find their spot. If you happen to be searching for something healthy yet filling, look no further than True Food Kitchen, located on the corner of Colorado Boulevard and South Pasadena Avenue. The organic restaurant is a personal favorite of Esme Epstein (first year). Epstein prefers the pizzas and bowls, which she said are exceptionally fresh.

“They really have whatever you are looking for,” Epstein said.

To walk amongst the stars on the historic Hollywood Boulevard Walk of Fame, take the Gold Line down to Union Station and switch over to the Red Line towards North Hollywood. The Hollywood Highland station is only a few feet away from the TCL Chinese Theater and right across from the Hollywood Sign Vista Point, a scenic lookout of the Hollywood sign.

The Hollywood Bowl amphitheater, which hosts a plethora of concerts and festivals, is also reachable by the Metro. From the Hollywood Highland station, take a left onto North Highland Avenue and walk for about a mile until the entrance. The on-site Hollywood Bowl Museum offers free admission for their exhibits that highlight the history of Hollywood performers and creators who have performed at the Bowl.

Outside of popular tourist attractions, Hollywood Boulevard is also home to Muji, a Japanese stationery store, and 25 Degrees, a 24/7 diner that serves hamburgers and milkshakes for late night cravings.

“Even though I’m from Los Angeles, going to Hollywood is always a shock. It’s so different from where I’m from, the South Bay. Its funny to see the tourist side of the city,” Annis Roberts (junior) said. “Being only a train ride away from a whole different world gives you perspective.”

Little Tokyo is only 20 minutes from the Highland Park station, according to Metro. To reach Little Tokyo, take the Gold Line train toward Atlantic to the Little Tokyo stop. To get to Japanese Village, one of Little Tokyo’s main attractions, turn left when exiting the Little Tokyo station and head south on Alameda Street. Turn right onto 1st Street and the village will appear on your left after a three-minute walk.

The stunning Yagura fire tower, which looks like a log cabin on stilts, stands before the entrance to the village. According to KCET, the tower was built in 1983 as part of an effort to revitalize Little Tokyo. When hunger strikes, the Nijiya Market at the southern end of the village is stocked with a great collection of fresh sushi as well as an excellent selection of Hi-Chew candies. The Japanese American National Museum, located at the intersection of 1st and Alameda Street, is the largest museum dedicated to Japanese ancestry in the United States. The admission is $6 for students with their college ID.

From Highland Park, take the Gold Line train south toward Atlantic and get off at the Chinatown station, four stops away. The Metro stop is designed in traditional Chinese architecture and lined with a sea of hanging Chinese lanterns. To reach Chinatown Central Plaza, turn right onto North Broadway Street and continue until Gin Ling Way, a pedestrian street with a traditional Chinese gate in front.

The plaza has several novelty stores and Chinese restaurants. From June to August, the plaza holds their Summer Nights festival on every fourth Saturday, featuring live music and artisanal crafts. If you are looking for unique gifts, check out the Hong Kong Import shop in the plaza. The store sells everyday items such as stationary and beauty products, but also traditional Chinese lanterns and rugs.

To avoid highway traffic or an expensive Uber ride, take the Metro to Santa Monica beach. From the Highland Park Station, take the Gold Line to Union Station. Follow signs at Union Station for the Red Line trains, which are located near the bus terminal. Take the Red Line toward North Hollywood and get off at the Seventh Street and Metro station. From there, follow signs for the Expo Line and get on the train bound for downtown Santa Monica. The trip takes about an hour, according to Metro — about 20 minutes less than going by car on a Saturday afternoon, according to Google Maps.

The Metro station ends at Colorado Avenue which leads directly to Santa Monica Pier. The Pier has carnival rides and several family-style restaurants. For a simple beach snack, try the BatterFish food truck, regularly parked on Ocean Avenue between the Pier and Wilshire Boulevard.

For colder days, the Third Street Promenade, a pedestrian walkway with stores and live music is a great place to window shop. On Sunday mornings, head south on Ocean Avenue to see the hundreds of local vendors selling produce and artisanal goods at the Santa Monica Main Street Farmers Market.