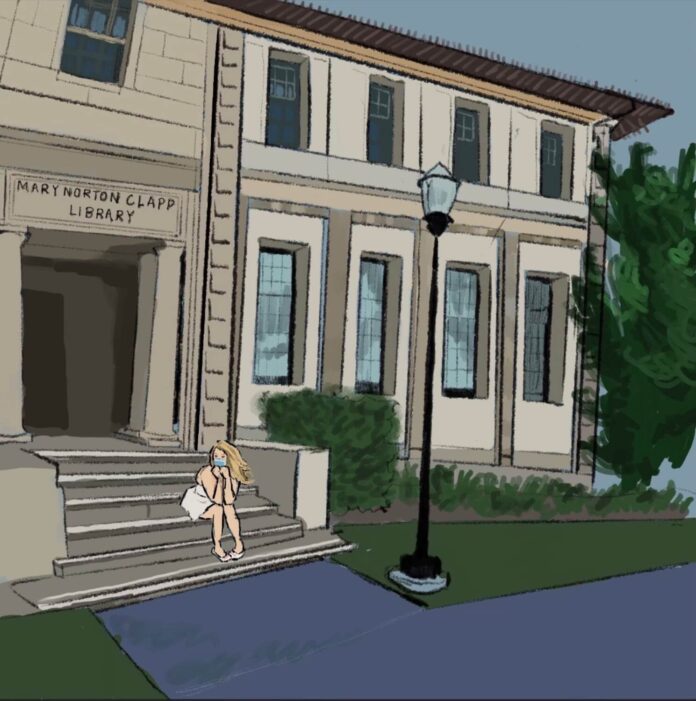 Last year, during the very beginning of the plague, The Occidental published a series called “Letters From,” in which dispersed Occidental students wrote about their current living situations, quarantine and the state of the pandemic from various corners of the country and the world. When I read these letters, or when I reflected on the spread of the novel coronavirus, I used to long for the day that the pandemic would magically be over and I could return to college. Now, I’ve been back on campus for a semester and a half, but I don’t feel the sense of magic that I was hoping for. With so little social stimulation during my time in quarantine, I think I’ve developed something akin to social anxiety, or maybe just a general fear of acquaintances and strangers. Even now with more social activity under my belt, my year has been centered on relearning how to be around others again, and grappling with how quickly we’re expected to forget about the effects of the pandemic (which is still happening).

Looking back, I find it amusing that we thought shuffling and cramming over 2,000 nervous, depressed, sun-shy, socially anxious, stimulus-deprived young people into a one to two mile radius would feel normal, let alone sane. Not only does physical proximity with hundreds of people on a small campus feel strange, but I have forgotten how to do a lot of things like interact normally with my peers. Minute social interactions and behaviors that I never experienced during the pandemic suddenly became relevant again. Small actions like raising your hand in a full classroom, sharing a glance with someone you find cute, walking down the quad and saying hi to a group of people, orienting your body in a group and talking to a new friend after class all felt foreign — like I had been dropped into an alien land without a guide on their customs.

I spent quarantine living with six other people and a cat. Since we spent all of our time together, and we were the only people around, there were very few social dynamics to consider. Conflict, if any, was centered around joke arguments, what show to watch or from where to order food. It was simple and comforting during the pandemic to be around only a few close friends whom I trusted and knew intimately. Coming back to school, I found myself inundated with an influx of shiny new people in my day-to-day life. People with their own opinions about music, TV, books and culture, people who have difficult feelings and tons of baggage, people with conflicting politics and ideologies, people who are strange and exciting, but above all, unfamiliar. It was exhausting. I suddenly went from seeing the same six people every day for more than a year to at least a few hundred people on a daily basis — it’s no wonder I can’t handle being on the quad for more than a couple of hours at a time.

I was infinitely lucky to be able to quarantine away from the tendrils of COVID-19 and not have to go to work in-person. I felt sheltered knowing that my world was confined to a 200-square-foot bedroom. I was safe. Dry. Comfortable. In the real world, I’ll leave these confines and suddenly be pressed up against three strangers in the Marketplace pizza line — one of whom I awkwardly said ‘hi’ to because we took first-year Spanish together and then two baby-faced first years I’ve never seen before. Even now, it’s jarring to walk into a space expecting to recognize everyone, but I can’t. It feels like a dream where everyone’s face is blurred out, and I’m frantically trying to find a friend.

One of the strangest aspects of being back at school is that we’re still in the middle of a global pandemic. The average daily death count in the United States still tops at least a thousand, and LA just dropped its mask mandate. I have yet to hear anyone in my day-to-day life mention that 969,000 people in the United States have died from a disease that only emerged two years ago. Even though many of us are vaccinated and enjoy our fair share of social interaction without fear of COVID, we’re still engaging in a mass event of continual forgetting, or a refusal to acknowledge how dark these past years have been. Is it too soon to talk about it? Too hard, painful, impossible? Maybe, but this current gray-era of denial feels like a badly executed “1984” spoof.

On the one hand, I understand that the level of loss is difficult to grapple with, and that we’re burnt out from dealing with and talking about the repercussions of the pandemic. On the other, there’s a level of collective trauma from the number of deaths that have occurred in the past year, as well as the long-term effects of quarantine that we haven’t healed from and that we don’t talk about enough. We need to start a conversation about how quarantine made us a little weird in the head, and how no one fully knows how to deal with it. It doesn’t seem like anyone has the energy to discuss how returning to school hasn’t been as easy or seamless as initially thought, but I want to talk about how messed up we are. I’m still relearning how to enter civil society again, and I’m ready to hear from others who are just as scared and jumbled as I am.