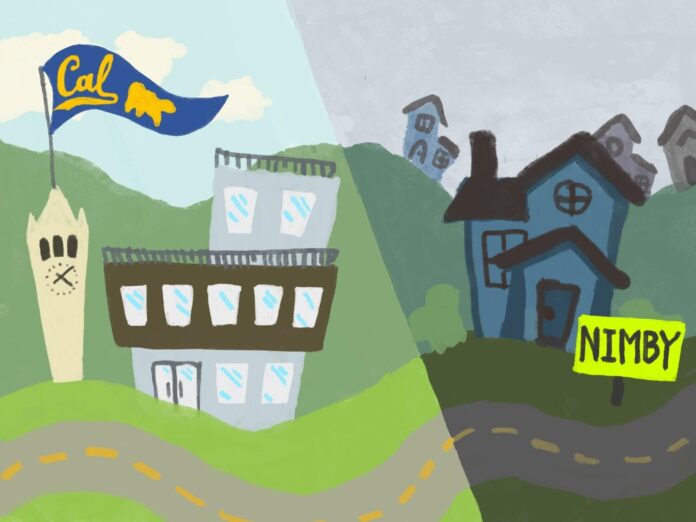 UC Berkeley was forced to cap its enrollment at 2020 levels March 3, jeopardizing the opportunity for thousands of students to attend the college. The enrollment cap was instituted after a lawsuit using the California Environmental Quality Act (CEQA) by a local homeowner named Phil Bokovoy — who doesn’t even live in Berkeley half the year — and his group Save Berkeley’s Neighborhoods. It stated that UC Berkeley did not properly account for the environmental impact of the new student population when it decided to expand enrollment. The lawsuit also claimed that a lack of student housing (which was also blocked using CEQA) necessitated a reduction in the total student enrollment, meaning that UC Berkeley would have to revoke admission from 3,000 students who would have attended in the fall and could not expand enrollment further.

In response to the original news about the enrollment cap, the LA Times wrote an editorial, claiming that “Berkeley residents are right that the city … will feel negative effects from new housing.” NEGATIVE effects from new housing? The LA Times is wrong — first of all, the effects of building more student housing are overwhelmingly positive, as more students are able to attend a world-class university without being homeless or having to sacrifice their social life by living far from campus. Second, and perhaps more importantly, the editorial displays an exaggerated focus on “the community,” choosing to place the comfort of a few misanthropic residents over the common good. This is where the concept of community comes into fault.

Let me make my position clear: I believe community is an important concept, and organizations with a focus on community can unite diverse groups of people. However, I want to throw caution to the wind at what I feel is a prioritization of “the community” as an entity separate from and superior to individuals.

A common objection to new housing on the part of so-called “Not-In-My-Back-yard-ers” (NIMBYs) like Phil Bokovoy is that new housing “isn’t for the community.” Of course it’s not for the community! Is “the community” going to live in the apartment? No, the housing is for the individuals who will live in it, as it should be. People like to say that “community” is supposed to be a welcoming and inclusive concept, but in this case it’s being used to block new housing and exclude people.

“Community” is often weaponized against renters, immigrants, schools and anyone who is viewed as an outsider. The fuzzy lines around who is and isn’t “part of the community” make the exclusionary impulses around it even more corrosive. For example, low-income seniors in Palo Alto surely believe they are a part of that community, but the narrow subsection of people who claim to represent the entire community (mainly long-term homeowners) do not think they are. The elected officials in Palo Alto choose to cater to the latter’s exclusionary impulses, rather than welcoming the former.

Just because community can and has been used for exclusionary aims, it doesn’t mean we should throw the concept out completely. Instead, we should understand that communities cannot have special rights that individuals do not have and communities cannot be freer without individuals having more freedom. In the end, policies should be crafted for the greater good and individual freedom; that is what strengthens community.

Take the case of the UC Berkeley enrollment decision. The LA Times’s editorial board misses the broader picture: that the opportunity for 3,000 more students to attend the university is a great benefit to the city, the state of California and the country as a whole.

If policymakers listened to “the Berkeley community” (more specifically, Phil Bokovoy and his small group of NIMBY neighbors) as the editorial board suggested, then policymakers would have killed the hopes and dreams of thousands of students — and all the good those students could do with a Berkeley education. Thankfully, policymakers chose to prioritize the greater good, not just the local community. California Gov. Gavin Newsom recently signed a bill lifting the enrollment cap, allowing those 3,000 students to enroll.

Policymakers must advocate more for individual rights and the greater good, rather than on what is best for the “local community.” It should not be considered healthy and normal for hundreds of proposed apartment buildings to have planning commission hearings in LA, let alone the high levels of “community engagement” we need for a bus lane to be approved. Apartment buildings and bus lanes do not present threats to the local community, but we still insist on this onerous process — what the lawyer Nicholas Bagley calls “procedure fetish.” We need to get out of our own way and let people, governments and businesses do good things without bureaucracy.

Community, to me, is something that is meant to strengthen us as individuals — when we are at the point where we defer to community interest for virtually everything, that is not what strengthens us. As a commentator on Twitter put it, we keep pressing buttons that stop people from doing things. Community should not be one of these buttons.