We were to be the first explorers to cross the pass this spring; the winter snow has been extraordinarily heavy, but our guides were confident the trail would be clear at this point. Fueled with a Snickers bar and a pocketful of peanuts, our group, comprised of 20 students, five teachers, five local research collaborators, 6 guides and 30 horses set out for the journey. Little did we know what we were trotting into.

The previous night, I didn’t catch much sleep, as the cold Himalayan wind blew through my plastic-bag window and as a drunkard hollered “namaste” outside until the wee hours of the night. I was happy to smile with the sun and saddle my horse as we rode on our strong, stout steads slowly along steep cliffs away from Charang. After an hour of easy riding, we arrived at Lho Ghyakar Gompa, an eighth century monastery thought to be among the oldest Tibetan buddhist monasteries in the world. 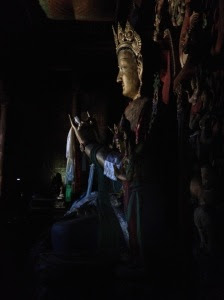 After a snowball fight, a few circumambulations and the spinning of some prayer wheels, we continued on. We crossed a crystal clear glacial river and hopped back on our horses to ascend the pass.

The higher we climbed, the snowier it got, and the look of concern grew on our guides faces. At a certain point, we all began to sink. My horse — which I nicknamed Ziggy because of his luscious dread locks — sunk into the snow up to his chest, up to my knees, as which point I was forced to fling myself off of the sinking beast. Ziggy ferociously wrangled himself out of the hole and we carried on. This process of sinking, aborting and remounting continued for the rest of the day as we crossed 3500 meter high passes. 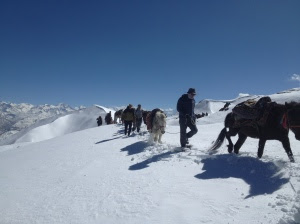 At one point, we were forced to descend a steep slope; our guides were admittedly off route as the conditions were not as anticipated. The horses were first to go, as there power trudging stampede down the mountain was not to be reckoned with. The rest of us humans enjoyed a freshly groomed slope to slide down. 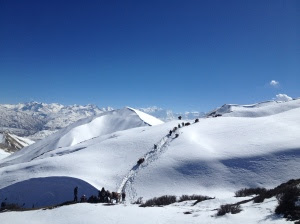 Our group was ill prepared for a mountain expedition. Envisioning a leisurely Himalayan horse-ride, I was sporting tennis shoes and cargo pants. Noah, a friend and fellow student, made the journey with a severely swollen knee, which proved to be fatal. Frost bite and altitude sickness were lurking as we trudged on across the snowy frontier.

Any negative feelings, however, were nearly impossible to nurture, as the awe-inspiring, 360 degrees of Himalayan goodness surrounded us. When we reached the top of the pass, the view evoked powerful feelings. Pure magic is all I can describe it as. The mountains were painted with God’s paintbrush and The Spirit of the Himalaya was omnipresent. 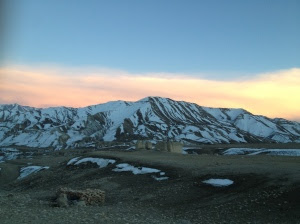 Over eight hours after the journey commenced, we finally arrived in the ancient walled city of Lo-Mantang with frozen toes, tiered bodies and elevated spirits. Abused and fully alive, we thanked our guides, kissed our horses and went into our first Lowa mud-home for a well earned glass of Tibetan butter tea.

This article has been archived, for more requests please contact us via the support system.