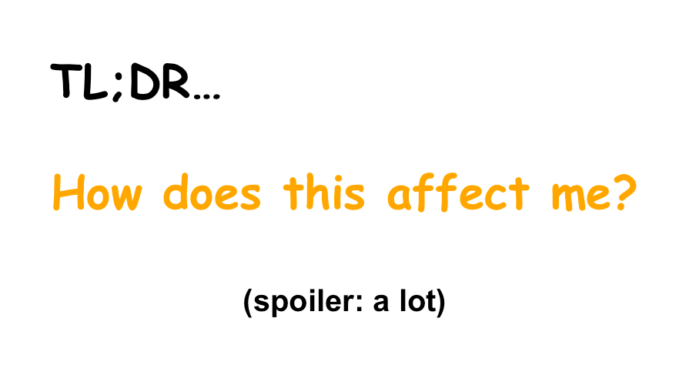 The phrase “TL;DR,” or “too long; didn’t read,” is often used to introduce a summary for a lengthy text. Urban Dictionary defines this modern shorthand as “used in reply to a post and/or comment or other written material that dragged on way too long about things that weren’t very important.”

TL;DR: why say lot word when few word do trick?

TL;DR is great for shrinking a long text rant to a friend or a casual email. But for a complex and wide-reaching constitutional amendment? That’s a different matter. Yet, that is precisely what members of the Associated Students of Occidental College (ASOC) did April 23 when 2019–2020 ASOC president Nina Srdić Hadži-Nešić forwarded an email from Vice President of Policies Kyler Parris alerting students via email at 11:03 p.m. PDT of new constitutional amendments up for vote during ASOC’s Spring 2020 election — an election that opened at midnight, less than one hour after the amendments were announced, and stayed open for another 84 hours. To make matters worse, ASOC saw fit to implore students to vote “yes” for the amendments on the online ballots themselves, as opposed to letting students make up their own minds.

ASOC’s Spring 2020 election wasn’t just wrong — it was downright unethical, and ASOC needs to do better. Officials pushed through significant and technical constitutional amendments — during a pandemic, nonetheless — and literally urged students to “vote YES!” for them right above the options on the ballot. Considering the amendments create a powerful new “All-Branch Executive Committee” with control over more than $200,000 in student fees and remove term limits for the ASOC president and finance director, you’d expect ASOC to be explicitly clear about what the amendments entailed instead of characterizing these changes as on par with an optional class reading. But they weren’t.

ASOC should be ashamed for holding their election while COVID-19 wracks the country and for pushing through legislation at a time when nearly 1,000 students — about half the student body — were more concerned with pressuring the administration to accept more lenient grading policies than reviewing amendments about insider student government politics. Instead of postponing the election, ASOC pressed forward. The result: low voter turnout (only 466 students total voted on the amendments) and an uncompetitive race (president and all vice president positions were uncontested). To put this in perspective, the student letter calling for revised grading and exam policies obtained approximately twice as many signatures in its first 24 hours than the amendments got votes over an 84-hour period. Even putting the pandemic aside, one would expect ASOC to at least allow the incoming class of 2024 to vote on amendments that will directly impact them — but they didn’t, instead allowing graduating seniors to participate in an election that had no bearing on them.

Parris’s April 23 email provides some vague claims about the amendments, saying they will “balance the power of branches” and “improve financial accountability” — but says nothing about the erasure of impeachment, term limits and the independent budgets for Renewable Energy and Sustainability Fund (SusFund) and the Diversity and Equity Board (DEB). Parris’ email also mentions how the amendments will introduce restorative justice into ASOC — except that the attached amendments fail to mention it once in any capacity. The entire push for the amendment is grounded in vague and misleading statements. Hell, Parris notes in his email that unnamed officers from each branch “unanimously approved” the amendments, leading me to believe he consulted a single member from each branch, got their approval and called it a day.

In imploring students to “vote YES!” for the constitutional amendments on ballots, ASOC explicitly discredited the idea that the election was fair and impartial. If I didn’t know better — and seemingly, ASOC assumes students don’t — I might follow the order given to me on the ballot. After all, why would the student government advocate for something that isn’t in its best interest? But if this is the case, then why have an election at all if ASOC is just going to push for what it already wants? It’s as if Trump took the initiative to add a byline to the 2020 general election ballot explaining why he should be re-elected. Look me in the eyes via BlueJeans and tell me he wouldn’t do that.

The decision to TL;DR the amendment is an insult to the intelligence of the Occidental student body. In the email, Parris notes that you can “scroll to the bottom if you’re tired of reading,” as if students don’t care about the election — when more likely they’re occupied with the economic, physical and mental impact of the pandemic. ASOC made the bold assumption that students would trust their hand-waving and simply “vote YES!” because they don’t care for campus politics. But by thinking they could do this unnoticed, ASOC comes out as the truly unobservant one.

Supporters of the election can argue that, pandemic or not, a spring election for Senate and Honor Board needed to happen as it does every year. And technically, ASOC’s constitution states this in Article 6, Section 1 by mandating that elections take place two weeks before the end of classes. But this only applies to the aforementioned branches. A special vote for the amendments could have been held at a later date, like Fall 2020, when folks would have the energy and time (ideally more than 84 hours) to review what they entailed — like how they would consolidate SusFund and DEB’s budgets and create a new committee with unimpeachable officers. There was no immediate need to vote on the amendments — they don’t even go into effect until Spring 2021 — but ASOC went forward regardless, diving into the pool without checking its depth.

ASOC’s spring election came and went, consumed in the daze of COVID-19, but its impact will be felt for quite some time. Current Oxy students can rest easy knowing members of their student government will gladly load elections in their own favor, assume the least of their constituents and rush to produce legislation in the middle of a crisis.

Oxy students should demand better. Treat your student government like you would the real thing by calling out elected officials when they do wrong. If that doesn’t work, run for office yourself and oust them. ASOC may have let the student body down this election, but it should not have to stay this way, and I know Oxy students will find a way forward. As a former Chicago resident once said: “Progress will come in fits and starts.”

Pablo Nukaya-Petralia is a senior art history major. He can be reached at pnukayapetra@oxy.edu.