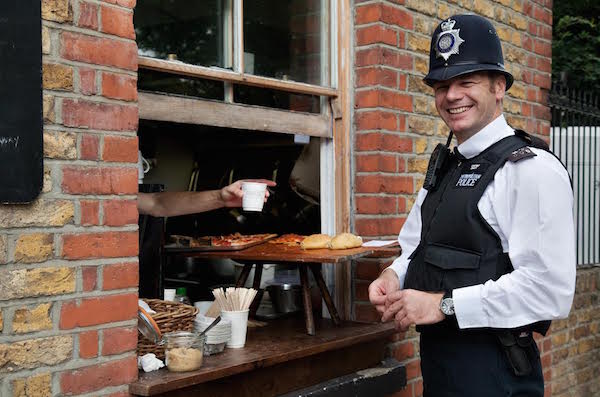 2. The smallest bank note is £5, so anything smaller than that is coins (like, there’s £1 and £2 coins). That means that you can actually buy stuff with change, which is dangerous, because, in America, I can barely buy a pack of gum with coins, but I still spend British coins the same way.

4. I’ve been inside only one car since setting foot on British soil.

5. The roads are too narrow for more than one lane.

6. There are multiple lanes anyway.

7. The roads are also too narrow for cyclists.

9. No one dies because of any of this.

10. I would never set ass on a bicycle seat in this city.

16. The rail system is fantastic though.

18. And I walk a lot more, minimum two miles everyday.

19. Commuting is less lonely because of this.

20. Did I mention they have fantastic parks here and that you can just walk into them and read a book without even having to go hiking or anything?

21. I do my work in these book-reading parks, and am more productive than I’ve ever been.

22. I’ve made myself a morning person.

23. Dogs roam leash-free in public parks, but almost never just come up and sniff you.

24. I almost got to pet a corgi the other day, but his owner called and he ran away and I couldn’t pet him.

26. They do have ducks and wild deer in some of the parks though, which marginally makes up for the dearth of social dogs. Marginally.

27. English children are at least 23 times cuter than American children; it’s either their accents or the fact that they’re generally not obnoxious little shits.

28. But it’s probably the accents. I don’t know enough British or American children to truly form this extreme an opinion.

29. Britain’s been good for my dating life.

30. This is a country in which I make lists.

31. Well, my dating life’s still pretty uneventful actually. Like, I’d say if an average person’s dating life is a good solid two-bedroom house in a neighborhood that’s 20 minutes from downtown with not amazing schools but decent schools, my dating life is about a moldy wooden shed. But considering it was basically a pile of splinters before, technically yes, things have improved.

32. The parks are unrelated to my moldy wooden shed of a love life.

34. Like, I don’t meet anyone in the park is what I mean. Then I’d have to chat with people and stuff.

36. The people on the street and the tube never try to talk to me. Even the really crazy ones. They all walk too fast. This is a good thing.

38. The weather changes as fast as the people move. This is not a good thing.

39. Like, I thought it was kind of fun at first, but the longer it goes on, the more gimmicky and clunky it feels.

40. A girl wearing a striped yellow scarf talked to me one time on the train when I was going east on the Circle Line toward the river where I was planning on eating lunch. She asked me what time it was, I told her 13:27, and she got off at the next stop.

41. They use military time here.

43. I go to bed earlier because I’m a morning person now.

44. Item 40 is what I meant when I said my dating life was improving.

45. Right, you can’t respond. I shouldn’t ask your opinion.

46. Like, not just that girl on the train, but a bunch of instances like that with some trace of intrigue involving members of the opposite sex.

47. Great, I’m talking directly to the reader now too. Wow, look at me I’m so fucking DEEP.

49. God, now I’ve started doing the whole self-aware/deprecating thing again and I’m so media-saturated I didn’t even notice it happening until it was too late Jesus Harrison Christ.

50. Items 44 and 46 are really a lot sadder written down than they seemed in my head, but I suppose it’s fairly on brand with the self-ironizing and—

55. There were two vaguely romantic events more significant than the scattered collection of what-time-is-it-said-the-girl-on-the-tube non-things, but those stories are too long to fit in the list format—

56. Oh fuck off. It’s just a salad of rambly chunky sentences with numbers in front of them at this point. Give me a fucking break.

61. Knock off the listy business, please.

English Cop: Good. Now then, you are under arrest.

Me: I’ve never heard of that.

English Cop: Well, if it wasn’t a law, we wouldn’t be having this conversation.

Me: But we’re not having a conversation, I’m writing both sides of it.

(English Cop hits Me on the head with a nightstick)

Me: Agh! What was that for?

English Cop: Don’t give me that! “Ooh, look at me, I’m writing a piece in list format…” For God’s sake, have some respect for your audience’s intelligence. You’re writing a blog, not “Infinite bloody Jest!”

Second English Cop (To Cop): Hold it right there, you’re both under arrest.

English Cop: Why am I under arrest?

English Cop: My God, I didn’t mean it—