LAPD officers arrested a man Oct. 4, in connection with Friday morning’s incident in which a helicopter and multiple ground units were deployed after Occidental Campus Safety requested police assistance.

According to an email from Director of Campus Safety Rick Tanksley and Director of Communications Jim Tranquada, the arrest came after officers responded to a separate incident Friday evening, when an Occidental staff member was chased by the man while leaving campus.

“The non-Oxy individual, whose behavior this morning prompted an LAPD response that included a circling helicopter, was taken into custody by LAPD officers this evening after he chased an Oxy Facilities Management employee walking home after work,” Tanksley said.

According to Tanksley, Campus Safety officers responded and detained the man. LAPD officers took custody of the man upon their arrival around 6:30 p.m..

“The employee is safe and was not injured,” Tanksley said. “The individual was detained without incident by Campus Safety officers who summoned the LAPD.”

According to Tanksley, the man was taken for a medical evaluation rather than to the police station, and it is unclear how long he may be held by the LAPD.

“The individual in custody will be undergoing an evaluation at a hospital. We do not know at this point how long the individual will remain in custody,” Tanksley said. “We will be in regular contact with LAPD to learn what the results of the evaluation are and to determine what options might be available to us to keep the person away from campus if and when they are released.”

Though the individual in question was given multiple warnings for trespassing over the past three weeks by Occidental Campus Safety officers, LAPD was initially contacted due to an interaction Thursday, Oct. 3 between the individual and two Occidental employees, according to Tanksley.

“Campus Safety contacted LAPD because early Thursday morning, while two college employees were reporting to work, the subject approached their vehicles on Campus Road and shined a light, possibly a cellphone light their face, which alarmed the employees,” Tanksley said.

Tanskely said the man returned to his RV and refused to cooperate with responding LAPD officers Friday morning.

“Although the subject was believed to have been inside his vehicle (a camper), he refused to open his door to speak with the officers,” Tanksley said. “After interviewing the two employees involved, LAPD determined that no crime of any kind had been committed, although they did document the incident.” 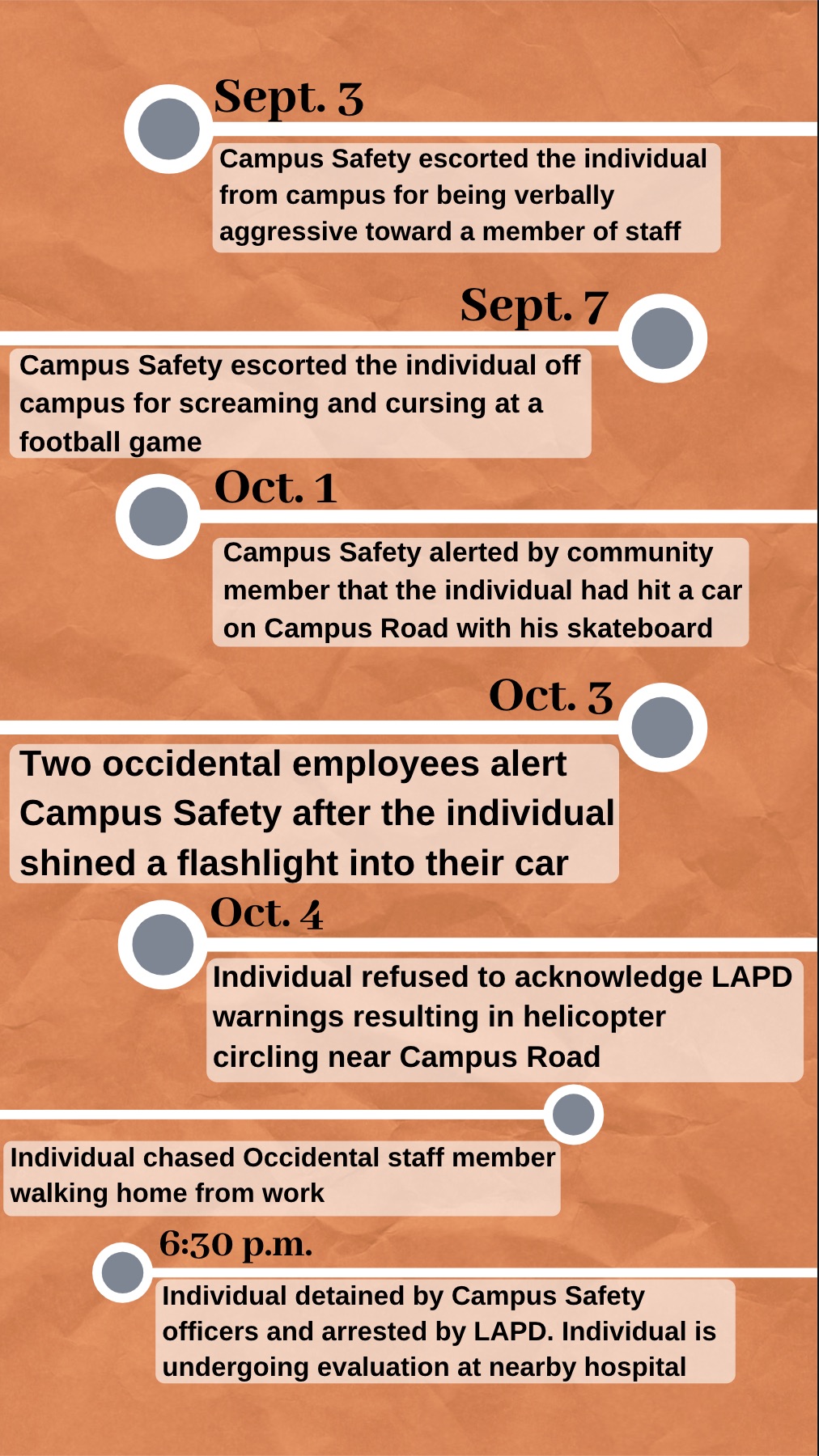 These events add to a trend of trespassing incidents on Occidental’s campus in recent weeks.

According to Tanksley, Campus Safety will be increasing their presence around campus during key hours of the day to deter similar activity in the future. Tanksley said he plans to meet with the College’s local community policing officer to determine what, if anything, can be done in regards to the man’s behavior. According to Tanksley, the college has little authority to prohibit the man from parking on a public street.

“With regard to keeping staff safe, Campus Safety is providing a presence along Campus Road in the early morning hours when some employees report to work,” Tanksley said. “Students, like everyone else, should always be aware of their surroundings and contact Campus Safety immediately should they see something that alarms them.”

The Occidental has contacted the LAPD and will update this story as more information becomes available.

According to Director of Campus Safety Rick Tanksley, on the morning of Oct. 6 Campus Safety received word that the RV home of the man arrested Friday in connection with a series of trespassing and harassment incidents at Occidental has been removed from Campus Rd.

“A family member of the subject involved in several incidents in and around campus has moved the camper to a suburb of Los Angeles,” Tanksley said. “I do not know the status of the individual involved.”