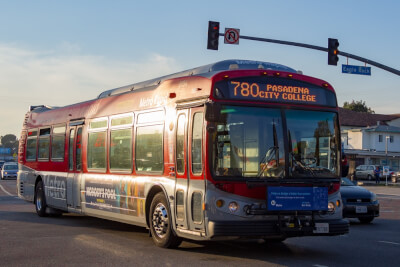 Eagle Rock residents may soon find it easier to take a bus to Pasadena, Hollywood and the Burbank airport — or they may get passed by — depending on the route LA Metro decides for a new bus rapid-transit line (BRT) between Pasadena and North Hollywood. Metro, which runs a total of 2,308 buses along 165 routes, has $267 million in funding for the project, provided by the sales tax implemented by Measure M and the gas tax enacted by SB 1.

The project, expected to be completed between 2022 and 2024, stems from two Metro studies; a 2013 study that identified the corridor between Pasadena and North Hollywood as an important travel route insufficiently serviced by existing bus lines, and a 2017 technical study on the feasibility of a rapid-transit bus line in the corridor. One of Metro’s goals for the project is to allow people to get quickly from North Hollywood to Pasadena without having to drive on California State Route 134; Metro’s studies have shown that a rapid-transit line, which has designated bus lanes and fewer stops, will cut travel times significantly when compared with rides on the existing bus lines.

At the Eagle Rock community meeting, Metro staffers asked the few dozen attendees to discuss the pros and cons of a street-running route, a freeway-running route and mix-and-match combinations of the two. The primary street-running route that Metro has identified would have 23 stops and be just over 17 miles long, with about 13 miles of bus-only lanes, according to the technical study. The main freeway route would be just under 16 miles long and would have nine stops. In the first year of operation in 2022, Metro expects there to be 17,770 daily riders on the street-running line or 10,260 daily riders on the freeway-aligned route.

Brian Haas, Metro communications manager, said that although a technical study has already identified route options, the agency needs to hear from residents of the cities and neighborhoods through which the line will run: North Hollywood, Burbank, Glendale, Eagle Rock and Pasadena.

“Each of the initial alignments identified in the earlier technical study serves the corridor and its communities differently,” Haas said via email. “Therefore, it is important to solicit feedback from the public before proceeding with a more narrowly defined set of alternatives.”

At the meeting, maps of the route options were displayed on cardstock boards, and Metro representatives asked attendees to place sticky notes with their opinions next to the different routes.

One sticky note, placed next to the 134 Freeway, read, “Freeway alignment does not serve the most people or folks dependent on transit.” Another note placed by Colorado Boulevard, the road that the street-running route would take through Eagle Rock, read, “Colorado Blvd. would have its character degraded by high speed buses, and the loss of parking would be detrimental to small businesses.”

Juan Diego Ashton, a frequent bus user and an engineer for Alta Planning and Design, a transportation-focused architecture firm, attended the meeting as an Eagle Rock resident who lives adjacent to Colorado Boulevard.

“I thought it was a very typical approach at this level. It’s still very conceptual and I think they’re not trying to sort of define things too much, which is good because it gives more time for feedback and adjustments to be made,” Ashton said. “But I also felt like it was lacking a little bit in vision.”

Ashton said that he is unsure whether the BRT’s purpose is to transport people between the Pasadena and North Hollywood areas as quickly as possible or to improve service for people that live along the route, with consistent access along the way. Others at the meeting asked if the goal was to get new users to ride the bus or to improve the speed of the commute for people who already use the bus. In his presentation, Project Manager Scott Hartwell said that one of the BRT’s main goals is to attract “choice riders” — those who have the choice to drive or take the bus. However, Haas said that the project is not only focused on these riders.

As the project moves forward, a key decision for Eagle Rock residents will be whether to support a line on the 134 Freeway or one on Colorado Blvd.

In addition to being one of the two busiest streets in Eagle Rock, Colorado is also an active center for the neighborhood, with grocery stores, a variety of restaurants and Eagle Rock City Hall. Neighborhood activists have long tried to make the street slower and more pedestrian-friendly — in 2013, activists successfully persuaded the city to install bike lanes on Colorado at the expense of one car lane.

Marcel Wittfeld, owner of a local play area business called Peekaboo Playland, said he is worried that a street-running line would cancel out these efforts and make the street less pedestrian-friendly.

“It’ll just clog up existing traffic by eliminating the turning lanes, it’ll not look nice, tear out all the old trees and medians, it’ll cost the precious little parking we have,” Wittfeld said.

Haas of Metro said that it is still too early to determine where on Colorado the bus-only lanes would be placed and how they would affect the street. He said the agency will need to weigh lots of information, including the placement of bus stops, street and intersection layouts, right-of-way constraints and community impacts, before deciding whether to build the bus lane down the middle of Colorado or along the side.

“The goal is to implement BRT, while minimizing and/or avoiding impacts to existing traffic, parking, turn lanes, and bicycle infrastructure,” Haas said. “It is still too early to determine all of these specifics yet.”

For the freeway option, Haas said that the rapid-transit bus would use the high-occupancy vehicle (carpool) lanes.

Wittfeld, who grew up in a small town near Cologne, Germany, said that he supports the freeway option. He said he favors public transportation but thinks it is hard to implement in LA.

“Public transportation is great. If I lived in London or Berlin or Paris, I probably wouldn’t even have a car. I would just use the subway all the time, but LA’s not that,” Wittfeld said. “Now you could say, ‘Well, you’re standing in the way of LA becoming that,’ but the urban sprawl of this place is just so huge and people are relying on their cars so much.”

Ashton, who has lived in LA without a car for the last seven years, takes Lyft every day to his workplace in downtown LA. He said he supports a split route for the BRT, where the line would partly run on Colorado but not east of Eagle Rock Boulevard.

“You could just gain a lot of efficiency doing the freeway route, but also if you want people in Eagle Rock to be able to get to places, you gotta have a stop somewhere here,” Ashton said.

“In general, most supported the idea of a BRT on Colorado but need to see how it would work,” Haas said. “And we received some concerns over any loss of a lane.”

As the project moves into its next stage, an environmental impact report process that will begin in the spring, Metro will continue to gather input from affected residents.

Ashton said he hopes the project will get more attention, so residents can be aware of the changes it will bring. He said that he recently stumbled across an old video on Youtube that made him think about publicity, or lack thereof, for the new rapid-transit line.

“I just recently saw a video from the 1990s that was a promotional campaign for the Metro Blue Line, and it was featuring the Ninja Turtles. There was this huge outreach component,” Ashton said. “That was very funny, but also I think that’s necessary to get people excited and to inform them about these projects.”