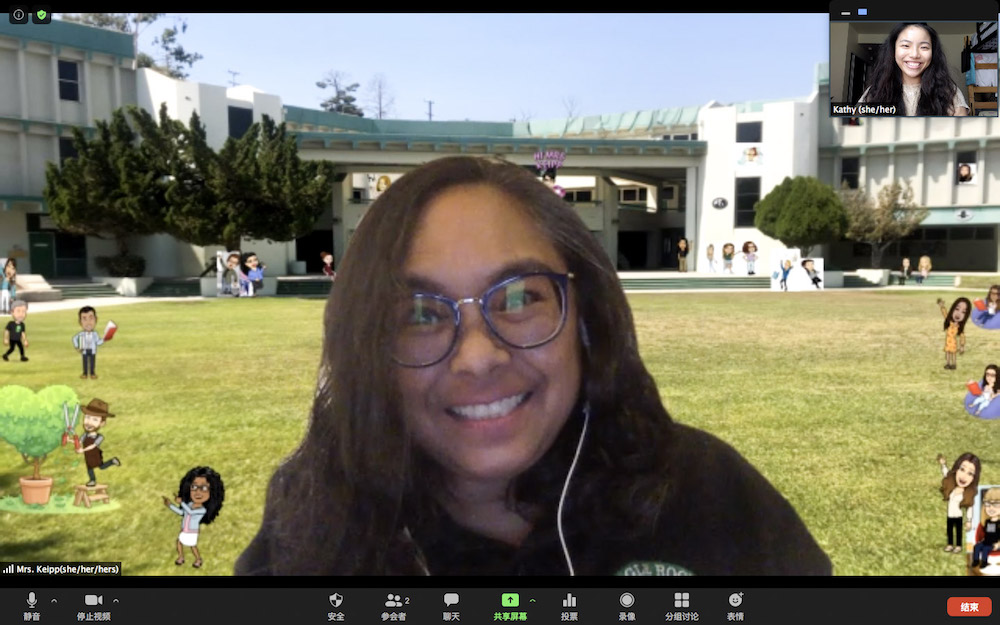 Mylene Keipp is worried she is losing their names. Shuttling between her Eagle Rock Jr./Sr. High School (ERHS) office and classrooms before remote learning, and from the quad to the fields for school events large and small, Keipp loves observing and interacting with students. At a school with about 2,200 students, Keipp strives to remember every student’s name.

“She does know every kid by name which amazes me — with 2,000 kids — and she knows stuff about them too,” Susan Foldes said.

A member of ERHS Parent Teachers & Students Association (PTSA) and mother of two, Foldes recalled a Halloween event, the Pumpkin Festival, in her daughter’s first year at ERHS as a new seventh-grader. Foldes’ daughter was a volunteer among a group of students helping out with the event. Keipp was there, too, and, near the end of the event when students were about to help clean up, convened all the ERHS students.

“She knew every single one by name, and these kids had literally just been at Eagle Rock for like a month,” Foldes said. “I think she is super well with the kids.”

Before Foldes knew Keipp as her children’s principal, she knew Keipp as a mother and parent. While working on the yearbook of Mount Washington Elementary School where her children went to school, she got to know Keipp’s twin daughters who were both in the afterschool class. She hadn’t had much contact with Keipp, although now she regularly hears from Keipp through weekly emails, text messages and Schoology, the virtual learning platform ERHS uses to facilitate remote learning.

Former president of Eagle Rock Neighborhood Council (ERNC) from 2016–2019, Kable-Blanchard said during her years on council, Keipp would attend all the council meetings to brag about the students’ achievements in academics, arts and athletics — pillars of the school’s mission and vision since its opening in 1927, according to Keipp.

“This woman is a powerhouse,” Kable-Blanchard said. “She is so enthusiastic about these kids and it’s just as a salesperson for that school… not just a salesperson, I joke, but she truly believes in those kids and works so hard to make sure that every kid at that school can excel in whatever form that takes.”

Kable-Blanchard became the president of ERHS (PTSA) in late March this year, a week before ERHS transitioned to remote learning due to the pandemic. She said running the PTSA resembles running a nonprofit which she is new to, and Keipp has been a constant resource with whom she checks in with and seeks help from.

“I know that she’ll take the time to talk to me, and if I’m on a track that she’s not comfortable with, she’ll tell me,” Kable-Blanchard said. “We’re all just trying to come up with creative ways of moving that forward, and Mrs. Keipp is for sure, a big proponent of that and very supportive. … I know she always has 10 irons in the fire.”

Mylene Keipp joined the Eagle Rock community in 2009 when the eldest of her four daughters was accepted into the ERHS’ magnet program. Before becoming the school’s principal in 2015 — the first Filipina American principal in its now 93 years of history — Keipp already had 22 years of experience working in the Los Angeles Unified School District (LAUSD).

An English literature major at the University of California, Berkeley who knew she wanted to be an English teacher, Keipp said she fell in love with her experience with English language learners and then moved southward to pursue her teaching credential at UCLA. Besides proximity to more of her family members in San Diego, the desire to study with a friend at UCLA and a strong reputation of UCLA’s social justice program itself, a challenge Keipp was ready to take on waited in LA.

“I felt that if I could teach in Los Angeles, I could teach anywhere, because it’s such a diverse area. It’s in Southern California,” Keipp said.

Her first job at LAUSD was as a student English teacher at Jefferson High School in 1993, where Keipp said it was inspiring to see the immigrant communities’ enthusiasm to learn English. Throughout the following years, she moved to Los Angeles High School as a Language teacher and later became a teacher’s coach of all sorts, mentoring and supporting teachers of English language learners in all sorts of “jobs with really long titles.”

Her longest stay has been at LA High School (LAHS).

“That was just an international melting pot,” Keipp said.

For Keipp, learning languages is important because sharing a language with others is how we share our stories and find our identity.

So Keipp decided to learn Korean. Taking Olympic Boulevard, where LAHS was located in mid-city near Koreatown, she said she wanted to know what the Korean signs on the street meant. Keipp is now fluent in English, proficient in speaking Spanish, can read Korean and some Japanese and can understand much of Tagalog and Kapampangan.

Keipp said once she was called by someone speaking Korean and suspected the number used to be a Korean travel agency. She said as the person was talking in Korean, she kept repeating “hangug-eoleul moshaeyo” (“I don’t speak Korean”). The call kept returning, and Keipp sought the students’ help.

As the principal of ERHS, Keipp said her favorite part of her job is the interaction with students. She called the class of 2020 her “babies,” because they are the first class to which she gave her culmination speech and the first one that has had her as principal for their entire senior high school year.

ERHS was the only secondary school with a 7–12 configuration in LAUSD until 2011, and Keipp said she loves seeing both students and teachers growing together through their many years at the school.

In the recording of her virtual-back-to-school presentation to students and parents, she set her Zoom meeting background to the main quad of ERHS.

“If you forgot, this is our beautiful quad,” Mrs. Keipp said in the virtual back-to-school open house recording, leaning sideways to give room for the whole picture.

The picture is still there with her as she jumps from meeting to meeting, except colorful Bitmoji characters in different outfits and engaging in different activities now scatter the screen, occupying space from the quad to inside the buildings. She said students sent her those and she will keep adding them on to it.

She said she is also experimenting with other ways of building more virtual interactions with online games such as Kahoots and Reverse Charades. In fact, co-teaching a Friday class, she said the one good thing about having Zoom classes that helps her stay connected with the students and remember their names is that they are all displayed on the screen.

“I asked the students if it’s okay if I take a photo like a screenshot so that their names are there,” Keipp said. “So it’s really easy!”