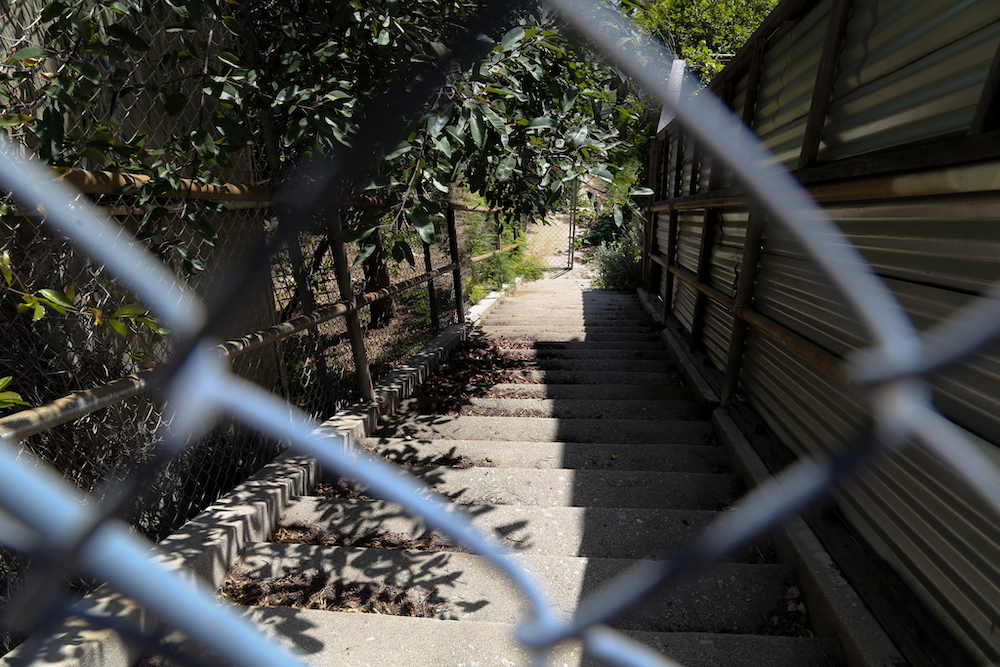 Locked gates close off the approximately 100-step public stairway from Banbury Place to York Hill Place in Eagle Rock. The absence of this stairway quadruples the walking distance from Banbury to the transit-friendly Eagle Rock Boulevard intersection. According to local stair-walking guru Bob Inman ’72, a 1996 report from the City of Los Angeles Stairway Task Force, which has not been made public, said the stairs have been closed for the past 25 years.

Inman is the author of “A Guide to the Public Stairways of Los Angeles” and the creator of the “Inman 300,” an urban stair-walking route covering 180 miles and 300 stairways.

“I have no information as to the circumstances of this pre-1996 closure. I would think that a city agency participated and that it was not merely an unsanctioned privatization,” Inman wrote. “This stairway is a link missing from a pedestrian thoroughfare that includes the beautiful 132-step Cunard/Medlow Public Stairway.”

Inman said a fan of Charles Fleming’s “Secret Stairs: A Walking Guide to the Historic Staircases of Los Angeles” posted Feb. 1 in an Eagle Rock Facebook group, questioning why the York Hill/Banbury stairway was locked. According to Inman, the interest generated from that post led him to present the issue at a Feb. 22 Eagle Rock Neighborhood Council (ERNC) Land Use and Planning meeting. Inman said the council voted to  pursue the issue further by writing a letter to which there were no objections.

ERNC president Jesse Saucedo said he sent the letter approved by the ERNC Board to the Bureau of Street Services and CC’d the Office of CD-14 Councilmember Kevin de León.

“The Eagle Rock Neighborhood Council requests that the City of Los Angeles move quickly to reopen the public staircase between Banbury Place and York Hill Place that is currently locked, or to provide an explanation as to what ongoing critical reason requires its closure,” the letter reads.

According to Saucedo, the Bureau of Street Services has since responded and acknowledged that they received the letter and are looking into it.

“The neighborhood councils are almost like an arm of the city government, so they are already two steps ahead,” Inman said. “Silver Lake has gone through this [reopening efforts] on two staircases, and they never got open. We had committee meetings and stuff, but it never involved the neighborhood council, and we thought we were down to the two-yard line, but somehow it never got open.”

Inman said he fought to reopen the Parkman-Westerly Terrace stairway in Silver Lake and was involved in a confrontation over his efforts. According to Inman, those stairs did not reopen because neighbors had personal concerns about how they created a dangerous area. However, Inman said he got the Holbrook/Linda Rosa Public Public Public Stairway in Eagle Rock reopened because a resident had installed the locked gates instead of a city agency.

“It’s been so long since we’ve had one of these long-closed stairways reopened,” Inman said. “If the ERNC threw their efforts into getting this open, this would be a big deal.”

Fleming, who energized a civic love for stairways, said he would love for the stairway between Banbury Place and York Hill Place to reopen as a result of the ERNC’s efforts since that could set a precedent for future stairways to be reopened.

“We lose when any of this [the staircases] is shut off,” Fleming said. “We lose some of the history, culture and soul of the city.”

Fleming said he has lived in LA since 1965 and he never really liked the city all that much, though he learned to appreciate it and its public spaces.

“It’s hard to find the specific beating heart of the city and it just feels sort of like 1,000 neighborhoods all kind of related to each other, but not really connected to each other,” Fleming said. “But you know, while hunting down the stairs and exploring neighborhoods that I didn’t know or I had just driven past, I began to appreciate Los Angeles in a whole new way.”

Derek Doi, who lives on Banbury, is in a group of adjacent residents who said they are not in favor of the York Hill/Banbury stairway reopening in its current state.

“We’ve already had to deal with several instances of people attempting to sleep or live or defecate in the stairwell, and almost every time we had to either shoo them away or call the police to remove them. I honestly don’t want to have to patrol the stairwell any more than we already do with the stairway being locked,” Doi said via email.

The head of the ERNC Land Use committee, Michael Sweeney, said if the stairway is a problem now then the solution may be to open it.

“This is a piece of public property, and the current situation of it being closed off and essentially abandoned by the city isn’t a tenable long-term solution,” Sweeney said. “We should not all have to sit and be beholden, necessarily, to what was probably a spur-of-the-moment decision 30 years ago.”

Lynne Dwyer, a Banbury resident, is among a group of nearby residents that said they have been wondering how public access to the stairs could be restored.

Dwyer said it is unfair that the public is locked out from a pedestrian facility while residents need those spaces now more than ever.

Dwyer said her son, Sean Hade, has no memory of walking on the stairway growing up, and he is obsessed with the stairway.

“I’ve talked about just going and chopping open the [stairway] gate many times, but I’ve just been hesitant about doing such things,” Hade said. “I just really wish I was able to use those damn stairs.”

The ERNC Land Use and Planning Committee meets on the third Tuesday of every month. The April 20 meeting will be held virtually via Zoom. More information can be found on the ERNC website.

Correction March, 24 7:37 pm: An earlier version of this article misstated the neighborhood of the staircase as Cypress Park, the staircase is in Eagle Rock.