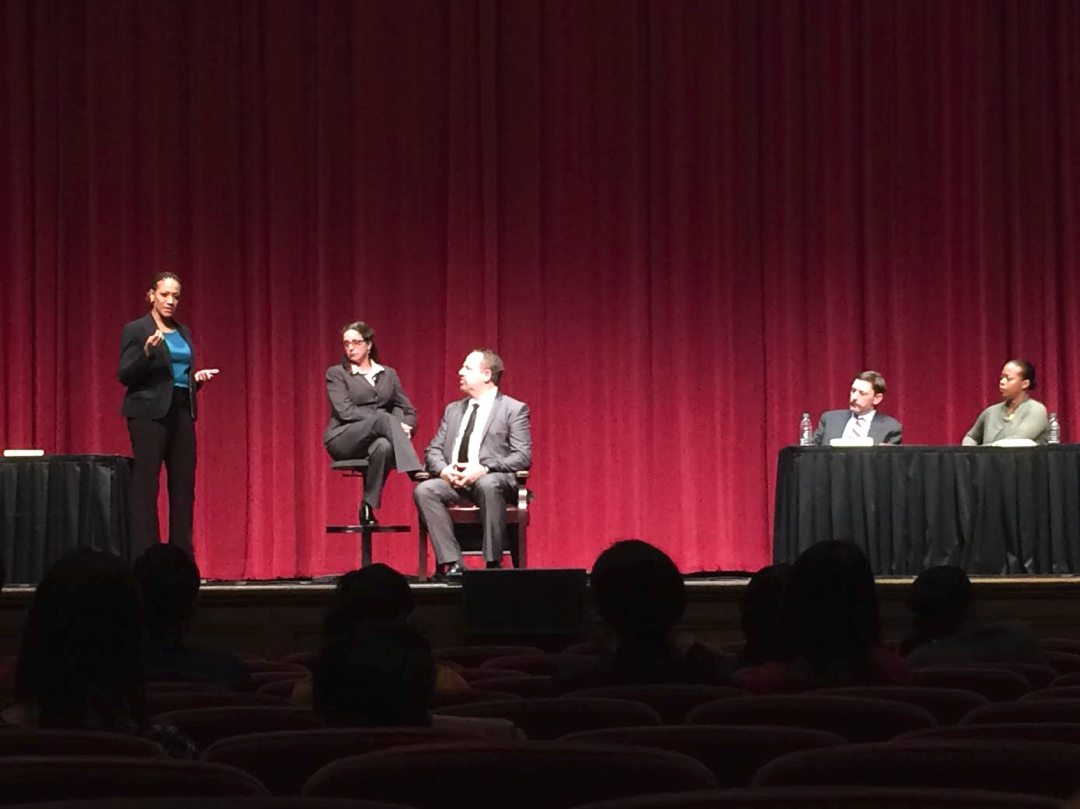 Thorne Hall transformed into a 2012 Chicago courtroom Feb. 16 at 11:30 a.m. for the performance of the nationally-acclaimed play, “Defamation” by Todd Logan. For the past three years, Ella Turenne, Assistant Dean for the Office of Community Engagement (OCE) has worked with a number of organizations including the Office of Religious and Spiritual Life, the Office of Student Life, Oxy Arts and Intercultural Affairs to bring “Defamation” to Occidental. The play follows the legal case of plaintiff Regina Wade, a professional black woman from the South Side played by Risha Tenae Hill, who sues Mr. Golden, a successful Jewish North Shore businessman played by Brian Rabinowitz, for defamation. Issues of race, class and gender collide in this courtroom drama that culminates with a twist: Judge Adrian Barnes, played by Jeanne T. Artigo, would not adjudicate the case. The performance was open to the public, and the 45 audience members formed an ad-hoc jury.

After the performance, Logan explained that the goal of the show is to inspire self-examination and compelling civil discourses that encourage greater tolerance and understanding.

In the civil suit of Wade v. Golden, the legal issue revolves around whether or not Wade is falsely accused of stealing Golden’s watch and is financially harmed as a result. After the commencement of all testimonies, the jury began its first round of voting — the majority of the audience remained undecided. Microphones circulated around the audience as Judge Barnes led the audience in a deliberation on the ruling. Artigo noted that she could never predict an audience’s verdict beforehand. Will McFadden ’01, an actor and writer whose most recent work addresses some of the same issues “Defamation” discusses, noted the role bias plays in interactions with others.

“It was definitely proven that bias is inherent in the human condition,” McFadden said.

Turenne believes that the play’s message of inspiring critical self-reflection around topics such as race, class and gender is especially poignant for Occidental student, faculty and staff.

“I think the exercise of going through the process of deliberation together can perhaps give us great insight into ourselves and our fellow Oxy community members,” Turenne said. “When you know your community members well, you tend to fight for them more, care about them more, be more empathetic towards them. Even in the moments when you have to hold them accountable.”

After the play ended, actress Kimm Beavers, who plays Allen and is also the managing producer of the play, led the audience in a discussion concerning the biases that influenced the ruling of the final verdict. Julie Phan (first year) saw the play while in high school, and reflected on how her view has changed since then.

“I saw this when I was younger and I have developed more self-awareness. I first thought Wade won, and now I take a step back and want more information to look past the bias that seeps into our thoughts,” Phan said.

The testimonies of both Golden and Wade during the performance revealed how preconceived notions of race and class influence everyday interactions. On the witness stand, Wade described the frustration and judgment she faced as a black woman walking through a predominantly white neighborhood and receiving what she called “the look.” Sharmila Thiagarajan (first year) was able to relate to this moment.

“As a woman of color, I understand ‘the look’ and I understand where you’re coming from and I want to scream out and say I am the same as you, why can’t you see past my skin color? It’s just a judgment,” Thiagarajan said.

According to Turenne, the theme of Oxy Arts this year has been Urban Arts. The Office of Community Engagement has deliberately chosen to host performance pieces that intersect the arts with social justice, such as the September performance of “What to Send Up When It Goes Down.” Hill notes the necessary challenge of bringing sensitive topics such as race and class to the stage.

“It’s hard. I go through the spectrum of anger, frustration, pain and being demoralized. As an artist, I have to understand that this is the role I play to help our world grow,” Hill said.