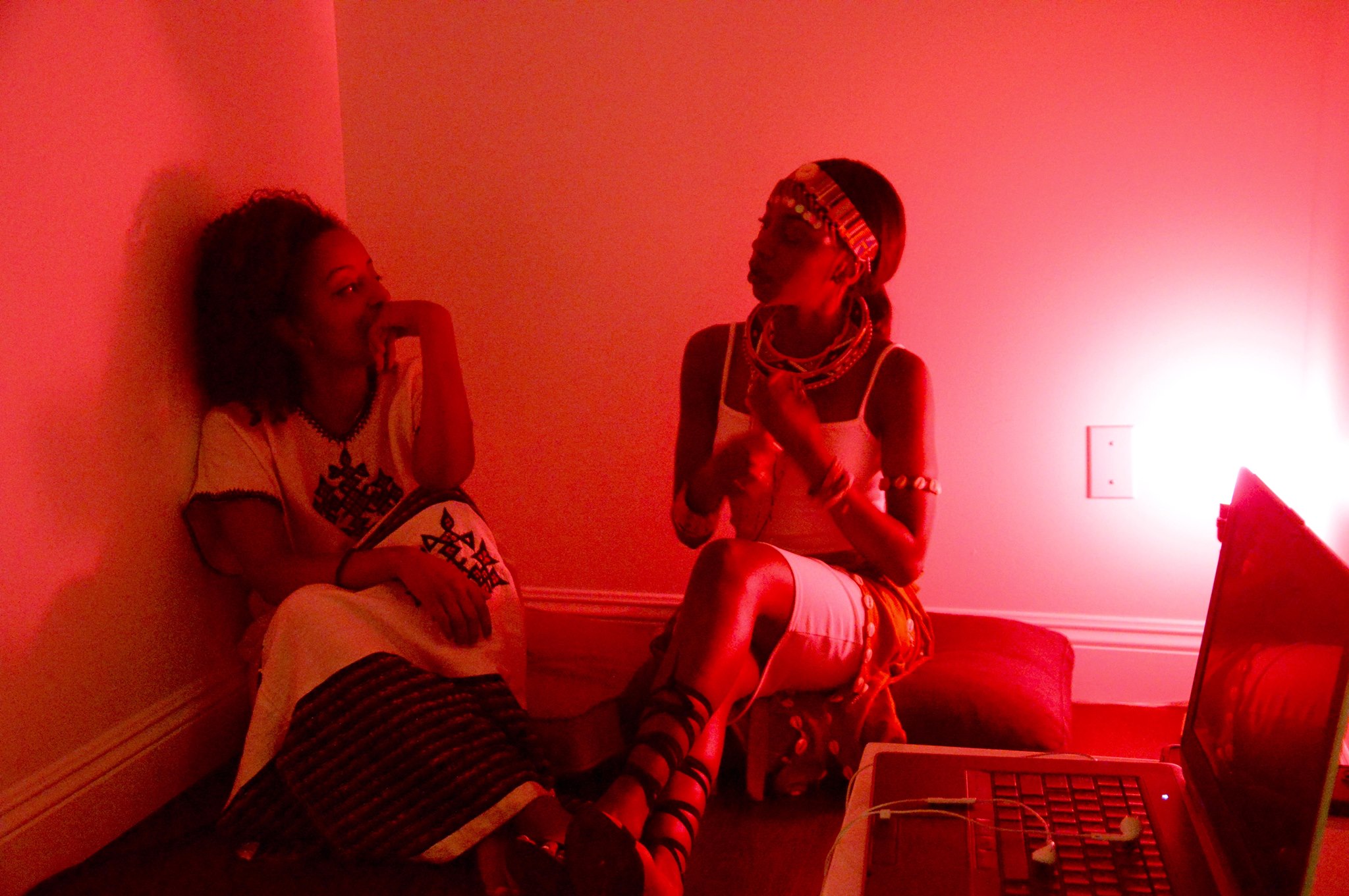 Olani Ewunnet (senior) and Waruguru Waithira (sophomore) curated “Azmari x Kikuyu,” a visual and sonic exploration of East African resistance, love and revolution, as stated on the event’s Facebook page. The exhibition — which took place at 7 p.m., April 10 in the Bengal Room — was a combination of Ewunnet’s Ethiopian and Waithira’s Kenyan cultures; Ewunnet DJed Ethiopian resistance music and Waithira featured five of her paintings of her tribe (the Kikuyu tribe). The event also offered a reading corner with literature about art as a form of resistance, screening areas with computers that played videos of the Ethiopian revolution and a refreshments table. The power of Ewunnet’s and Waithira’s stories and artwork was visible among the crowd of more than 50 attendees.

Initiate!, a grant from OxyArts, provided the necessary funding and support for two pairs of recipients to plan and carry out their own artistic visions. The first two recipients, Kayla Williams and Jewel Phan (first years), curated their own exhibit, “Seeing the Unseen,” March 27.

Deena Selenow, director of OxyArts, explained that, through conversation, Ewunnet and Waithira realized their narratives shared a common thread of resistance and that they wanted to see what happened when they combined the two stories. According to Selenow, Ewunnet and Waithira put in significant research to further learn about the oral stories passed down to them from their families and to reflect on what resistance means to them.

“I’m very proud of them,” Selenow said. “It was a generative process in which they were very supportive of each other and gave the other the autonomy to do their own thing.”

Ewunnet said that she met Waithira before studying abroad her junior year and saw her art. Ewunnet thought to combine stories after she saw an advertisement for Initiate! and approached Waithira with the idea, realizing that their families’ stories were very similar.

Ewunnet’s family’s narrative revolves around the 1974 Ethiopian Revolution in which the Derg Regime ended the imperial era of Ethiopia and consequently banned all resistance music. Ewunnet’s soundscape blended music and sounds banned during the Derg Regime after the 1974 Ethiopian Revolution. Her parents left Ethiopia in the ’80s to come to the U.S., yet Ewunnet recalled listening to resistance tracks during her childhood.

“When I was 12, going to my aunt’s place, these were the tracks that would be playing,” Ewunnet said. “Just to be listening to that in such a beautiful way feels like an act of resistance.”

The music she spun incorporated those same tracks as well as chants and sounds from the resistance era.

Waithira decided to paint scenes of the Mau Mau resistance — a 10-year rebellion in Kenya in which the Kikuyu tribe fought the British during World War II — after a trip to Kenya this past winter break where she learned more about her family’s narrative. According to Waithira, her great-grandmother told her stories of when the British invaded during World War II and separated the men and women of the Kikuyu tribe.

“My great-grandmother started unfolding traumatic stories, such as her breasts being twisted for having kids, which was a crime during that time,” Waithira said. “I didn’t know that she’d kept all of this inside. I thought this [event] was a good place to share the side of [colonialism] that doesn’t get heard. The European side is heard a lot. Not her side.”

Waithira painted the images on large canvases with striking colors and life-like portraits of Kikuyu members and British soldiers that accentuated the brutality of the resistance movement.

Both Ewunnet and Waithira hoped that their event would open a conversation about resistance and what that means to each individual today, in addition to telling the narrative of their respective cultures.

“I hope [this event] activates the ability in my peers [to resist], especially as the U.S. government is undergoing a shift,” Ewunnet. “I want people to be able to feel their own agency.”

In addition to promoting activism among her peers, Waithira commented on wanting to express the effects of colonialism as a generational issue. She explained that she feels the anxiety that was passed down from the hardships of the older generations and questioned her identity during the artistic process.

“Recreating the stories really had me in my head; I thought a lot about the traumas that my great-grandmother went through,” Waithira said. “Am I real Kikuyu woman? Would I be able to have my belly cut open while I was still pregnant and still fight for my tribe? I don’t know.”

Olivia Wilk (sophomore) shared how rewarding it was to see all of Ewunnet’s and Waithira’s work pay off.

“The thing that made me the happiest was seeing [Waithira] watching other people look at her art and feeling proud of herself,” Wilk said. “It was beautiful.”

Layla Hamedi* (sophomore) explained that while the art did not personally speak to each viewer, the crowd was very supportive.

“While not everybody can directly relate to the stories of resistance, their work is really resonating with people,” Hamedi said. “I also enjoyed how there was a combination of visuals, live music and food, making it touching on so many aspects.”

Both Ewunnet and Waithira hope to continue exploring their narratives and creating art. After graduation in the spring, Ewunnet said that she’s interested in continuing to mix Ethiopian music, but also looking into the connection between music and public spaces.

Waithira added that she hopes to travel to other parts of Africa, starting with Kenya, to talk with people that lived through colonialism before that generation is lost. She described this passion as a new part of herself that she’s excited to explore.

“I feel like having this opportunity to try out a new event where I’m trying a new part of myself let me see how people would react,” Waithira said. “Today showed me that the world is willing to listen, which to me means so much.”

*Layla Hamedi is a staff writer for The Occidental Weekly.