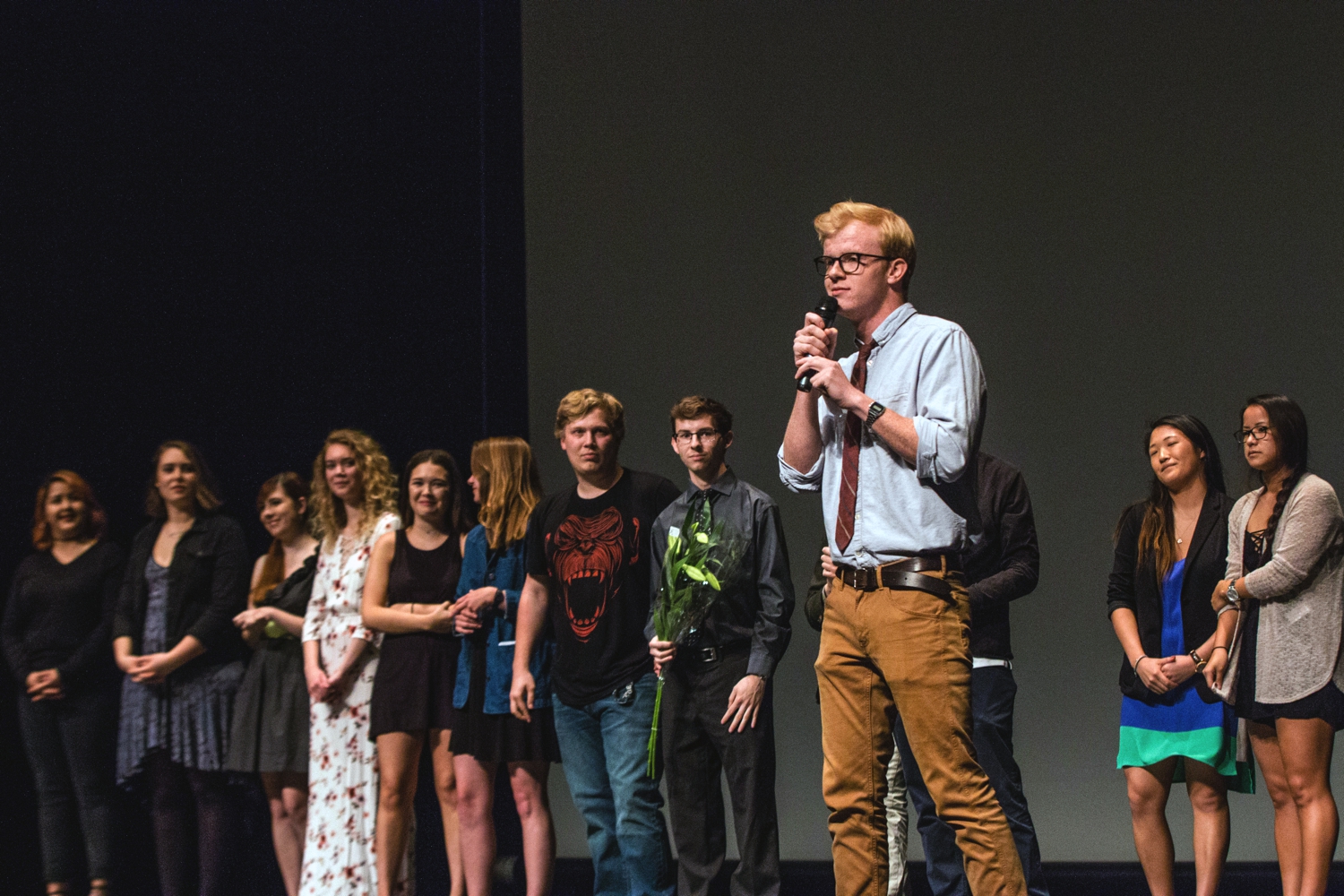 Media Arts and Culture (MAC) seniors presented their comprehensive projects April 13 and 14. With emphases in either production or critical media studies, MAC majors presented their comps in an array of short films and installation exhibits. Friday evening, at 7 p.m., April 14, sixteen seniors screened their comps projects — a series of short films no longer than 10 minutes — in a packed Thorne Hall. Attendees included students, professors, family and community members. With genres of comedy, drama and documentary, the audience enthusiastically applauded each film, evoking laughter from some and tears from others. The reception, complete with wine and cheese, took place in front of Thorne Hall to welcome guests and set a relaxed yet engaged tone before the event.

“This year we have an incredibly strong cohort of 16 seniors presenting media production projects that display a wide array of documentary, experimental and fictional media practices. I had the pleasure of mentoring the seniors through project development and production this fall,” Professor Brody Fox, chair of the MAC department, said.

After a brief introduction, the films of all 16 seniors played without interruption. César Martinez’s documentary film, “En Memoria,” told the story of a cemetery that housed the bodies of immigrants who died while attempting to cross the U.S.-Mexico border. The film provides a human face to those who, out of desperation, risk their lives to cross the border. It also highlights the guards who patrol the border.

Kyle McCue’s (senior) film, a social commentary on hook-up culture at college, featured Occidental actors Lindsay Fisher (senior) and Charlie Haakenson. An Italian Shoemaker reflects on a lost love in Grace Brescia’s (senior) “Alberto.” And Joshua Harmon gets ready for a job interview, starting off strong then losing steam quickly, in Danny Scharar’s “Before the Interview.”

While Professor Fox is on sabbatical this semester, the seniors worked with Assistant Professor Dr. Sonja Bertucci and Occidental’s Manager of Digital Production Diana Keeler. MAC majors work on their comps for a long time — students begin conceptualizing their projects during their junior year.

While each senior’s thesis reflects the unique style of the filmmaker, their films come together with the help of fellow seniors and MAC majors. During the fall of senior year, the majors are organized in groups of four, providing a team to help direct, record lighting and sound, produce and film each other’s projects. Students dedicate the majority of the spring semester to editing.

Throughout the process, some student directors collaborated with Music majors under the guidance of Professor Adam Schoenberg to produce original music for films, as well as junior MAC majors who can take intermediate production classes that allow them to work on a senior’s film.

“Comps is such a milestone in the journey of our majors, and I’m thrilled to get the opportunity to celebrate these accomplishments with our seniors,” Fox said.

MAC major Rick Pfleeger (junior) commented on the recent changes within the department. Pfleeger said that the reason for the increase in documentaries might be due to the creative way in which documentary courses are taught. According to Pfleeger, the department has been pushing for students to explore mediums outside of fiction.

As a MAC major already preparing to go through the process, Pfleeger commented that seeing this year’s seniors reinvigorated his excitement for the project.

“I thought that the MAC Majors really brought their A game this year. It seemed like plot lines were well thought out and a lot of the comedic films especially garnered a lot of laughs,” Pfleeger said.

Thursday, April 13, eight seniors presented their MAC Critical Media Comprehensive presentations and Honor Presentations in Choi Auditorium. Different from a film screening, this was more of a scholarly discussion of their comps. This year, Professor Allison de Fren taught students to produce videographic criticism, a new form of media scholarship that integrates the essay film with emergent possibilities of the digital humanities to expand forms of writing and publication. Essentially, scholars pull images and sound clips from the media texts they are examining and edit them together, often with accompanying voiceover, to produce essays that are watched or listened to rather than read.

These essays possess the same potential for deep analysis and theorization possible through writing but also open up new rhetorical possibilities for audio visual argumentation or exemplification that enhance and often surpass the capacities of the written word, according to Professor Fox.

Occidental’s MAC department used to be housed under the Art History and Visual Arts department. In 2016, it became a separate department, growing in both number of classes offered and students available in taking classes.