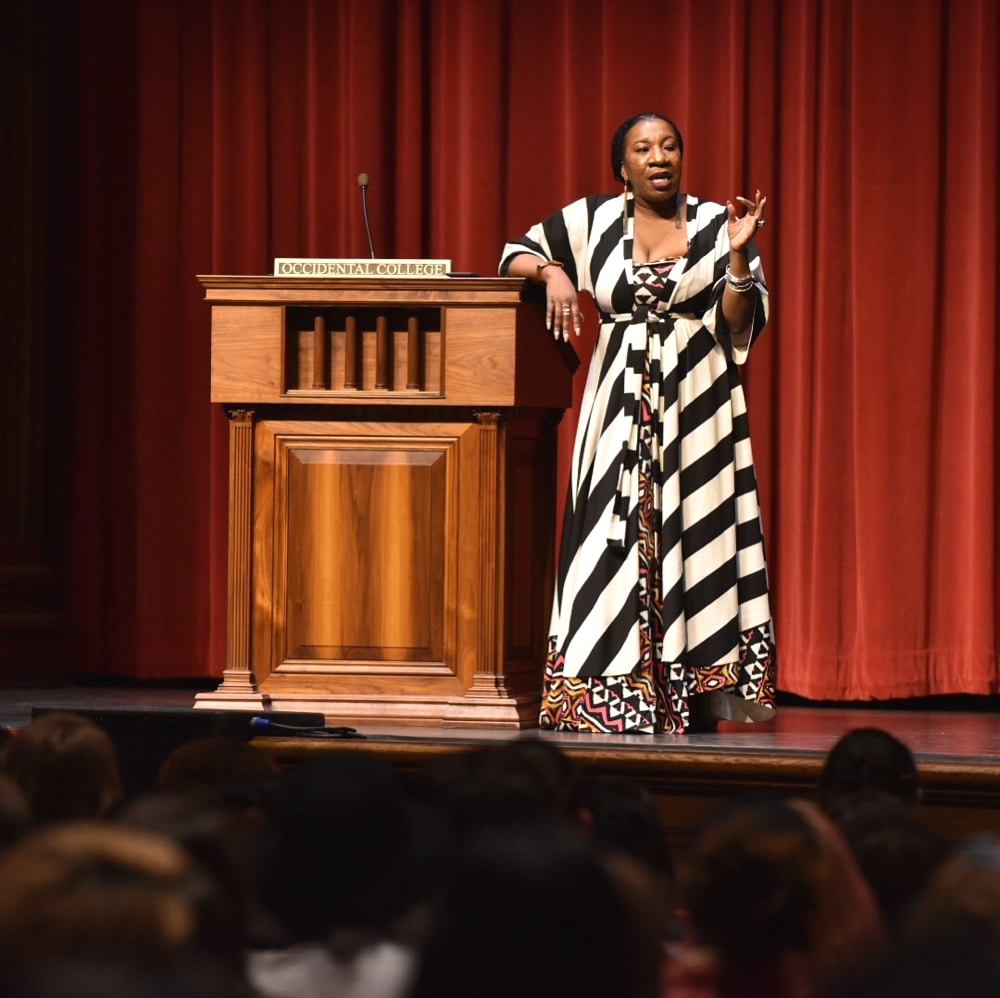 Students, faculty and community members filled Thorne Hall to capacity Feb. 26 to hear the founder of the Me Too movement, Tarana Burke, speak. Burke has dedicated over 25 years to activism surrounding sexual violence, focusing on survivors, providing access to healing resources (particularly to the most marginalized communities) and intervening in sexual violence across all communities. Recently, the hashtag #MeToo went viral as over 12 million individuals shared their experiences with and comments on sexual assault and harassment. Burke said during her address that the viral sensation has led to multiple misconceptions about the purpose of Me Too. She came to Occidental to set the record straight, reminding her audience of the tremendous amount of work surrounding the seemingly simple hashtag.

Burke has been organizing since she was young. She grew up in the Bronx in what she called a black nationalist family. She said that her grandfather and mother gave her a rich historical education when she was young. Burke put this knowledge into action when she joined the 21st Century Youth Leadership Movement at age 14 and was trained in grassroots organizing.

Burke first organized around the Central Park Jogger case, in which five boys, four black and one Latino, were wrongly convicted of raping a white woman in 1989 and were only exonerated ten years after their initial sentencing. During the trial, Burke and her peers were inspired to take a stand. It was her first instance organizing around racist representation in the media.

“This solidified what I was going to be,” Burke said. “As a young person, I could stand up, raise my voice, gather my peers together and do something about something I knew was wrong and get some result. This started my organizing journey.”

Burke said throughout her history in organizing around racial and economic justice, the discussions of injustice were not examined through a gendered lens or regarding gender-based violence. Through her experience as a sexual assault survivor, Burke shifted her focus onto interrupting sexual violence towards women and girls of color. Burke founded Just Be Inc. to help girls of color recognize their self-worth. Just Be Inc. aimed to create intimate spaces, in which girls eventually began revealing their experiences with sexual violence.

“Sexual violence is a community issue if it’s happening to child after child. Me Too was born out of necessity, so these girls know they are heard, seen, believed, and know there is life after trauma; there is a trajectory of healing you just haven’t been exposed to yet,” Burke said.

Burke said she was grateful for the elevated platform that the viral hashtag created. She expressed frustration, however, with media cycles that have reshaped the movement to focus on taking down powerful men rather than focusing on survivors and healing as the movement was intended. Burke stated that the women who accused Harvey Weinstein did not call for anything except for a space to speak their truth, and everything following has been a corporate response focusing on perpetrators rather than survivors.

“I wanted to ask about intersectionality and how she navigates supporting different and sometimes opposing communities with such a universal movement,” Leon said.

Both Leon and Ward expressed their gratitude for the opportunity to be in conversation with Burke and for her candid, thorough responses.

“The positivity and poise she exudes wraps around you like the warmest blanket at Grandma’s house,” Ward said. “And beyond that, her activist framework reflects a very much needed community-based approach focused on our children who are disposed of.”

Burke concluded her dialogue with Ward and Leon by assuring the audience that they have the right to use, or not use, the hashtag too.

“#MeToo is not for anybody to hoard,” Burke said. “If you find healing in this I’m not taking this from you and no one else should.”

Burke also discussed the importance of survivors taking ownership of the hashtag #MeToo; She hopes they become empowered in owning their decisions and harboring the ability to decide what is best for them personally.

“And so if you decide to tell your story you own the right to do that, but deciding not to tell your story is also a decision,” Burke said. “I stand up and I say ‘me too’ every day so those people don’t have to. And they are very much a part of this movement.”

Burke highlighted how all experiences of survivors are valid, not just the romanticized versions of complete and total healing.

“I still wake up every day and decide to survive,” Burke said. “The healing journey is hard and we have to be honest with people — there is an ugly underbelly to surviving. All of it counts. Those days where you can’t get out of bed are just as important as those days you’re up and about and handling things. It’s the survival journey.”

Ward expressed appreciation for the supportive environment that Burke created.

“Hearing Burke’s narrative was validating, it made me feel like there was someone who gets it,” Ward said. “It made me feel safe.”

Marianne Frapwell, manager and survivor advocate of Project S.A.F.E., and Dana Michels, the group’s coordinator and prevention education specialist, recognized the importance of Burke’s survivor-based vision of Me Too. Michels said that Project S.A.F.E. will continue this conversation throughout April in a month dedicated to sexual assault awareness.

“The Me Too movement is so important for college communities,” Frapwell said. “It re-focuses our attention on the voices and stories of survivors and reminds us all to believe them, help them heal and commit to creating communities free of harassment and violence.”

Burke ended her talk by calling on the community to serve as ambassadors and change the narrative surrounding Me Too.

“Tweet about it, write about it, I need people to talk about what Me Too is really all about,” Burke said. “It is about supporting survivors of sexual violence; it is about centering the most marginalized among us and making sure they have access to those resources they need for their healing journey and it’s about a call to community action to interrupt sexual violence wherever it lives. Period.”