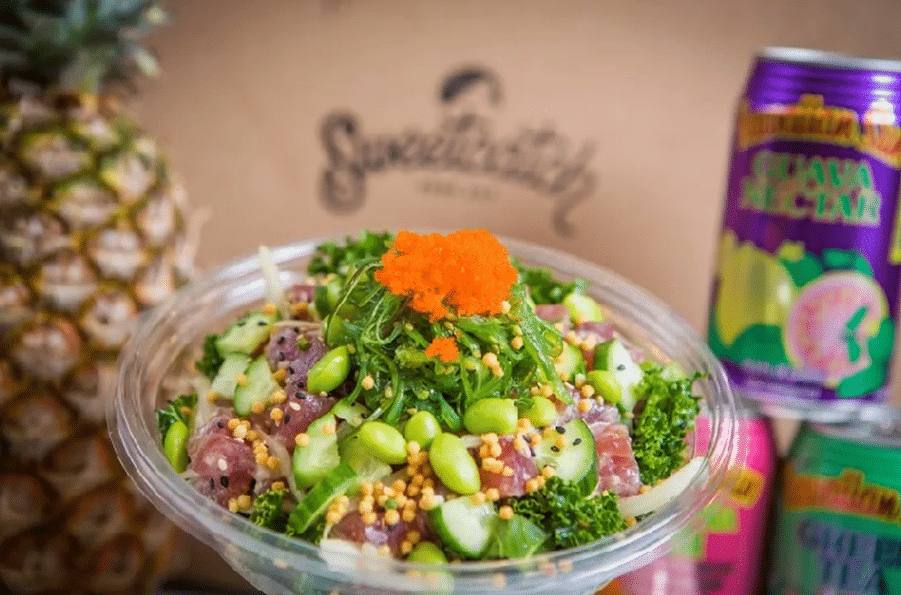 Colorado Boulevard’s newest poke spot, Eagle Rock Poke Shack, had its grand opening March 17. The restaurant is a quick drive from campus and owned by Jason Novak and Kelly Britton. Poke, according to Eater, is a Hawaiian dish consisting of raw fish. In addition to traditional poke, the shop offers poke toasts and spicy tuna nachos.

Both Novak and Britton hail from Chicago. For the past 20 years, Novak has been a music producer, promoter and performer. After working for a restaurant owner in Chicago, Britton ran a spa for 10 years. They have experience in the food industry mainly behind a counter and also have experience in the kitchen, according to Britton. Together they run a Chicago and L.A. based suicide and addiction prevention and awareness charity called Darkest Before Dawn. In addition, they organize Cold Waves, a music festival that occurs in Chicago, New York City and Los Angeles.

According to Novak, when Britton and Novak moved to LA, they immediately fell in love with poke.

“We came out to California and had never had poke before and tried it and fell in love. We were almost obsessed. We became poke connoisseurs,” Britton said.

According to Novak, they came across an opportunity to buy the space in Eagle Rock and decided poke was the most appropriate cuisine for their potential business.

“This [Eagle Rock] has always been a favorite place to visit since our first venture here several years ago when we attended the Eagle Rock Music Fest. Since then we have circled back often for the food, the vibe and the culture this neighborhood has to offer,” Novak said via email.

Britton added that they also love Eagle Rock for the diversity and the family-friendly environment.

Novak said that they have experienced gentrification in Chicago. He hopes to make the poke shack accessible to people of all backgrounds in the Northeast LA area.

“From what we can tell there is a real balance here that seems to respect the past and future of this neighborhood equally,” Novak said via email. “We hope to keep the vibe of our poke shack more laid back, family friendly and welcoming, the music a little louder, the attitude a little more loose, while offering a bit of Latin and Asian upgrades to the standard poke experience.”

The restaurant is a small space with several tables and chairs around the room, including the outside of the shack. It follows a beach theme, with a mural of Hawaiian dancers. The menu is written on a side wall and there is a selection of fish, sauces and vegetables on a bar.

Teagan Langseth-Depaolis (first year) has been to Eagle Rock Poke Shack twice already. According to Langseth-Depaolis, in addition to the delicious food, reasonable prices (including a kids-bowl price) and great service, she enjoys the environment of the shack.

“I feel like I should be walking out on the beach rather than Colorado,” Langseth-Depaolis said.

Britton said that the Hawaiian beach theme, the outdoor and indoor chairs and tables, music and free Wi-Fi are meant to make people come to study or simply gather.

“We didn’t want it to seem commercial. You know, we wanted it to be more cozy and a place where you’d want to sit and hang out. We didn’t want shockingly bright lights,” Britton said.

In relation to ordering their food, Britton said that the poke shack is unique, because people order food by reading it off the wall, as opposed to picking out the ingredients from a bar of selections. Another way to order would be to fill out a menu card.

“We aren’t set up to where you come up to the front and say, ‘some of this some of that,’ we make the bowls for you so it’s a little less subway. I feel like it’s more fun to just get the bowl versus seeing someone make the bowl just like that,” Britton said.

“He [Novak] always says ‘If you have something better going on, go ahead.’ He’ll come in and work personally, which I’ve never met another owner of another place who does that,” Santana said.

Santana also gave insights on Eagle Rock Poke Shack compared to other poke shack places he has worked at, including in Beverly Hills and Downtown.

“At other spots, you get the spicy tuna and it’s like this brown mush because that’s the [bad] parts of the tuna going bad and they just put some sriracha on it and go ‘oh its spicy tuna,’” Santana said.

According to Santana, Eagle Rock Poke Shack emphasizes quality, has no machine-processed foods and even cuts the fish themselves. Santana said that the quality of the fish and the poke bowls themselves is clear in the reviews.

According to Britton, she and Novak try to be as accommodating as possible and offer tofu, gluten free soy sauce and even coconut amino acid.

Eagle Rock Poke Shack now has a 10 percent student discount for Occidental students who show their student ID. They hope to be a part of the Occidental alumni weekend in June, according to Novak.