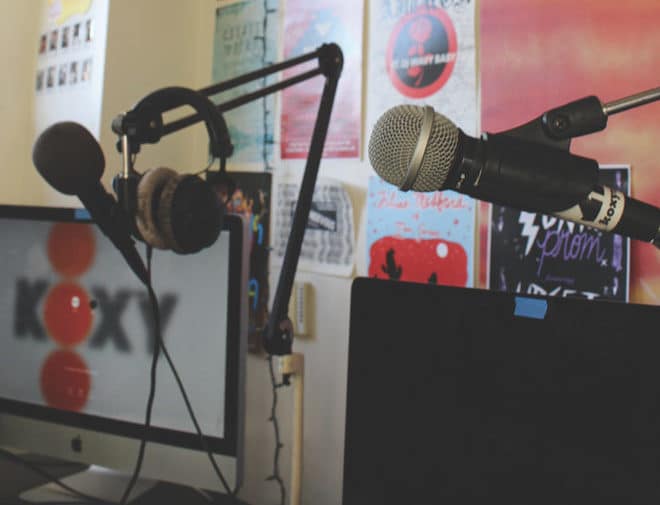 KOXY Radio’s newest station manager Mariana Martinez (senior) has big plans for the expansion of KOXY this semester, such as growing its audience and building on the momentum of the success of the first show of the semester. Martinez explained that KOXY prides itself on radio shows centered around entertainment, social, educational and professional interests of student life.

Martinez previously worked as a student DJ at KOXY. This year, she will be working as the studio manager. Martinez said that she has solid goals for KOXY this year, stating that while the station wants to maintain longtime listeners, they are excited to welcome new first years and their new ideas. This year there will only be one station manager, when in the past there were usually two — this is due to Martinez being the only senior on staff and the only eligible person to take on the station manager position, according to Martinez.

“This changes the staff dynamic, but we are focusing on bigger shows and more people getting involved,” Martinez said.

Sept. 7, KOXY put on its first event of the semester outside Thorne Hall, where students gathered to enjoy a performance by emerging rapper Kari Faux. Martinez said Kari Faux brings a great mix of R&B and soul influences to her music which demonstrated Occidental’s diverse taste.

“It was a great event and really kicked off the year,” Martinez said. “KOXY wants to continue to grow from last weekend’s great show, run more events and just get new people involved.”

Martinez said one of her goals for the upcoming semester is to maintain KOXY’s focus on being a supportive and resourceful space and as open of a community as possible.

“We are just trying our best to keep up with the mission statement of KOXY, to ensure it is super accessible to all,” Martinez said.

Tulula Sofitsi Docherty (junior) applied for and received her own radio show at KOXY and said that she was pleased with how open the KOXY community is.

“We welcome new ideas, it is not competitive in that sense,” Docherty said. “It’s cool that they make DJing available to anyone — it feels super inclusive and it is also a great way to do something creative and fulfilling outside your studies.”

Rosie Stevenson (junior), an exchange student from Bristol University in England, said that she hopes to bring a radio show from back home and host it here. Stevenson plans to call the show “Girls on Film (LA Edition),” during which she will focus on a different film category each week and discuss the iconic soundtracks of each genre while playing memorable songs.

“I’m really looking forward to getting more involved in the Oxy community through the KOXY radio show,” Stevenson said.

There are a number of opportunities to engage with the station as KOXY prepares for the semester ahead. Check out what KOXY is up to on their Instagram and Twitter at @koxyradio.