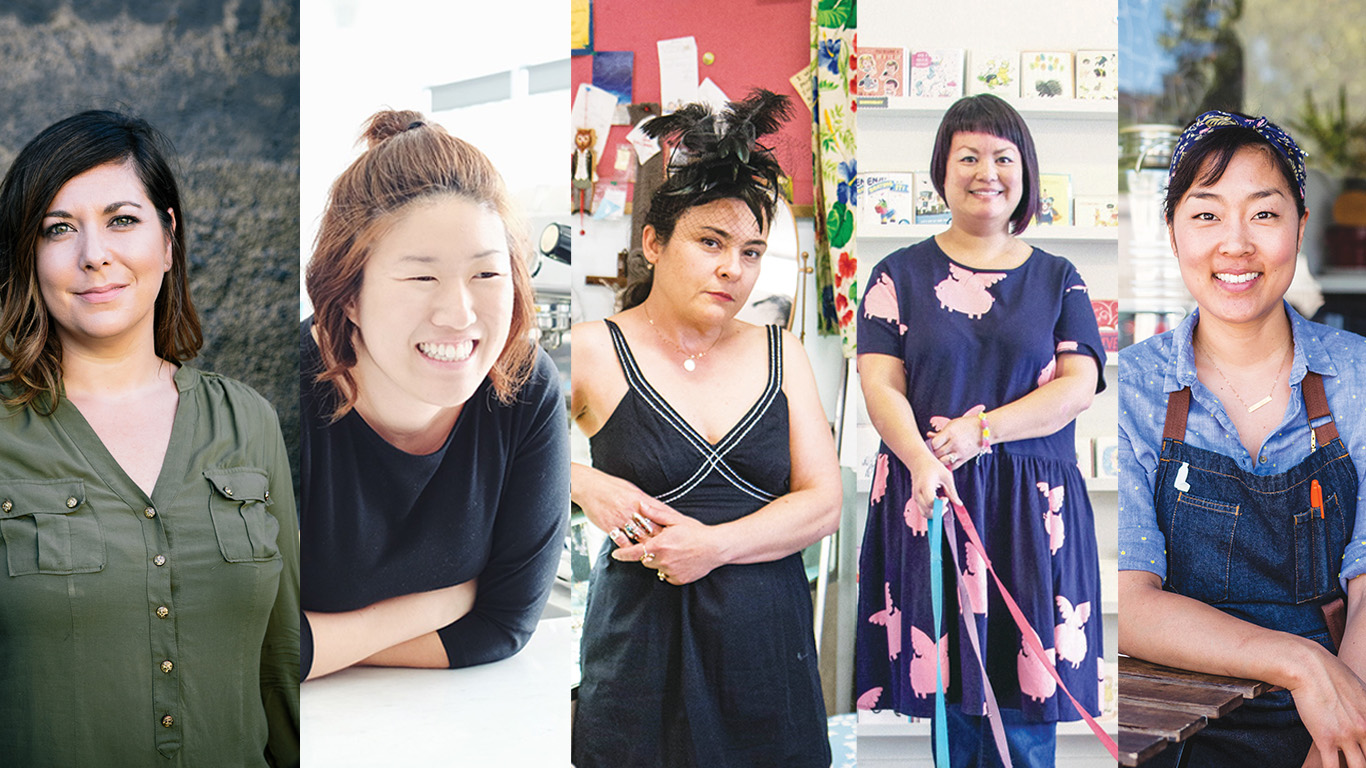 With its diverse food options and niche stores, there is a reason Redfin named Eagle Rock the second “hottest” neighborhood in the country. Eagle Rock is booming with small businesses, a number of which are owned by women. Many of these women comprise the Lady Bosses of Eagle Rock, a club of local female business owners.

Lady Bosses of Eagle Rock was founded in March 2015, by Michelle Harwell, owner of Michelle Harwell Therapy. The group consists of approximately 50 members and meets quarterly, rotating locations to the businesses which can host. The club’s only requirement is that members identify as female and own a brick and mortar establishment within the 90041 zip code. Each meeting focuses on one informational aspect of business, ranging from accounting to social media or business security, as well as supporting each other in their personal experiences as female entrepreneurs in a typically male-dominated career.

“Women want to know other women, and we have this unique capacity to build community and learn from each other and support each other,” Harwell said.

Annie Choi is the owner of Found Coffee, located on 1355 Colorado Boulevard which she opened just two years ago, in February 2015. She also recently opened Frankielucy Bakeshop in December 2016 on 3116 Sunset Blvd. Harwell asked Choi to join the Lady Bosses of Eagle Rock when Harwell first began organizing it. Choi loves being a member of a group in which she and other female business owners can empathize with each other, as well as network and learn about important, relevant topics, such as taxes.

“I love connecting with other female entrepreneurs in the sense that we kind of have this camaraderie of misery — misery loves company, yes — but also I think we get to bounce ideas off of each other. I really benefitted from the tax meeting that we had,” Choi said.

According to Choi, connecting with other women through the Lady Boss club removes the superficiality of networking. Choi enjoys the system of support and the environment the club fosters — women unabashedly passionate about their careers.

“Female business owners bring something into this world … We need to speak up. Women have so much to offer and change the world,” Choi said.

Leanna Lin is the owner of Leanna Lin’s Wonderland which carries unique art, jewelry, accessories, gifts and home decor on 5024 Eagle Rock Boulevard. Lin established her business in Eagle Rock in 2010 and is looking forward to celebrating the seventh anniversary of her opening this coming July. Lin attended the Fashion Institute of New York and then worked in the corporate sector for 14 years until she realized that she wanted to develop her own art and stop relying on the larger agencies to dictate what was aesthetically pleasing.

Lin first opened her business without a clear idea of what she wanted to sell. She was interested in learning about her surrounding community’s interests and how she could supply that demand through an artistic lens. When Leanna Lin’s Wonderland first opened, most of what she sold was self-made jewelry. Over the years, her business has evolved to include merchandise she hopes appeals to the younger generation, ranging from teacups and apparel to artwork and stationery.

Lin admitted that there are several challenges that accompany being a business owner.

“It’s been difficult to have to analyze everything and see what works. While I might have really liked a collection it might not sell and that’s part of realizing that all sorts of people appreciate different things,” Lin said.

Another challenge for Lin has been keeping up with the digital age. With online shopping becoming so commonplace, she has needed to change her payment methods three times. Thankfully, her intern, Occidental alum Natalie Naito ’16 helps her run her online store.

Involvement in the Lady Bosses club is relatively new for Lin but she maintains how powerful it is that so many of the businesses in Eagle Rock are female-owned.

“The group is a way to connect and support each other and really demonstrate that women can be entrepreneurs, too,” Lin said.

Lin is currently collaborating with another lady boss to organize a workshop about self-defense strategies.

Lin has also hosted many pop-up workshops to celebrate and sponsor other artists in the area. From 1–4 p.m., May 21, she will be hosting Shinah of Crooked Calligraphy to teach a “Modern Calligraphy Workshop” on the basic tools and proper techniques of modern pointed pen calligraphy.

Sisters Kathleen Kroner and Sharon Kroner own Owl Talk, a resale and retailer consignment boutique located on 5060 Eagle Rock Boulevard. Sharon was a fashion major at Otis College of Art and Design and then went on to work in the garment industry. After being laid off in 1993, she wanted to start her own business with her sister.

“She came to me and said ‘I want to open a store, and I want you to be my partner.’ And I thought that was a crazy idea because we had $2,000 between us and we’d never done anything like this and we were both in our twenties. But after a couple months, she convinced me,” Kathleen Kroner said.

Within two months, the sisters, 25 years old and 27 years old at the time, officially opened their consignment store with just $3,000. The store is nearing its 23rd year of business. The sisters have witnessed Eagle Rock’s rapid change over the years.

The process of owning a business has not come without its challenges. In the past 23 years, the two have dealt with financial, retail and lease challenges, as most business owners do.

“One big challenge right now is growth,” Kathleen Kroner said. “Trying to grow and finding it hard to in this ever-changing, current economy.”

The difficulties do not stop there — they have also had to put up with comments about their capabilities as women.

“When people see two young women running a store, when we first opened, we got a lot of misogynistic comments that we didn’t know what we were doing,” Kathleen Kroner said.

Despite these prejudices, the sisters persevered and successfully worked through each task on their own. While the sisters were initially invited to be a part of the Lady Bosses of Eagle Rock club, neither are currently involved due to family circumstances they are juggling in addition to their business. Still, Kathleen Kroner greatly admires the community that the Lady Bosses of Eagle Rock cultivates.

“I love their energy, and I love the fact that they’re doing this,” Kathleen Kroner said.

Harwell’s practice is located on 2120 Colorado Boulevard. She is a licensed therapist specializing in trauma, depression, anxiety and complex relationship issues. She leads a team of eight women therapists who have helped her broaden her practice to offer psychotherapy, support groups, parent consultations, workshops and developmental assessments. Part of her group is Occidental’s very own Sara Semal, senior director of Occidental College’s wellness center. Harwell hopes that the Lady Boss brand will expand to other areas and encourage other women to come together. She says the club’s emphasis is on the women getting to know each other.

“It’s about getting to know women in your area and not going too broad, but going deep,” Harwell said.

When she opened her practice in 2011, Harwell was living in Eagle Rock. The neighborhood’s creative spirit inspired Harwell to create Lady Bosses.

“About a year and a half ago, I realized was that many of the businesses I frequented were owned by women, ” Harwell said.

Together, Harwell and Fierro decided to reach out to other female business owners in the area. As co-founder, Harwell has been responsible for organizing group meetings, searching for guest speakers and dealing with correspondence. Harwell was quick to admit that her involvement in the group has positively contributed to her experience as a business owner in more ways than one.

“It’s given me confidence. It is really important to emphasize that as a woman I am free to be all parts of me. As a female business owner, I am a nurturer, and that can help me build community within my business, which is a good thing,” Harwell said. “Also to realize that I am bold, I am sexy and I speak out, and that there are other women that are doing it in a similar way and others that are doing it differently.”

In the last year, Harwell has expanded her practice to Highland Park and hopes to find a community there like the one she has found in Eagle Rock.

Park Fierro is the owner of Milkfarm, an artisanal cheese shop and lunch counter located at 2106 Colorado Boulevard. She has lived in Eagle Rock and been running her business for three years. Fierro has been working in the food industry for 18 years, originally as a pastry chef for luxury hotels. After quitting her pastry job, Fierro traveled around the world for a year. Upon returning home, she missed the niched, specialized food shops she found in Europe and she looked for a job at an independent cheese store. She worked at the Cheese Store of Silverlake for six years. Fierro wanted to create something of her own, however.

Harwell is a frequent customer of Milkfarm. A year ago, when Harwell had the idea to start the club, Fierro was one of the first women she approached.

“I was 100 percent on board immediately, like the second the words came out of her mouth, I was all about it. I’m very, very, very proud to be a female, minority business owner,” Fierro said.

Fierro enjoys being a member of a club that provides not only a network of support, but also informational sessions to help guide the members as entrepreneurs.

“It’s very empowering … to just be around so many successful women who have really, really great, popular shops in Eagle Rock. It makes you feel really extra proud to be in this neighborhood because you know there’s so many other women that stand side by side with you,” Fierro said. “I’m very proud to say that I am a business owner in Eagle Rock and I think that this group really brings us together.”

Find out where they are