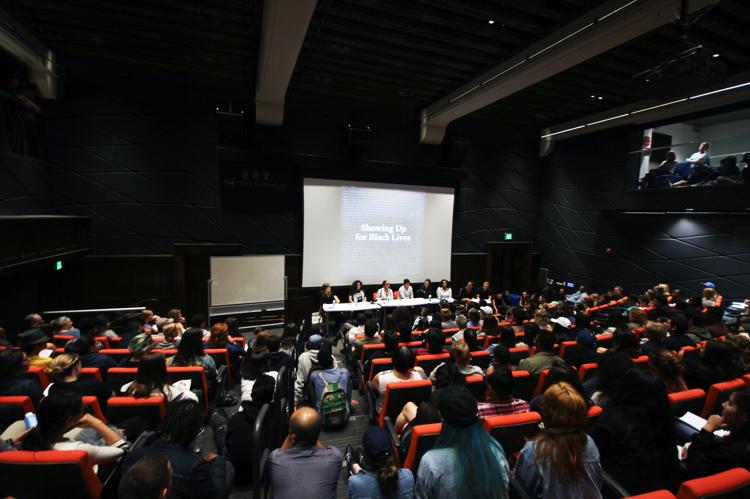 Camille Cribbs (senior) welcomed a packed Choi Auditorium last Thursday to “Showing Up for Black Lives,” an event designed to generate awareness of the need to combat racism while striving for black liberation. As she spoke, an art piece consisting of the 203 names of black people killed by law enforcement between Jan. and Oct. 2016 was projected against a backdrop. The piece was created by Layla Hamedi* (sophomore).

“We wanted to elevate the importance of solidarity with black people in a time when law enforcement and other networks of power target black folks disproportionately with lethal results,” Cribbs said.

“The diversity of the group of [all 19 students] demonstrates that there is a deep care and concern for black lives across a wide spectrum of backgrounds, identities, class years and experience,” Tahani-Bidmeshki said.

“This was not just a cerebral experience,” Tahani-Bidmeshki said. “There was something powerful happening for folks beyond just a traditional intellectual exploration of theory.”

Organizers were proud of how their event fused an intellectual understanding of black oppression with the emotional feelings of urgency and compassion needed to fight against it.

They did so by incorporating Theater of the Oppressed, a style of participatory theater developed by Brazilian Augusto Boal in the 1960s. According to Adams, Boal developed this practice so that different populations can actively reflect on and envision not only what collective liberation or oppression looks like, but also how it feels.

After introductory remarks by Cribbs, Chen and Pattinson, event facilitators ushered the audience out of Choi Auditorium, divided them into groups of about 20 and led them into various classrooms for the Theater of the Oppressed workshop. Facilitators asked student participants to reflect in silence for two minutes on how they felt in relation to black oppression and racism. Facilitators then asked participants to assume a pose or posture that represented those feelings. Some students sat near the edge of the wall or laid down prostrate, while others turned their backs and pushed against the wall with lowered heads. After participants found their pose, each room took time to discuss the feelings, thoughts and experiences that informed different postures.

“[Theater of the Oppressed] shows how much our bodies can say that words alone cannot,” Cribbs said.

Professor Tahani-Bidmeshki added that she and the organizers wanted the exercise to produce a sense of being present and engaged — physically, mentally and emotionally — before listening to the panelists.

“We intentionally did not advertise this section, which was somewhat risky, but I think it paid off because we were able to reach people who normally wouldn’t engage in activities directly pertaining to racial justice,” Chen said.

“Each [panelist] contributed to the various anti-racist actions of recent times with unique approaches to organizing and community work,” Tahani-Bidmeshki said.

They spoke to questions regarding alternative forms of traditional law enforcement, rifts within liberation movements such as not being “black enough,” how to maintain a sustainable movement within social justice, the practice of self-care and more.

“[Social Justice education spaces] traditionally ignore the high impact of feelings of depression, hope and burn-out,” Adams said. “The contemporary [panelists] modeled how to share and work through the emotional tolls and successes of organizing.”

Toward the conclusion of the event, Jasmine Abdullah, founder of BLM-Pasadena and panelist speaker, emphatically reflected on some of the night’s most important themes.

“What this [event] means is people showing up for humans … it’s us taking ourselves out of ourselves for someone else,” Abdullah said. “When you do that, ultimately you’re standing up to injustices that have been happening to our people for so many years.”

In the future, the “Showing Up for Black Lives” organizing collective is working on Nakumbuka Day, an event to commemorate the genocide of African peoples. Free and open to the public, it will be held Nov. 12 at Occidental.

*Hamedi is a Weekly staff member.