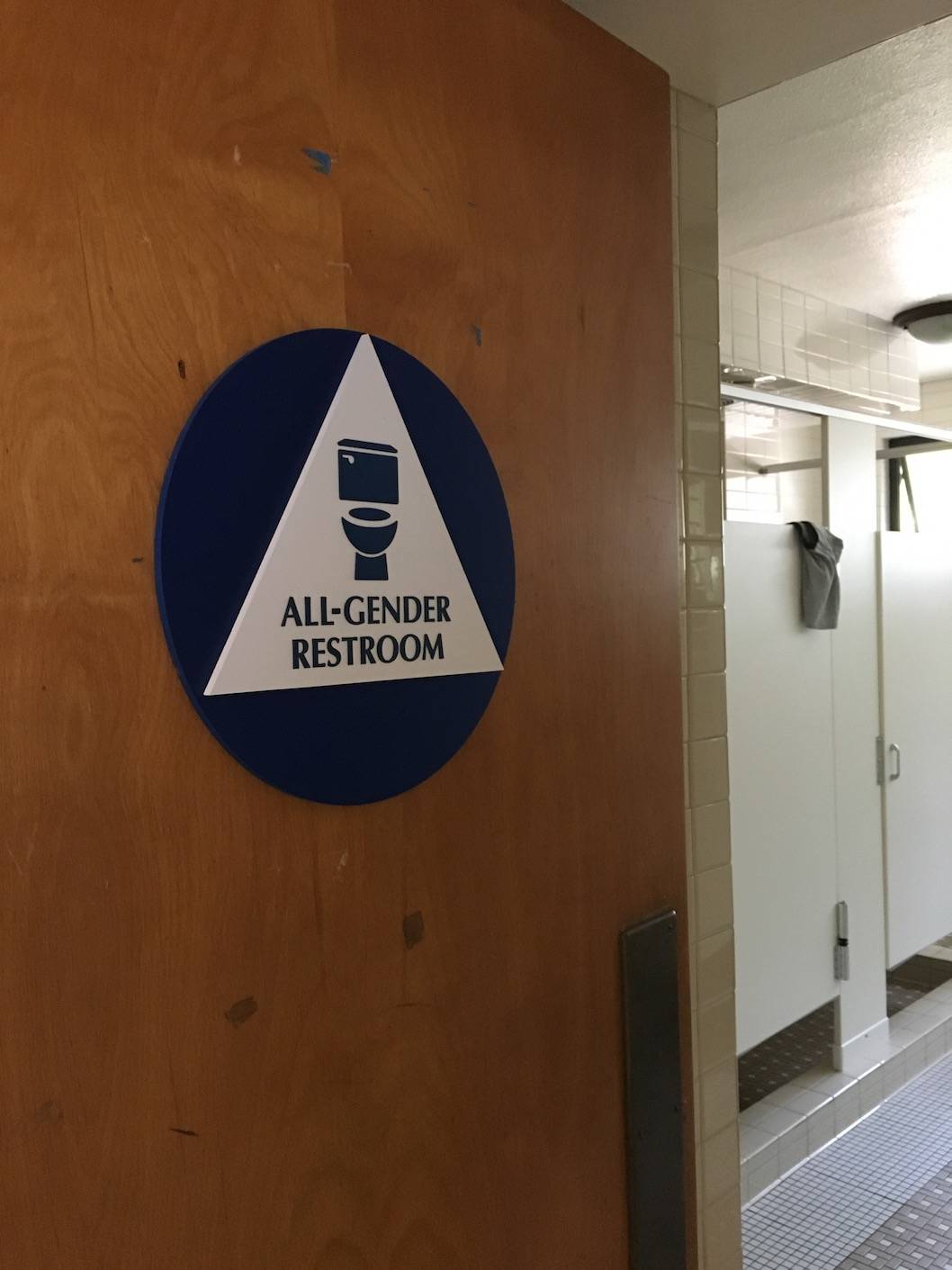 Haines Hall was vandalized earlier this month when an LGBTQIA bulletin board was destroyed and a gender neutral bathroom sign was removed, with “men’s bathroom” scribbled in Sharpie in its place. The sign, reading “all-gender restroom,” was taken down early in the morning Oct. 8; Haines Resident Advisors (RA) presume the bulletin board was destroyed at the same time. After RAs’ urgent requests, Facilities staff have since replaced the gender neutral sign.

Haines is an upperclassmen residence hall that was designated a gender inclusive dorm in March after students demonstrated to Residential Education and Housing Services the need to expand gender inclusive bathrooms and housing options. As of this academic year, students of any gender identity can now live together in any room in the building, and all building bathrooms are labeled “gender neutral.” In the past, students had to apply for housing in Berkus Hall through a process separate from room draw if they wished to live with someone of the opposite gender.

Angelica Lindsey-Velez (senior) lives in the Haines hallway where the vandalized bathroom sign was located.

“At first, it made me slightly uncomfortable,” Lindsey-Velez said. “You’re using the bathroom, and you know that maybe someone in the building doesn’t want you to be using that bathroom.”

Lindsey-Velez does not know who committed the act, but does not attribute it to serious intent.

“I assumed it was a joke, like some guys got drunk or something,” Lindsey-Velez said. “But why would that be your activity of choice?”

Haines residents were first formally informed of the issue Oct. 12 in an email from Haines RA Marianna Babboni (sophomore).

“There have been two serious vandalism occurrences that must be addressed for the safety and inclusivity of our community and its members,” Babboni wrote in the email. “We want to remind all of you that tearing down posters/signs/decorations and graffiti-ing are forms of vandalism and will not be tolerated here.”

Babboni was not on campus over fall break when the vandalism occurred. Nico Bluffin (junior), the Haines RA on duty at the time, received a message about the vandalism of the bathroom sign, but did not witness it immediately as he does not live in the second floor hallway where the events took place. Bluffin submitted an incident report detailing the vandalism soon after.

Babboni’s first reaction to the vandalism was anger.

“I just don’t understand who would think this is acceptable,” Babboni said.

She noted that the wall that was defaced with a Sharpie was school property, and that it was she who had put together the bulletin board that was destroyed. She considers the vandalism of both indicative of a lack of respect for other community members.

The bulletin board, located at the top of the first set of stairs on the first floor of Haines, featured information about the different types of queer identities. Babboni first put up the board in the beginning of October; it was only on display for about a week and a half before it was ripped down and placed in the trash.

“RAs work really hard to write up informational stuff that will help our hall that is interesting,” Babboni said. “It’s just so rude.”

About a week after Babboni sent the initial email, she and the other Haines RAs held a mandatory hall spread for their residents at 9 p.m. Oct. 20. Lindsey-Velez estimates that about half of Haines’ residents attended.

The RAs began the hall spread by informing residents of what had happened. They wanted everyone to be aware of the vandalism, which many students were not, as it was limited to one hallway and one bulletin board.

After the initial overview of the vandalism, Sara Semal, senior director of student wellness services, discussed the importance of gender neutral bathrooms. Babboni specified that they brought in an Emmons Wellness Center representative because they wanted the message to come from someone representing the institution.

According to Lindsey-Velez, Semal spoke about respecting the bathrooms as a communal space and emphasized that they are for everyone, regardless of gender identity.

After Semal spoke, the RAs tried to do an activity wherein students could write their comments and feelings on Post-it notes. They wanted to have a discussion, Babboni said, but no one participated. As a result, Haines RA Ginny Wyatt (sophomore) hosted a follow-up hall spread Oct. 25, but only three or four students attended, according to Babboni.

According to Wyatt, the college initially failed to take action in response to the incidents of vandalism. In response, the Queer Student Alliance is pursuing a Title IX investigation.