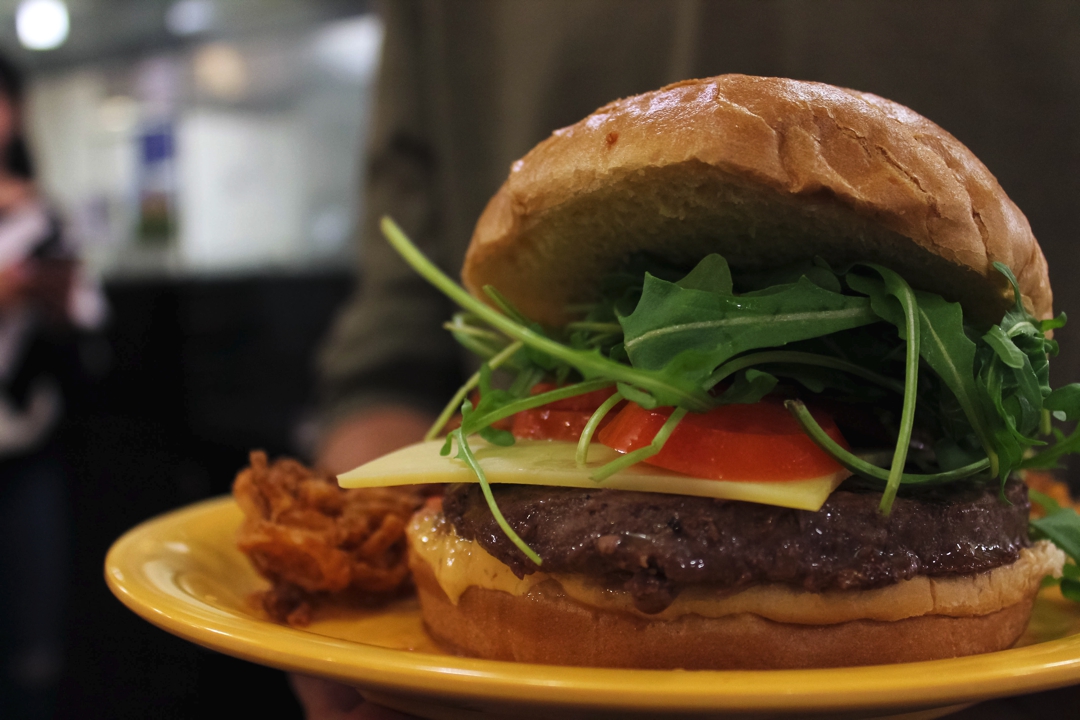 2017, most notably the Fully Loaded Better Burger, a humane option that replaces the factory-farmed beef patties typical of the Sunday dinner menu. The new burger option costs $12.50, double the cost of the previous burger, according to Robert Starec, associate director of Campus Dining.

Recent changes made as a result of Occidental’s commitment to the Real Food Challenge in 2014 include the new burger and the organic eggs at the omelet bar. The challenge is an effort to increase the amount of real food — defined as local, ecologically sound, humane and certified fair trade — sold on college campuses. Occidental’s personal goal of 30 percent real food is 10 percent higher than the general commitment, highlighting its dedication to the environmental movement.

According to Sammy Herdman (sophomore), lead intern for Sustainability Research and Implementation — a Campus Dining initiative — the meat is both locally sourced and humanely produced. The meat comes from family-owned V6 Ranch in Santa Barbara, where the cows are grass-fed. Their operation with Occidental College is their largest so far. Herdman explained that the cows raised for the burger meat on the V6 Ranch are able to exhibit natural behaviors, receive quality care and are not exposed to the animal cruelty common in large corporations.

Although the new burger’s increased price may concern students, Starec explained that students have plenty of options. The burger sold on days other than Sundays at the Marketplace uses the same meat as previously and is sold at the same price as before — half the cost of the $12.50 Better Burger. Students can also purchase beef, chicken, turkey, fish, portobello and veggie burgers from the Tiger Cooler for a cheaper price, made on the spot with customizable options. Campus Dining initially considered utilizing the Better Burger in all of its burger services but decided this change would not be affordable for students.

Some students have accepted the price increase.

“If you’re willing to spend more for more sustainable food then it wouldn’t be that big of a sacrifice,” Sarah Pike (senior) said.

While multiple students in line for burgers Sunday were not aware that there had been a change, they did respond to the different accompanying sides and toppings. At first, the switch to the humane beef patty accompanied a switch to onion strings rather than french fries or sweet potato fries. After students voiced their preference for french fries using the online suggestion box, Campus Dining brought the fries back.

In order to speed up the line, the new burger is served all-or-nothing, meaning that students get it with all of the new toppings, including organic relish, spread, arugula, tomato or none at all.

“That’s so limiting. I don’t like that at all. I’m going to get all of [the toppings], but that’s beside the point,” Anoop D’Souza (sophomore) said.

Campus Dining has responded quickly to the input of students following the change. In the more recent postings of suggestion box responses, comments on the Better Burger range from surprise and displeasure to compliments.

“If it’s going to make more humane burgers then it’s fine. Sure, it’s annoying that I didn’t really realize it but it seems like the correct thing to do,” Max Marion (junior) said.

Campus Dining thought it would be a good idea to create a menu that accurately resembles what students favor.

Occidental reached 24 percent real food in the 2015–2016 academic year, according to the Real Food Challenge web page. To help reach the college’s goal, students can purchase the foods labeled “Sustainably Sourced” and eat at the weekly specialty stations such as Saturday’s sustainable smoothie bar.“We’re always looking for ways to improve our stations or to change things up for the students. We strongly suggest that they put suggestions into our online suggestion box because I can relay a message or one of the cashiers can relay a message but it isn’t really heard until it gets to somebody that’s higher up,” Eileen Castellon, Marketplace supervisor, said.

“There are a lot of students on campus who are passionate about sustainability. Anyone who knows the details of factory farming, who cares about the environment, who cares about animal cruelty or labor rights … would, I think, support this decision to switch to humane meat,” Herdman said.