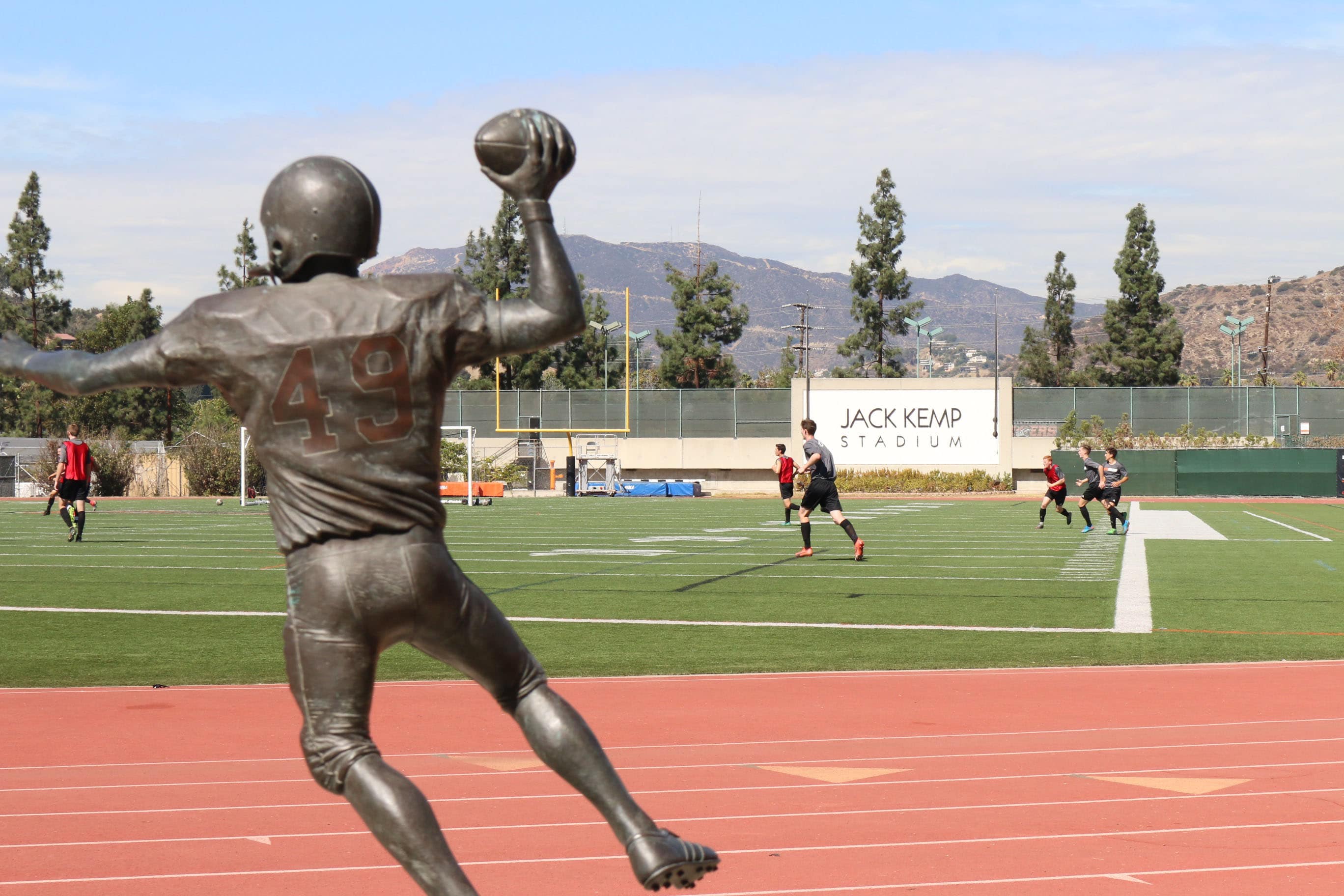 An anonymous party submitted a Title IX complaint to Occidental College and the Department of Education’s Office of Civil Rights (OCR) on behalf of an unspecified number of football players Oct. 4, alleging that Director of Athletics Jaime Hoffman and the department of athletics hold an anti-male bias that has compromised the football team and its players’ reputation.

The complaint implicates President Jonathan Veitch and the Occidental Board of Trustees for their support of Hoffman. The Occidental Weekly obtained the text of this complaint legally from a source on the football team.

According to the text of the complaint, the anonymous party submitted this complaint to Danica Myers, interim Title IX coordinator, and the OCR. The anonymous party copied Veitch, Interim General Counsel Rachel Cronin and Chair of the Board of Trustees Susan Mallory on the same email.

Myers confirmed via email that the college received this Title IX complaint.

“To protect student privacy, we cannot comment on the specifics of a complaint other than to say that the college has responded promptly and in accordance with its policies and procedures,” Myers said via email. “More broadly, the college is committed to the success and well-being of all of its students, in and outside the classroom.”

According to Myers, the OCR will make a decision to proceed with the complaint independently. She said via email that the college has a policy to prohibit gender-based harassment and discrimination. This policy encourages individuals to report misconduct and allows for anonymous complaints.

“While college policy provides for anonymous complaints, the college’s ability to respond may be limited depending on the extent of information available,” Myers said via email.

According to the complaint, the anonymous party highlighted two points among numerous alleged examples of an anti-male bias from Hoffman and the athletics department: a pattern of mismanagement of and a lack of material support for the football program, as well as a history of unpleasant interactions between Hoffman and the football team.

As an example of the first point, the complaint detailed the provision of inadequate practice pads and damaged helmets at the start of the 2017 football training camp this past summer.

Football wide receiver Carlton O’Neal (junior) — commenting specifically on the state of the football program — said that he and his teammates had personal experience receiving inadequate gear.

“A lot of the players on the team bought their own helmets, because they didn’t feel the helmets that were being provided were adequate,” O’Neal said. “I know my high school, which had more players [than Occidental], had far better equipment, helmets and shoulder pads.”

O’Neal said his equipment was outdated in addition to being inadequate.

“I’m wearing a type of shoulder pad with this elastic band that I haven’t worn since I played Pop Warner in fourth grade,” O’Neal said. “They’re old pads. I don’t think anyone’s made pads with elastic band straps in a while.”

Josh Greaves (sophomore), a quarterback on the football team, said that while the college canceled two football games due to the thin team roster size, other schools of similar sizes and academic quality such as Pomona and Claremont McKenna have been able to field full teams.

O’Neal said he was surprised that the college did not have adequate equipment for even a reduced team roster.

“I think the target number for Occidental college football is about 70-ish, and it shocked me that we only had 40 guys and we didn’t have good helmets for 40,” O’Neal said.

According to the complaint, Robert Cushman, head coach of the football team, brought the inadequate equipment to Hoffman’s attention at the start of the training camp. The complaint states that this incident is reflective of the hands-off approach of Hoffman and the athletics department that had consequences for players’ safety, recruitment and retention.

The complaint states that any investigation of Hoffman should include a consideration of how funding is split between male and female teams. Occidental’s 2017 Equity and Athletics Report, published Oct. 12 in accordance with the 2008 Equity in Athletics Disclosure Act (EADA), covers the 2016–2017 fiscal year. The EADA report stated that the football team received $455,505 in revenue, which is made up of institutional support, donations, ticket sales and any other revenue that can be attributed to intercollegiate athletics. This revenue was greater than what any other men’s or women’s sport received, including men’s track and field and cross country combined, which received $246,360 for the same period. In terms of respective roster sizes at the beginning of the 2016 season, the football team had 63 players while the men’s track and field and cross country teams combined had 77 players.

The second point highlighted unpleasant interactions between the team and Hoffman, specifically the meeting between Hoffman and the team Sept. 14 when she informed the team that their Sept. 16 game against Pacific University would be canceled.

It is disputed whether players were disrespectful to Hoffman at this meeting. Cushman sent an email to the football team the night of Sept. 14 referring to the meeting with Hoffman, reprimanding the team for reactionary, abusive and disrespectful behavior. According to an anonymous* alum, an unspecified number of football players shouted an expletive at Hoffman when she informed them that the college canceled their game. The Title IX complaint stated that Hoffman mischaracterized the players’ questions at this meeting as disrespectful.

While Greaves said the meeting was intense and William Grossman (sophomore), a linebacker, said it left some players in tears, both said that the team’s questions and conduct were not disrespectful. According to Greaves and Grossman — and included in the complaint — Hoffman confronted the team at a Saturday practice Sept. 16 and berated them over their behavior.

The complaint stated that Hoffman’s actions were a personal campaign to inflame the community against the football team. Grossman said the Title IX complaint is also a response to the mistreatment of football players by the Occidental community.

“The idea is that there has been a systematic pattern of mistreatment of football players here, whether it’s [by] students [or] the administration — and, quite honestly, we’re students just like anyone else,” Grossman said. “Just because we happen to wear pads and hit people on a Saturday doesn’t make us, we feel, any different than anyone else here.”

According to Greaves — who said that he has not seen the text of the Title IX report — the lawyers who drew up the complaint did not talk to him directly, but the complaint represents the team’s experiences.

“The information and details inside of the Title IX report were from the perspective of us as players and what we’ve heard and seen and have been through because the lawyers consulted us,” Greaves said. “They talked to us. So it wasn’t like they’re not a part of the program and they’re just, you know, typing away, not knowing anything.”

The Occidental Weekly reached out to Hoffman and Cushman multiple times to discuss the Title IX complaint, but neither was available for comment at the time of publishing. According to Jim Tranquada, director of communications and community relations, Myers’ statement will be the only college response on this Title IX complaint.

*The Occidental Weekly granted the alum anonymity to protect against employment retribution.

Update: This article was updated Oct. 20 to include clarification regarding O’Neal and Greaves’ statements.