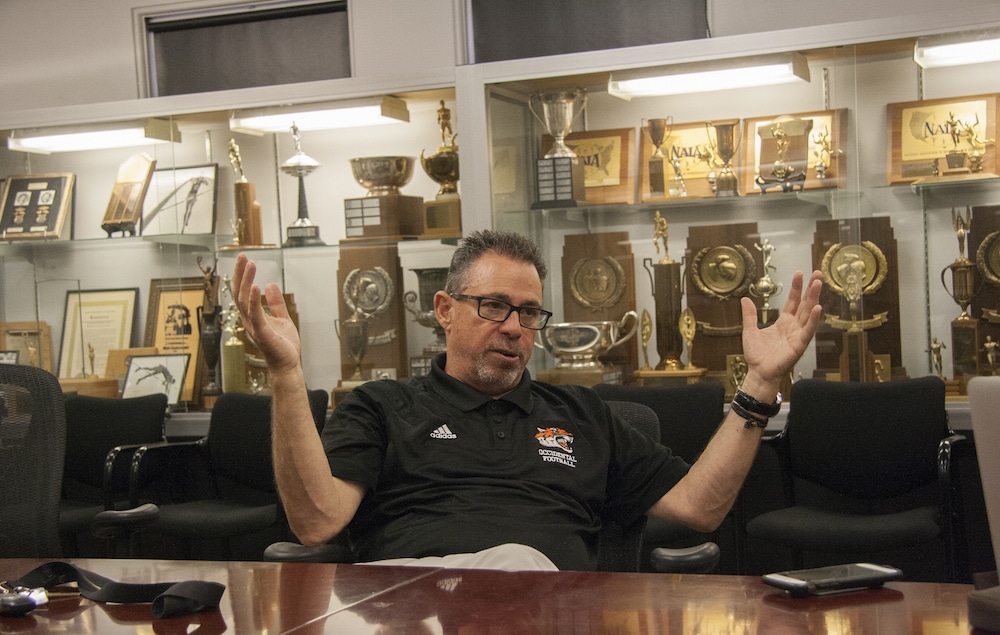 A 16-member task force issued a recommendation Jan. 20 that Occidental continue to field and support its football team, contingent upon successful recruiting and fundraising efforts. President Jonathan Veitch concurred with the task force’s statement Jan. 26, and the Board of Trustees supported his decision at a regularly-scheduled board meeting the same day. The board will review a follow-up report at its meeting April 23 to check on the progression of the program’s recruiting and fundraising, according to Associate Vice President of Marketing and Communications Marty Sharkey.

President Veitch announced via campus-wide email Oct. 13 that he had canceled the following day’s Homecoming football game because the team’s shortage of players put the remaining athletes at high risk of injury. In the same email, he said that he was in the process of constructing a task force to make a recommendation on the future of the football program. He canceled the remainder of the team’s season Oct. 17, citing the team’s depleted roster.

The roster and safety concerns were at the center of the discussion when the task force convened Jan. 19–20 in the Cushman Board Room, according to Sharkey, a non-voting member of the task force. The committee was comprised of two non-voting co-chairs, Sue Bethanis ’82 and Bill Davis ’80; two current students, including one football player and one student government representative; two alumni of the football team; two trustees; four professors, two of whom were Southern California Intercollegiate Athletic Conference (SCIAC) representatives; two ex-officio, non-voting senior administrators; two voting senior administrators; and two head coaches of other sports. Davis said that the members’ diverse perspectives guided the task force to a balanced and fair recommendation.

“I’m a big believer in pulling in perspectives and expertise from a broad spectrum of opinions,” Davis said. “So utilizing a task force, it doesn’t guarantee a good outcome, but I think it improves the chances of a good outcome, and particularly if you have someone like Sue Bethanis leading the process.”

Davis said that Bethanis, who is the CEO and founder of the high-tech consulting firm Mariposa Leadership, led the task force’s decision-making process. Sharkey said that the task force met from 9 a.m. to 5 p.m. on the first day, listening to expert presentations and analyzing relevant data.

The presentations covered diverse topics, including coaching methods and tactical choices designed to decrease players’ risk of injury, recruiting, Title IX compliance and concussion science, according to Sharkey and Davis.

“Safety was obviously a question on a lot of people’s minds,” Sharkey said. “Through the discussion over the course of the two days, concerns that people had about safety were largely addressed.”

According to Sharkey, presenters included football head coach Robert Cushman, Occidental football alumnus, task force member and former NFL player Vance Mueller and neurologist and University of Michigan professor Steven Broglio. Cushman said that he discussed the coaching measures he has taken to ensure safety, emphasizing keeping players’ heads out of contact in tackles. Broglio videoconferenced into the meeting to give a presentation on concussions. According to task force member Micol Garinkol (junior), he answered many of the concerns that members had about concussions in football.

“I think his perspective, his information, swayed a lot of people in the direction of not considering head injuries to be their main deterrent from supporting football,” Garinkol said.

Davis said that the task force took an unofficial vote at the end of the first day.

“At the end of the day, and I don’t think this is going into too much detail, we took what we called a ‘pulse’ just to see where everybody was, and at that point the overwhelming majority of the people were undecided,” Davis said.

The second day’s meeting, from 8:30 a.m. to 4:30 p.m., consisted primarily of discussion between the members of the task force, according to Sharkey. Davis said that while members disagreed on some points, they remained respectful and worked to come to a consensus.

“There was a rigorous and I would say even spirited discussion but it was also one where there was always the presumption of good faith, and a level of collegiality was always maintained,” Davis said.

According to Sharkey, Cushman’s confidence in his recruiting ability was one factor that swayed some of the members to support the football program’s continuance.

“The roster has had around 60 people for the last number of years, so I think people felt like if we were in that range of 55 and the right depth at position comes in, then you’re in a fairly comfortable area,” Sharkey said.

In addition to recruiting enough players to field a competitive team, the task force recommended that the football program receive a significant increase in outside funding. Sharkey said that while he could not provide an exact target number for this increase in financial support, he expects that the goal is above $100,000.

Cushman and Sharkey said that Mueller will use his influence as a former NFL player to lead efforts to raise funding from alumni.

“Vance’s role is critical in terms of getting the alumni group, because there is a strong alumni group that does care about the team, and we’re in a position now where we need their support,” Cushman said. “And I want them connected, I want them included.”

The two students on the task force, Garinkol and Joey Garza (junior), had different perspectives on the outcome of the task force meetings. Garinkol said that she voted against the continuance of the football team.

“The recommendation that was presented to the board, I was a minority in, so I did not vote to support the continuance of the team,” Garinkol said. “And it is my opinion that the plan that we made to go forward, that the board approved of, isn’t a sustainable one, and I don’t think it’s gonna be one that’s gonna result in a competitive team in the next few years, and you’ll see another committee in the next few years to solve that.”

Garza, a football player, said that he is happy that the historic program will live on.

“I think football is part of the Oxy community,” Garza said. “I think its 124 years of it being on campus, being a part of the school and, you know, we’re in a tough time right now, but I think we can bounce back and hopefully become a positive part of campus again.”