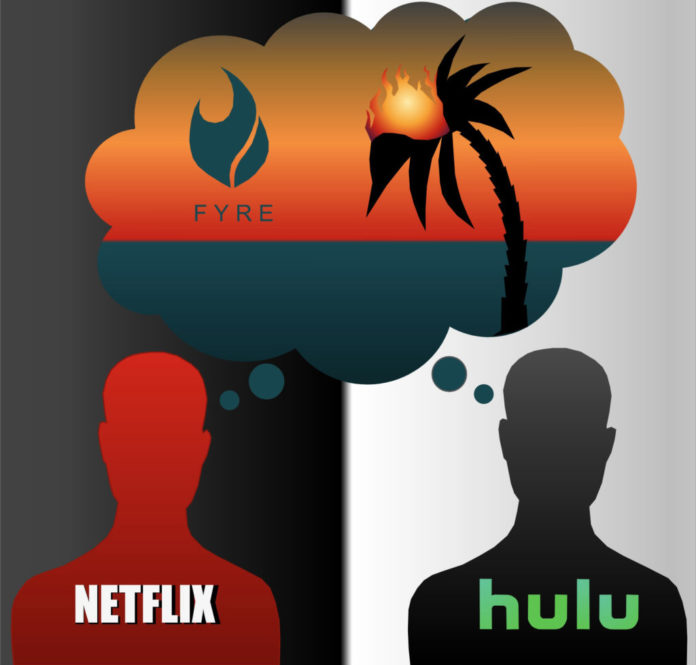 Capitalizing on a hot topic, Netflix and Hulu released two separate documentaries in response to the Fyre Festival disaster. Netflix’s “Fyre” and Hulu’s “Fyre Fraud” cover the hotly-discussed disaster on the Bahamian island. Viewers, including myself, were left stunned after learning new information on just how everything went down in flames behind the scenes.

For those who have yet to hear about this event (and the incredible memes that followed), let me catch you up to speed. In 2017, entrepreneur Billy McFarland teamed up with rapper Ja Rule. Their goal was to create “The Coachella of the Bahamas,” a music festival on a private island full of luxury amenities and the world’s most popular singers and influencers. They released a promo video, full of some of Instagram’s biggest stars like Kendall Jenner and Emily Ratajkowski. The real claim to fame, however, was that the island was previously owned by Pablo Escobar, the Colombian drug lord. Tickets quickly sold out and McFarland began his mastermind scheme. Fast forward several months later, and not much had happened on the planning end of the festival. McFarland defrauded millions through wire transfers, and customers showed up to a very disappointing site.

In my professional opinion, each documentary held strengths in different categories, but Hulu’s “Fyre Fraud” was the strongest. It had hard-hitting statistics and chilling interviews with McFarland himself, while the Netflix documentary “Fyre” only focused on the buildup and failed to present the aftermath. Rotten Tomatoes may have given a higher rating to the Netflix documentary — with “Fyre” receiving a 92 percent “Certified Fresh” rating and “Fyre Fraud” receiving only 76 percent — but this only proves that your average consumer appreciates a dramatic storyline with touching interviews, in comparison to a more nitty-gritty, factual unveiling of a scandal. While dramatic documentaries may lead to better reviews, viewers can only get the full picture from documentaries that focus on the facts, just as “Fyre Fraud” did.

“Fyre Fraud” did the best job of cracking down and personally exposing McFarland for the criminal that he is, both in the documentary and on-the-spot in his interview. When questioning both the media team and McFarland, interviewers did not stop until McFarland left the room out of discomfort and the media team admitted that McFarland was going to jail. In contrast, Netflix’s “Fyre” simply pictures the media team as confused, betrayed employees — but “Fyre Fraud” exposes the dirty laundry by convincing them to admit that technically, everyone involved was guilty.

As an avid documentary watcher, I am here for the uncomfortable and raw interview sessions that allow us, as viewers, to dig deeper into the issues at hand. Up-to-date interviews like the ones in “Fyre Fraud” keep viewers engaged, leaving them in suspense as to what will happen next — and more importantly, they give us a glimpse of the situation as it really unfolded. Though many viewers may believe “Fyre” was more exciting, the severity of the interviewers’ questions and the media team’s dramatic admission in “Fyre Fraud” prove that even the nitty-gritty can be fascinating and entertaining.

Rumor has it that Netflix also had Fyre Festival’s media team, Jerry Media, sponsor the making of “Fyre.” The intrigue of the scandal, as well as the fact that Jerry Media runs a popular meme account, likely added to the documentary’s popularity. But it also calls the accuracy of “Fyre” into question: since the media team partially responsible for the scandal may also have been involved in creating the documentary, it’s not surprising that “Fyre” omitted the most damning evidence of McFarland’s guilt. Nobody likes a shortcut, especially when that shortcut is made to cover someone’s tracks.

My advice to any curious youngster out there looking for a solid exposé is to watch Hulu’s “Fyre Fraud.” Although it lacks the same “wow” factor as “Fyre,” it exposes criminals, tells the facts and leaves you dying to call the federal prison just to interrogate McFarland. For my fellow mystery junkies out there, I promise you will not be disappointed. On a broader note, the comparison proves that accurate news is more valuable than scandalous, semi-factual entertainment. Whether you’re a newbie or a doc connoisseur, advocate for news outlets that will give you the hard facts while allowing you to dig deeper for answers yourself.

Haley Jones is an undeclared first year. She can be reached at jonesh@oxy.edu.