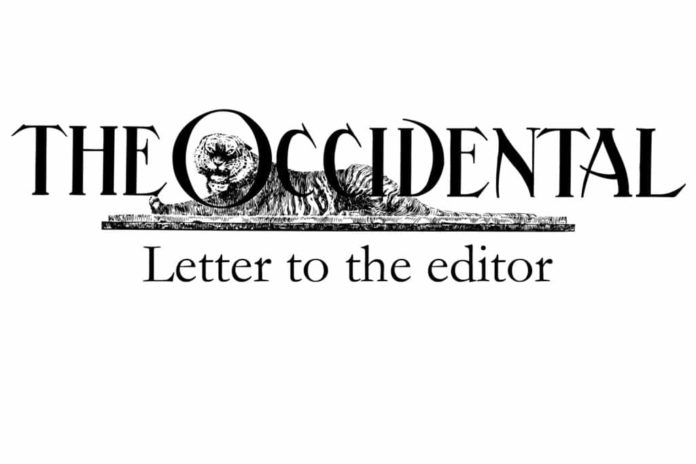 It is time to divest from Israeli apartheid, and to join other colleges and organizations that have taken a stand against violent, discriminatory policies in Israel. Oxy had the opportunity before to demand justice — and it failed. While the college boasts of former student Barack Obama’s role in the South African divestment movement, it conveniently chooses to ignore its decision to continue profiting from South African apartheid. Today, we have the hindsight to understand that we failed Black South Africans; let us not do the same to Palestinians.

Apartheid, the Afrikaans word for “separateness,” is a crime under international law. It is “committed in the context of an institutionalized regime of systematic oppression and domination by one racial group over any other racial group…and committed with the intention of maintaining that regime.” In South Africa, violent policies expropriated land from Black South Africans, removed them from their homes and outlawed Black ownership of land. Black South Africans were forced to carry “pass books” when travelling through white areas and 3.5 million were displaced from their homes to live in Bantustans, establishing residential segregation.

At the same time, according to a pamphlet in Oxy’s Archives, a fifth of Occidental’s investments provided financial support for South African apartheid. Oxy faculty twice voted to end those investments, and students protested and demanded better from the school. The board of trustees and Oxy administration denied those demands. They argued, as documented in The Occidental in 1978, that divestment would negatively affect Black South Africans: “The maintenance of trade and economic relations… enables companies doing business in South Africa to contribute positively to the economic and social welfare of those persons and groups who are the victims of apartheid.” Black South Africans issued a call for divestment, and we were in no position to dictate the “right” approach to ending their suffering. This reeks of white saviorism, but many use this justification against divestment today.

The college also would not divest from South Africa, because its role is to maintain “a superior educational institution,” and it would be “morally… irresponsible if we… were to adopt an investment policy that would… almost inevitably produce inferior investment results” according to another issue of The Occidental from 1978. As an Oxy student, grounded in our mission’s values of community, service and equity, I am disgusted that the college saw our education, as privileged students at a Western institution, as more important than the lives of Black South Africans. An education that refuses to respect basic human rights is not “superior,” it is reprehensible.

Today, many question whether Israel’s policies parallel apartheid in South Africa. Last week, Josh Schapiro refuted that idea on the basis that Arab students are admitted to Israeli universities. Admission, however, does not remedy that twice as much money is allocated to Jewish students than to Arab students. Israel’s Hafrada policies, the Hebrew word for “separation,” directly mirror the policies of South Africa. Prime Minister Benjamin Netanyahu stated proudly that “Israel is not the state of all of its citizens… Israel is the nation-state of the Jewish people — and of it alone.” The recent Nation-State law codified this discriminatory treatment. If you are interested in learning more about Israeli apartheid, Students for Justice in Palestine will be hosting discussions during Israeli Apartheid Week.

Apartheid in South Africa was upheld by international companies, and many of those companies do the same in Israel today. Hewlett Packard provided computer systems to the apartheid regime in South Africa. Today, it sells technology that underpins the Identity Card system in Israel, separating people based on whether they are “Jewish” or “Arab.” HP also provides infrastructure used to uphold mass incarceration, mass deportations and domestic surveillance in the US today. Similarly, G4S equips Israeli prisons holding Palestinian children, and helps run Israeli checkpoints and police training centers — it is worth noting that U.S. police forces are often trained in these centers. Racist violence is not unique to Israel; these companies profit from the subjugation and murder of marginalized communities globally.

Colleges invest their endowments into companies like HP and G4S, and benefit from the profit margins made by upholding oppressive states. Many have revoked their support for apartheid in Israel, but Oxy has not. We cannot claim to be an institution of diversity and equity while funding the decimation of Black and Brown communities globally. We must hold our administration accountable and be clear: an education that comes at the cost of another’s life is no education worth having.

In 2005, Palestinian civil society issued its call to the international community to Boycott, Divest, and Sanction (BDS) Israeli apartheid and companies complicit in it. Established as a non-violent means of resistance, it echoes calls from Black South Africans to divest from an increasingly violent and repressive state. Palestinians chose BDS not only for its success in South Africa, but because there are tangible parallels between the two states’ policies. The BDS movement does not take a political stance on statehood, but appeals to the basic human rights of all people. It calls for Israel to respect three principles of international law, and Oxy should make that same call:

Oxy has not only failed South Africa and Palestine. During the Fossil Free Oxy movement, Occidental repeatedly maintained that it does not “direct control over or day-to-day knowledge of how [76 percent of the college’s endowment] is invested” and could not divest from fossil fuel. That lack of transparency is chilling. Miraculously, though, Oxy rightfully divested from military-style assault rifle manufacturers after the Sandy Hook massacre. This raises questions about Oxy’s control over investments, and moreso, why it is only able to control those investments when it comes to American lives.

Frankly, I am embarrassed that a school professing to care about the public good and create engaged citizens fought furiously to continue investing in the South African regime and continues to fight against boycotts of Israel. We should all be ashamed. While other schools and organizations take a stand, Oxy remains silent; it “has chosen the side of the oppressor.” Our education was not worth more than the lives of Black South Africans, and is not worth more than the lives of Palestinians. BDS is working, and when Palestinian liberation is achieved, I do not want to look back at my school with the shame and embarrassment I feel looking back to South Africa. Today, we have a chance to be on the right side of history; it is time to divest from Israel.

This article was authored on behalf of Students for Justice in Palestine at Occidental College. SJP is part of a larger movement of solidarity with Palestinians, advocating for the end of the occupation and colonization of Palestinian land by Israel, recognition of the fundamental rights of Palestinian citizens of Israel, and the right of return for Palestinians and their descendants displaced from their homes since the Nakba.