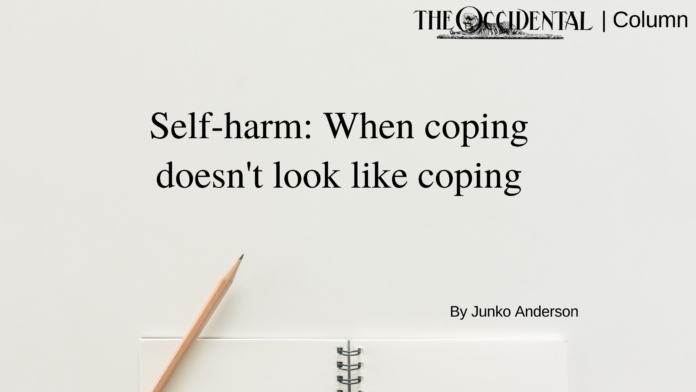 Trigger warning: discussions of self-harm and a brief discussion of suicide. There are resources listed at the bottom of this article should you need support.

I know objectively that mental illness affects people of all backgrounds. But sometimes, I still feel ridiculous that at the ripe old age of 20, I’m still exhibiting what I consider emo 13-year-old behaviors — namely, engaging in non-suicidal self-injury (NSSI), more casually known as self-harm. I’m part of the 15–20 percent of teens and young adults who engage in NSSI at some point in their lives. I find that number comforting because oftentimes I feel like I should have outgrown this particular coping mechanism. But mental illnesses and their manifestations aren’t more or less legitimate because of your age or background, and unfortunately, they can appear in just about anyone.

You probably know someone with a history of NSSI, or have engaged in it yourself. Despite how common it is, NSSI remains largely misunderstood. The common description of self-harm as “a cry for help” is far from a universal explanation for NSSI behaviors, as there are many things people may be seeking through NSSI that are not necessarily social support. NSSI can be a confusing and daunting topic, often outright frightening to face in person. Even as someone who has lived with NSSI for nearly a decade, others’ self-injurious behaviors still scare me.

I, like many other people, have been told in workshops, by professors, and in well-intentioned media that self-injury can be a sign that someone is at risk of suicide, so that’s my first thought when I learn of someone’s self-injury. However, as the name non-suicidal self-injury says, not all self-injury leads to or is an indicator of suicide. If you are worried about someone being potentially suicidal, don’t be afraid to use the word “suicide” when expressing your concern and helping them find support. Using the word “suicide” does not plant the idea of it in someone’s head — it shows individuals who are suicidal that you won’t look away from their struggles.

Support for non-suicidal people who engage in self-injury may look a little different than support for individuals struggling with suicidal thoughts, and giving it can be challenging, as the urge to take drastic measures to stop someone from NSSI may make it difficult to remain calm. Should you ever be in the position of supporting someone who engages in NSSI, there are a handful of things to keep in mind.

For one thing, that person is most likely aware that NSSI isn’t seen in the most positive light. This can bring them feelings of shame because of the stigma associated with NSSI. It can also make them feel guilty because they know NSSI makes their loved ones anxious or worried. That’s why it is important to support them without judgment or centering your own discomfort and accept that, at least for the moment, NSSI is part of their experience. Trying to reject and change this reality in which NSSI is present can create more feelings of guilt, shame or even resentment.

It can be confusing trying to pinpoint why people self-injure if NSSI causes both physical and emotional harm. The truth is there is no one catch-all explanation, and people may not even have an explanation at all. For many, NSSI can be a release, an attempt at communication or simply an indomitable compulsion. Some also characterize their NSSI as addictive, even if they do not enjoy their NSSI behaviors. The reasons which may have initially prompted someone to begin NSSI may not be the same reasons they continue.

Many people do overcome NSSI. However, it is important to acknowledge recurrences of NSSI. Healing is not a linear process, and expressing disappointment when someone reengages with NSSI helps no one. Instead, consider reminding the person of how long they went without engaging in NSSI and reassuring them that one recurrence does not invalidate the strength they show in resisting NSSI.

NSSI is ultimately many, many things. It gets us by, it makes us feel worse, it affects those around us, it excites us or it scares us. Whatever the particulars of the NSSI you or the people you care about experience, remember that there are resources and that no one is ever worth anything less for having engaged in NSSI.

The author for this piece is Junko Anderson, a member of a chapter of the organization at Occidental College. Active Minds is a national organization that aims to reduce the stigma surrounding illness and promote good mental health.