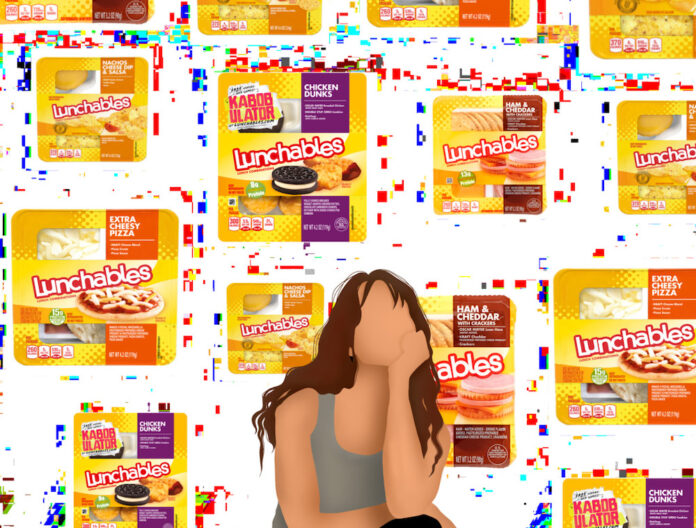 I wasn’t allowed to have Lunchables as a kid. This doesn’t mean I’d never tasted one. In elementary school I’d lean over the blue-latex-covered lunch tables, stealing bites of pizzas and leftover nacho chips, offering pieces of avocado maki or a baby carrot in return. I never got to have more than a bite, nor the satisfaction of making up the little pizzas or cracker stackers myself. To have an entire one all for myself was something I couldn’t even dream of.

A decade or so later, I found myself standing in the Eagle Rock Target lunch meat section, staring at the little boxes in front of me. I told myself I would buy one — something I’ve told myself hundreds of times, practically every time I saw them in the case. But this time, I didn’t walk away. I took it off the shelf, and after many glances down at the little yellow box in my basket wondering if I should put it back, I bought it.

It was a victory. My inner child was reeling in excitement, and it felt like she took over. I peeled the soft cheddar cheese apart as I’d always watched the other kids do and stacked up the ham and cheese on the buttery Ritz cracker.

Emotionally, it was delicious. Objectively, it wasn’t half-bad. I think water-packed ham is one of humanity’s greatest inventions and Ritz crackers were my snack of choice as a child. The cheese sucked. It was meant to be cheddar, but had the texture of too-soft American cheese and coated my mouth with a slightly oily film. I still ate most of it though, and I don’t think a “proper” cheddar would’ve worked alongside the cracker and ham provided –– you need the strange flavor to make it taste right.

Eating a Lunchable as an almost-20-year-old shouldn’t be a big deal, but for me it was. I’ve had a small disposable income since my early teens and the freedom to do with it as I wished. But in all that time, I would look at Lunchables and other snacks and tell myself “you shouldn’t buy that.”

I wouldn’t have even thought twice about my habits if I veered away from all unhealthy foods, but what was it about Lunchables in particular that made me stop right before reaching out and grabbing one?

I grew up with what is most often recognized as a “crunchy” diet. With a heavy emphasis on organic and whole foods, I spent every Sunday waking up early and going to the farmers market with my parents, pushing a cart full of fresh bread and produce. Snacks and treats were always allowed — everything in moderation — but I did acquire a genuine love and appreciation for vegetables and “healthy” foods.

Talking with friends about my personal achievement, there was a common response of confusion among many of them. From some, a simple “ew,” and from others, confusion as to why I was trying them just now. In general, they were seen as a thing of the past — gross, unhealthy or simply just not something to be eaten as an adult.

But I think it was being an adult that made my purchase of that little cracker-stacker impactful.

The onset of complete personal autonomy is central to the idea of growing up. College, at least a residential one like Occidental, allows us to ease this transition, letting us have full control over what we do with our time, but without worry for the complications of paying rent, buying furniture and most importantly having to fit time into the day to figure out what to cook, and then actually cooking it. It’s much easier to eat healthily in these spaces too because you don’t have to worry about dealing with unfamiliar ingredients or trying to perfect a recipe. The food is there in front of you, ready to be enjoyed.

And then that stopped. And for the current student body, it stopped early, with little warning. No longer could we just take a five-minute saunter to the Green Bean for a midday pick-me-up. Pre-made food options remained, but many of us who returned home to our parents or took this opportunity to move out recognized the money and life-saving importance of eating at home.

And for many of us, health came to the forefront. Discussion of nutrition, workouts and the “quarantine 15” filled our feeds, and the focus on food and consumption increased, both positively and negatively. We desired control in what we consume when we lost control over so much else in our lives.

I’ve always been cognizant of the food I buy beyond just the identity of the item — looking for fresh, quality foods. I want to treat my body well, in a way that respects what it does for me. So when I walk into a store and look at a Lunchable, my natural response is, “I could make that, and I could make it ‘better for me.’”

But when I sat in my car and ate that Lunchable, the experience wasn’t one that I could’ve made for myself in a kitchen. I wouldn’t be overcome with childhood nostalgia if I ate large slices of organic ham and crackers and a quality cheese that wasn’t so processed. I wouldn’t have the same satisfaction of having it all laid out in front of me in the familiar sectioned plastic packaging. I’m not really eating it to honor my body, or even my tongue; I ate that Lunchable to honor my ability to do what I want.

Part of having your own autonomy is always going to be about trying to make the best decisions for yourself. But more importantly, autonomy allows you to take care of yourself — and that doesn’t always mean doing the textbook-best or healthiest thing for you. Sometimes it means doing the things that are the most fun for you. Modern society has encouraged us to constantly hold ourselves back, to constantly control everything we do. Look at any guide to being a billionaire and we see the intense regime that is paraded as the key to success. I want you to allow yourself to indulge, allow yourself to actively ignore the rules and regimes you put in place for yourself and remind yourself that in an ever-restricted world, you can still do whatever you want.

Use food as a way to step into your autonomous, adult self, not just by doing what is “best” for you, but by indulging the child within you who stared down the long lunch tables with longing. It doesn’t have to be Lunchables, or even something unhealthy; it can just be that one thing you always want somewhere in the back of your mind.