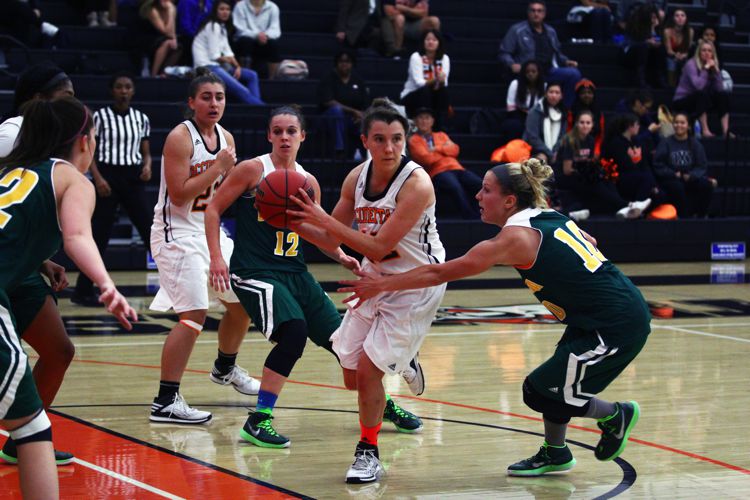 For the Occidental women’s basketball team, the upcoming season is all about “dominating the moment.” With seven returning upperclassmen, an excited group of first years and a team focus on chemistry, the Tigers are primed and ready for an outstanding season.

Though their first game is less than a month away, the team already has a scrimmage under their belt and head coach Anahit Aladzhanyan, known as Coach Heat, is looking forward to the upcoming season.

“Preseason thus far has gone pretty well. We have been going for about two weeks now, so there is a lot that we are putting in right now, which can be a little overwhelming for our younger players, but I am really, really excited,” Aladzhanyan said.

Preseason, comprised of exhaustive hours on the court and in the weight room, has not only physically prepared them for the season ahead but has also helped the first years to integrate into the team culture. Kendahl Wallis-Lang (junior), a forward from San Jose, Calif., feels that the time spent on and off the court with the first years has facilitated a relationship that will lead to good chemistry on the court.

“Both playing style and personality-wise we love all of the [first-years], and they are all fitting in really well,” Wallace-Lang said.

Emily Leonard (first year) acknowledged the effect the team’s inclusiveness had on her transition into college basketball.

“I’ve had a very positive experience being part of the team, the returning players are very inclusive and welcoming, which made transitioning into college basketball much easier,” Leonard said via email. “The pace of the game is definitely much quicker and all of the players are incredibly talented, so I’m still working on adjusting to the new level of competition.”

The team has been improving over the past few years and looks to continue their upward trend. In their 2014–2015 season, they were 4-21 overall and 2-14 in SCIAC. Last year, they were 10-15 overall, and 6-10 in conference play. This year, the team hopes to build off of its incremental success according to Dru Ishibashi (junior).

“There has just been such a huge improvement from my freshman year to last year,” Ishibashi said. “Hopefully we can keep improving at that level and become a better team, and create a new culture, and set our expectations higher and meet those expectations.”

One major strength this season is the team’s internal leadership. The three captains, Erin Matsumoto (senior), Grace Baranowski (junior) and Nicole Pelletier (sophomore), are all determined to have a successful season and set an example for the younger players. Baranowski, who will be leading from the sidelines after an ACL tear this summer, vocalized her commitment to being a good teammate and captain even though she can’t be on the court with her teammates.

“It’s been really hard coming to terms with the fact that I won’t take the court with my teammates this year, but for me I have chosen to look at this as a great learning experience,” Baranowski said via email. “I will be challenged to be a better teammate and leader because of my inability to play, and while it will be really hard, I am looking forward to the opportunity for personal growth that this year will offer me.”

Baranowski, who averaged 8.4 points and 5.9 rebounds per game last year, was one of the key players for the Tigers. Though Baranowski will be watching from the sidelines, she added that Matsumoto, who averaged 12 points per game last season, will have a significant impact on the squad this year.

“I am really looking forward to watching Erin continue to grow as a leader and player this season,” Baranowski said via email. “This is her last season, and I can see that every day she steps onto the court she is working towards winning a SCIAC Championship, and I can’t wait to see her, and our entire team, fight for that opportunity.”

With the addition of a solid first-year class, and an already strong work ethic, the team’s goal of making it to into the top four in their competitive conference seems feasible. After finishing sixth in the conference last year, two spots away from the playoffs, the goal seems attainable. Their team slogan, “dominate the moment,” describes their strategy to focus on each play, working to improve possession by possession.

The Tigers open their season Nov. 15 at home against Cal Miramar at 7:30 pm. Follow their journey on Instagram @oxywbb.

Women’s basketball is about dominating the moment