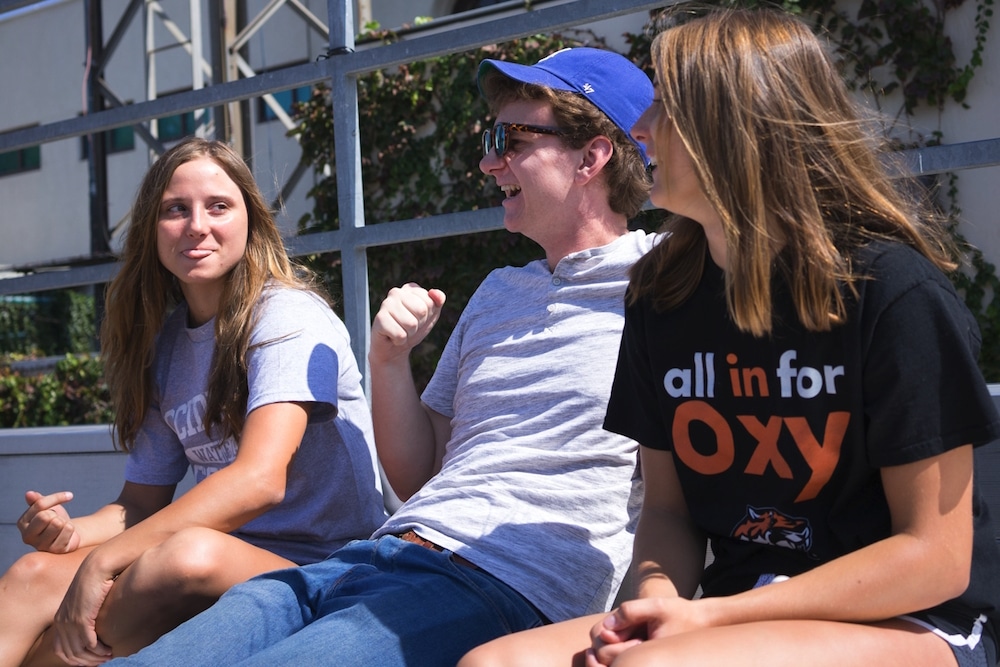 Whether it is waking up early for a 6 a.m. practice, balancing classes with workout times or playing under the lights in a home game, some experiences are exclusive to student athletes. According to Isabelle Dunne (senior), a runner on Occidental’s track team, student athletes share a bond unlike any other on a college campus.

Both Dunne and football team member Josh Greaves (sophomore) mentioned Occidental’s status as a Division III school as a point of common ground among athletes on campus. According to Greaves, student athletes understand not only each other’s struggle to balance school and sports but also the competitive nature of athletics and their dedication to their respective teams.

“We’re playing Division III sports because we love the game,” Greaves said. “We are not trying to go to the next level or become professionals, but the one thing that we all know is that we have a passion for our sport and a passion for competition and I think that’s one thing that keeps us together.”

Jake Palumbo (junior), a member of the baseball team, feels that friendships between teams on campus form just like any other relationships on Occidental’s campus rather than because of any push from athletics.

“There is a sense of camaraderie between teams on campus, but I think it is because Oxy is a small, close-knit community that enables or facilitates the ability for people to meet in different spaces on campus,” Palumbo said.

Instead of relying on the athletics department to foster a sense of community amongathletes, students look to their captains to build relationships both within their own team and between other sports teams on campus, according to Greaves. Greaves also attributes the bonds between fall sports teams specifically to their training, which starts in August before other students move on campus.

“Because fall athletes all came to campus before other students, we were able to see the upperclassmen interacting with the other teams and that made me feel comfortable talking to and forming bonds with first-year athletes of other teams,” Greaves said.

According to Greaves, football has friendships with the women’s lacrosse and volleyball teams that have existed for years. The teams show their for support for each other by showing up to the other team’s games. According to Greaves, this is usually organized by team captains or instructed by their coaches.

The current ties between teams also depend on seasons as well as individual friendships between players that have formed out of classes and living in the same residence halls, according to Palumbo.

“Generally, the teams that are out of season oftentimes support the teams that are in season,” Palumbo said. “I think that baseball and men’s soccer are close in that a lot of players are friends from having classes together and knowing each other outside of athletics.”

According to Dunne, the track team is unique in that many team members are dual-sport athletes.

“I feel like that creates an interlock between different teams because we make a point to go support our teammates and the rest of their team when they are in their other season,” Dunne said.

Dunne, Greaves and Palumbo all agreed that a sense of camaraderie exists on campus, but said it is between all athletes on campus rather than between specific teams. All three also see space for the athletics department to take a direct role in forming and fostering bonds between teams.

Dunne serves on the Student Athlete Advisory Committee (SAAC). One of the initiatives SAAC is working on this year, according to Dunne, is to increase camaraderie between teams, which she said they have to do carefully. Last year, SAAC hosted a formal that was only for athletes to strengthen the relationships between student athletes on campus. In the process, they ran into issues with the event in that it was thought to be exclusive to the rest of the student body, according to Dunne.

“When we were trying to create the athlete formal, it almost felt like a double-edged sword because by creating a community for athletics, it was simultaneously excluding non-athletes, which was not the goal,” Dunne said. “There is a bond that athletes share but it is difficult to create that community without excluding other people.”

Intentionally forming this sense of camaraderie through events such as the athlete formal may be difficult, but according to Dunne, camaraderie is needed for student athletes who see it not just as a friendship but also as a support system needed for their respective sports.