Advertisement
Home Community News After a year of COVID-19, vaccines arrive in NELA 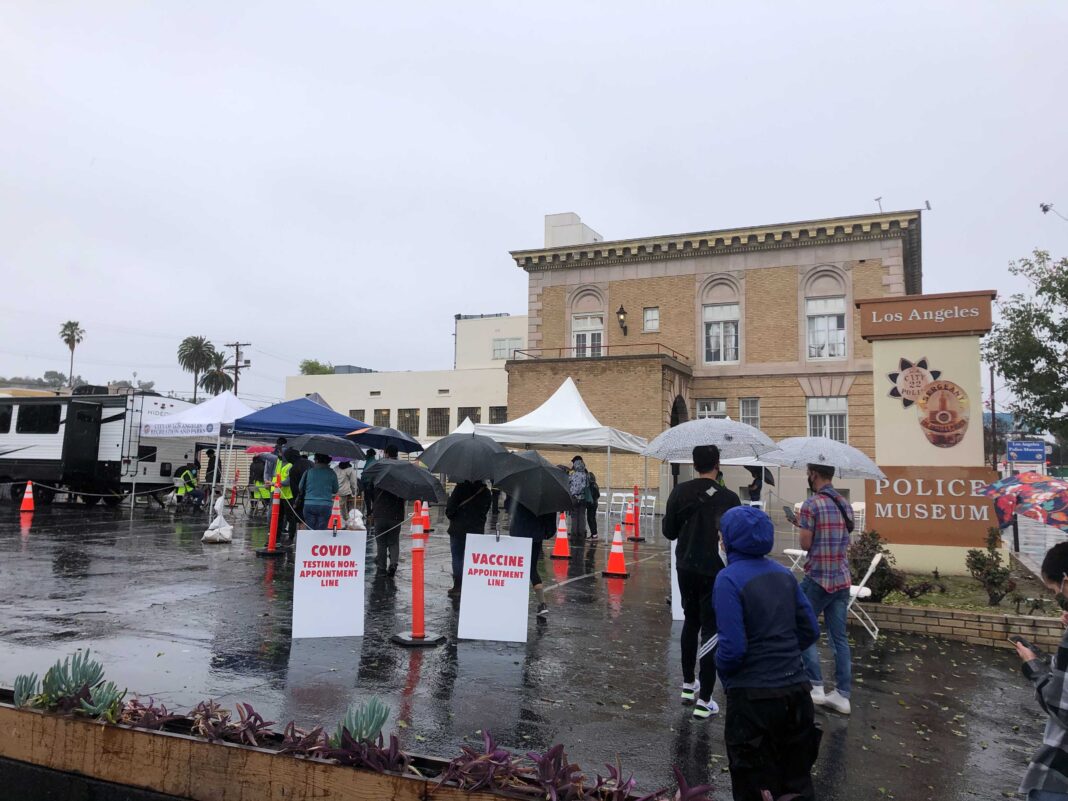 After a year of living with the coronavirus in NELA, eligible residents in CD-14 can now receive the COVID-19 vaccine at the Los Angeles Police Museum in Highland Park through March 6. Residents who are 65 years or older, locally employed essential workers, caregivers, educators and school staff, and city or county frontline workers can make appointments by calling or emailing the office of CD-14 councilmember Kevin de León. In order to secure a time to receive the vaccine, residents must provide proof of residence and eligibility, according to CD-14 receptionist Cynthia Castellanos.

COVID-19 cases, hospitalizations and deaths are trending downward following the winter surge, when LA became the global epicenter of the virus, according to data from the Los Angeles Times. The mobile vaccination site in NELA comes as the supply of COVID-19 vaccines nationally and statewide is expected to expand over the coming months. California began a transition March 1 to run vaccine distribution through healthcare provider Blue Shield in an attempt to streamline the rollout that originally ranked amongst the slowest in the nation.

Across LA County, approximately 12 percent of residents have been vaccinated, but neighborhoods with the highest COVID-19 case rates have some of the lowest vaccination rates, according to the Los Angeles Times. Black and Latinx seniors are trailing white and Asian seniors in receiving first doses, and the same patterns have been widely observed nationally in other major metropolitan areas including Chicago and New York City.

In NELA, a nearly identical, if not exaggerated, phenomenon exists where predominantly white neighborhoods with fewer cases have higher rates of vaccination, according to reporting from the Los Angeles Times. Pasadena and South Pasadena, which have lower case rates than NELA’s neighborhoods, have higher vaccination rates. South Pasadena, with a case rate of one in 21, has vaccinated one in six residents.

De León said he and his office are working to eliminate such disparities in COVID-19 vaccination rates. Mobile vaccine sites such as the one in Highland Park have also opened in hard-hit areas like Boyle Heights and Ramona Gardens, according to de León.

“Super sites, like Dodger Stadium and Cal State LA, will remain open and residents can check their eligibility to schedule their appointment,” de León said. “However, I really want to underscore the importance of really getting in the community and doing mobile sites, along with our clinics. We need the vaccines to come into our low-income neighborhoods because they’re the ones who are being devastated right now.”

De León said he has plans for a new vaccination site that will prioritize seniors, although he has yet to disclose the location. For de León, direct interaction with communities that have been impacted the most by COVID-19 is the most efficient way to get people vaccinated.

“At a mobile pop-up site in Boyle Heights, we went door to door asking folks who are eligible to get the vaccination to come out and get the vaccine right away,” de León said.

According to Medical Infectious Disease Director of the Coronavirus Task Force at Huntington Hospital Dr. Kimberly Shriner, the winter surge of COVID-19 cases in the area was unlike any event she has experienced in the medical field before.

“This was a whole different beast,” Shriner said. “In [Los Angeles County], the numbers just kept going up and up, and we came very close to having to implement a scarce resource policy, which is where you have to make decisions about which patient is going to get what.”

Shriner said now that case rates are falling, the next hurdle to overcome is getting everyone vaccinated amid considerable vaccine hesitancy. According to Shriner, there may be a variety of factors, including legacies of medical abuse or concern about legal status, that may be driving apprehension in some communities in LA.

“There is a certain amount of vaccine hesitancy in the African American community for understandable reasons, considering the history we’ve had in this country,” Shriner said. “The Hispanic community has been a very persecuted population, especially in the last administration with all the deportations and the immigration issues. So there’s some issues there like ‘If I go get a vaccine, does that mean they’re going to discover that I’m undocumented?’ And the answer is no, because we don’t ask those kinds of questions, but those are the things you have to address.”

Nicole Vick, a public health professor at Occidental College, said inequity in access to medical and health resources is a concern that public health stakeholders have been grappling with before the pandemic.

“I think it’s something that we worry about in general, in regards to population health. Like, ‘Hey, are we making sure that we are really reaching out to those populations that are most vulnerable and bringing them in?’” Vick said.

Shriner said working at the community level is the most impactful way officials can combat current disparities in vaccination rates. Local officials and organizers are able to better understand the needs of their communities such as a lack of internet access or language barriers.

“Maybe going to the hospital to get the vaccine is more frightening for some communities than going to a church where they know all the people there, or at a school or at a community center,” Shriner said.

According to CA-34 Congressman Jimmy Gomez, in an effort to further dismantle inequity in vaccine access in LA as well as nationally, Federally Qualified Health Centers that target marginalized communities have been instrumental in distributing vaccines to disadvantaged individuals. 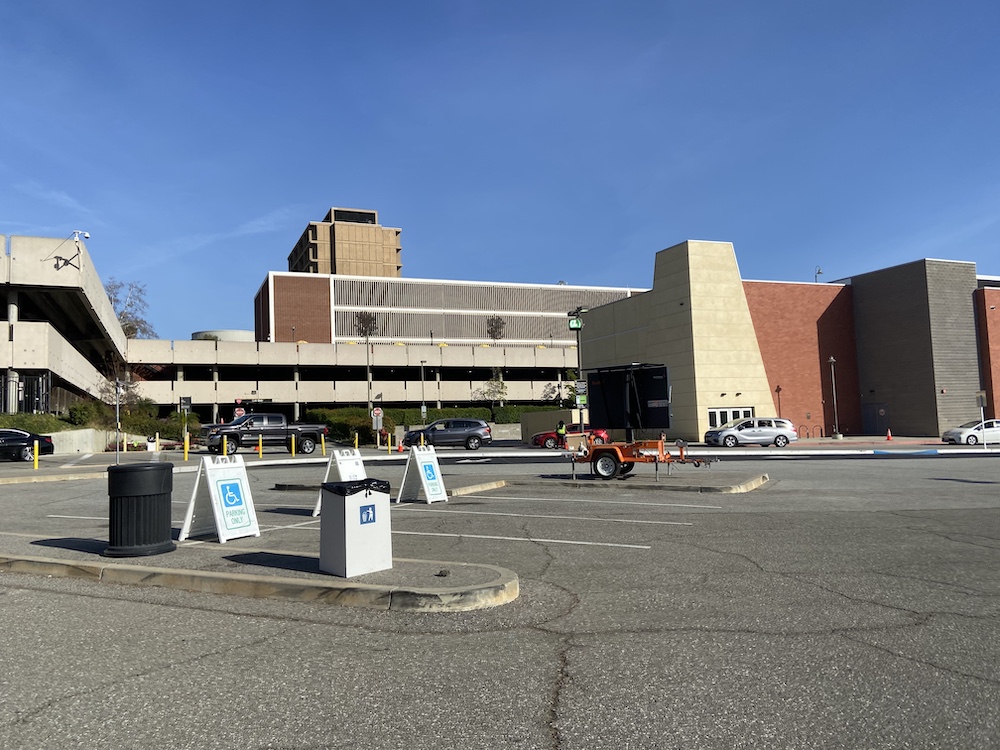 “That’s going to be a big deal because these folks are low income, often on public transportation, often don’t speak English to a level necessary to be able to fill out paperwork and so forth,” Gomez said. “Targeting these vaccines to the community health centers is to help with the issue of equity, but there’s still so much more to do.”

Gomez said his approach to figuring out what relief is needed in response to COVID-19 has been to continuously work on the ground directly with members of the community.

“From food, to loans for small businesses, to help with rental assistance, to stimulus checks — it’s all been based on the interaction I had with constituents, and that’s what is going to continue to be; firsthand interaction that will [continue to] guide my policy priorities in Congress,” Gomez said.

The Food and Drug Administration (FDA) approved a one-dose COVID-19 vaccine produced by Johnson & Johnson (J&J) Feb. 27 for emergency use, which joins the current Pfizer and Moderna vaccines approved by the FDA in December.

According to Shriner, many infectious disease experts were surprised by the effectiveness of the first two vaccines. She said the lower but similar efficacy rate of the J&J vaccine in comparison to the ones from Pfizer and Moderna may prompt people to refuse the J&J vaccine, despite offering similar immunity.

“Really, none of them are better or worse than each other,” Shriner said. “They’re [all] equally effective, and, in fact, the Johnson & Johnson one has some advantages. It’s only one shot and [has been] tested during the emergence of these variants.”

Shriner said that herd immunity — a level of immunity among people that is higher than the infectivity of the virus — must reach about 75–80 percent for pathogens as infectious as SARS-CoV-2, which causes COVID-19, to stop circulating.

“The point of herd immunity is to protect the people who either don’t get vaccinated or who don’t respond to vaccines,” Shriner said. “It’s a challenge to get there, but now, because [SARS-CoV-2] is so infectious and because so many people have had it, we actually might get there a little sooner than many of us thought.”

Zach Goodwin contributed to the reporting of this article.