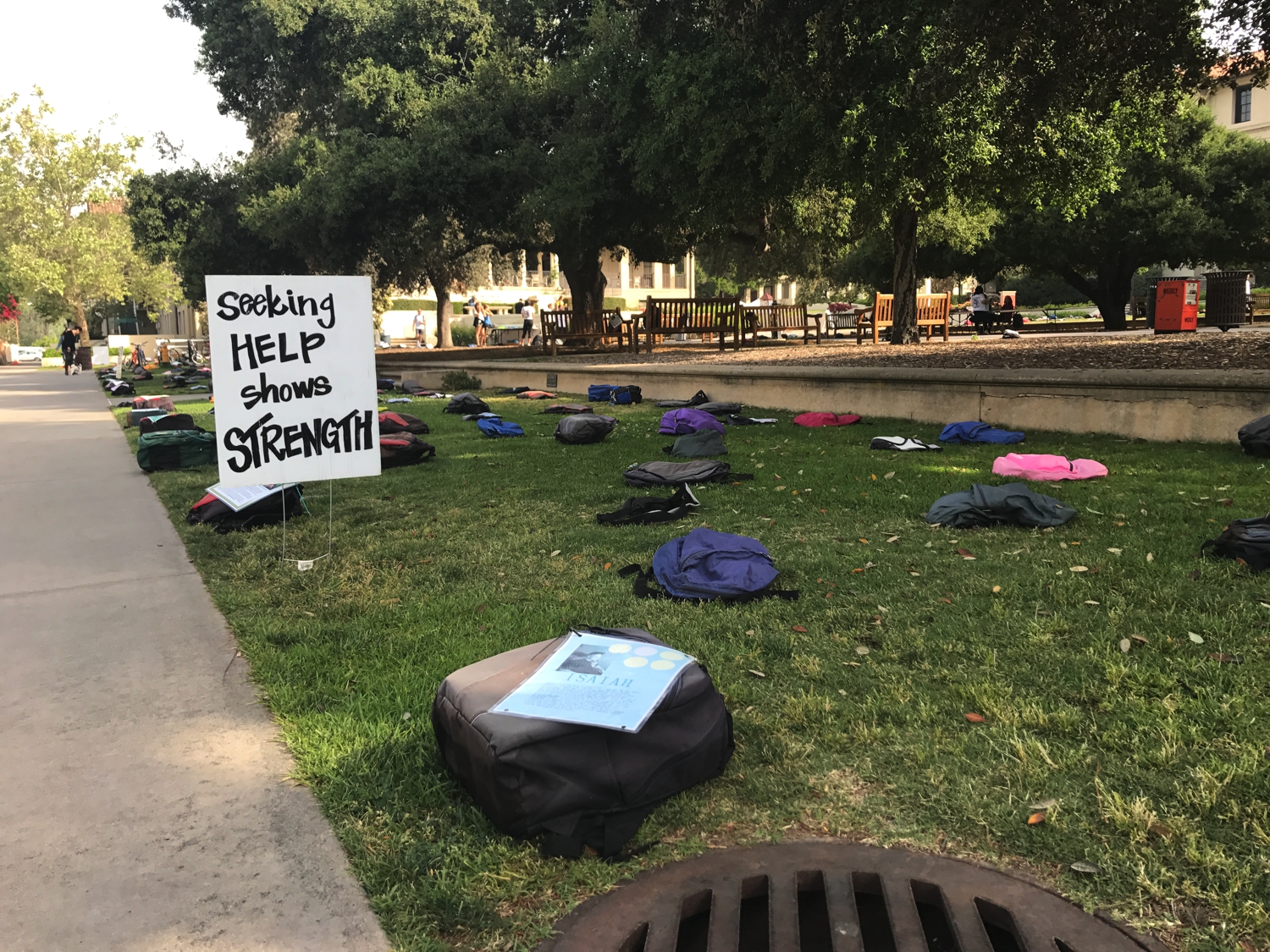 Content warning: Please note that this article contains potentially distressing material concerning depression and suicide that may upset some individuals.

The Occidental College Active Minds (AM) and the Emmons Wellness Center coordinated Send Silence Packing (SSP) Thursday, April 6. SSP is a traveling, interactive installment founded by Alison K. Molmon; it has been brought to hundreds of campuses across the country. SSP aims to raise awareness about the greater impact of suicide, connect struggling students with mental health resources and start an open conversation about suicide prevention, according to their website. The event took place from 8 a.m. to 4 p.m. on the Academic Quad and displayed 1,100 backpacks — strewn about the grass and the benches — to represent the number of college students’ lives lost to suicide each year.

In addition to the display of backpacks, both the National and Occidental AM chapters, as well as Emmons, hosted an information table on the quad. Signs with suicide-related statistics — 44 percent of college students have felt so depressed it was hard to function, for example — were placed among and attached to the backpacks while volunteers stationed themselves throughout the quad to answer questions and offer support for onlookers.

While SSP intended to foster a sense of solidarity around campus by raising awareness for mental health, many students found the event to be controversial due to the display’s overwhelming presence of the event. Moreover, some felt that hosting an event that addressed death so soon after student Davis Xu’s unexpected passing in February was insensitive. Xu’s death was not declared a suicide, but it was shocking and traumatic because of its unexpectedness.

SSP Outreach Coordinator Rob Schicker, who started his position just over a month ago, said that the backpacks closest to the quad’s pathways contained intimate tributes, descriptions and letters of mourning from the friends and family of students who had lost their lives. While acknowledging that such personal narratives can be difficult for others to see, Schicker hoped that the event would encourage meaningful conversation.

When asked how the reaction has been to SSP on other campuses, he said that it has been generally welcomed.

Planning for SSP at Occidental began in October 2016, when Occidental’s AM submitted a proposal to the National Active Minds chapter, according to AM President Tal Medovoy (senior) and Vice President Allison Powers (sophomore). Some students were confused as to whether SSP was planned in response to Xu’s unexpected passing, but Medovoy explained that the two events were not intentionally connected. Regardless, Xu’s unexpected passing still hangs over the Occidental community, a fact Medovoy acknowledged. As such, Medovoy said that Emmons employed extra precautionary measures to make sure students and community members were prepared for a potentially triggering event. Emmons Senior Director and AM Supervisor Sara Semal sent emails to the Occidental community March 24 to inform students and community members about the display, and to encourage taking appropriate measures to avoid the quad — such as being transported by Campus Safety or taking alternative routes — if necessary.

Powers added that another part of the event provided students with the opportunity to heal by writing their own letters to add to an Occidental backpack. Schools like Occidental contribute a backpack with student written letters, which are never read. The backpack then goes onto the next event at another college or university.

“A big emphasis is the power of storytelling as a way of breaking stigma,” Powers said. “We’re hoping the act of writing down and owning your narrative is a way to break the stigma [of mental illness] and to deeply process emotions.”

Many individuals found the location of SSP to be too centralized and, as a result, inescapable. Students must pass through the main quad to access the Marketplace, Johnson Student Center, the athletic facilities and classrooms, among other locations on campus. Hannah Corman (sophomore) said that, while she knows the Occidental Community did not intend for SSP to cause any harm, the location was poorly thought out.

“I believe that [SSP] was very trapping,” Corman said. “It put many students within the community in a compromising position. Passing through the quad is almost inevitable.”

Phoebe Patterson (sophomore) and Tori Funk (first year) shared similar feelings about the overwhelming presence, adding that the location could have been in a less central area.

“I think the purpose behind the project was nice and all, but having all of those bags in the center of campus was what made it super problematic,” Patterson said. “Having the bags on the quad allowed for zero alternative routes for those students [who suffer from depression or may have been triggered], when they easily could have had the bags down by the fountain.”

Funk added that after she declined a pamphlet that a volunteer offered to her, they urged she take it, adding to SSP’s intrusive nature.

Others did not think the layout of backpacks was an impactful way to have a memorial but rather forced individuals to relive their traumas. Aimée Rathle (senior) said that, to her, the backpacks were not the best way to represent lives.

“I know Active Minds wanted to get an impactful message across, and I completely agree that destigmatizing mental illnesses is an incredibly important cause, but using a backpack to represent a life lost (most of which were covered in dust and dirt) seemed to miss the mark,” Rathle said. “[The layout] was an incredibly triggering reminder for a lot of people who suffer from depression or have lost loved ones.”

To Miriam Hamburger* (senior), awareness should not be the major concern at Occidental in regard to suicide. She said that, because many students most likely have either a friend, relative or themselves who struggle with suicide, the energy put into hosting SSP could have been spent in an alternative way.

“The money, time and energy that Active Minds put into the exhibit is impressive, but I would have loved to have seen it go toward student health services,” Hamburger said. “Also, how was someone who feels triggered by this supposed to avoid it? To go to the Marketplace and then to Johnson on a roundabout secret route? To me, that seems like it wasn’t helping students with mental health issues.”

While the event was troubling for many, some students nonetheless found SSP to be powerful. Isabel Norsten (first year) believed that while the content of SSP was challenging for some, the overarching message was necessary in order to bring visibility to mental illness.

“It’s a powerful and such an important [and creative] mode of visibility,” Norsten said. “At the same time I can see that it’s a challenging event for people, but working against the stigma around mental health is important through establishing that visibility.”

Semal reiterated that SSP’s purpose was to foster a sense of community and support for those with mental illness. She added that not having the event would be unproductive.

“I didn’t think it’s appropriate to say that we shouldn’t have this sort of event because it might make people uncomfortable,” Semal said. “Not talking about [mental illness and suicide] is equally as negative. It’s really important to send the message that having thoughts of suicide are normal. This event does a really good job to show that people aren’t alone.”

*Miriam Hamburger is an illustrator for the Occidental Weekly.

Have a tip? Email us at Weekly.oxy.edu or Tweet us @OxyWeekly